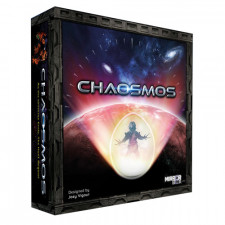 It's the end of the universe as we know it. Reality is collapsing, time is nearing its end, and in just 36 to 48 short turns everything will cease to exist. If youâ€™re lucky, fast and smart enough, maybe these traits will grant you an exception and youâ€™ll survive the end of the universe. Howâ€™s that for a pitch?

You take on the role of one of ten incredibly bizarre-looking alien creatures in search of a mysterious MacGuffin object called The Ovoid. It is represented in the game as some kind of artistic rendering of an egg laid by a chicken forced to listen to an endless loop of Pink Floyd and fed copious amounts of LSD. When time and space collapse, The Ovoid will allow whichever race that possesses it to create a brave new universe in his, her or its own weird image. The races that don't have this MacGuffin in their usually-neon-colored clutches when the clock ticks down to zero are doomed.

Chaosmos is a cardplay-driven game of hide-and-seek with a splash of social deduction and a heavy dose of player-versus-player combat. A number of planet tiles make up a modular game board depicting the Chaosmos universe, and each planet has an associated envelope that contains a random assortment of cards in equal numbers. Somewhere among those cards is The Ovoid. Up to four players start the game in control of their alien's home planet and envelope, one of which may or may not contain the aforementioned artifact that needs to be in hand when the last round ticks off the â€œCosmic Clockâ€.

This all sounds complicated at first glance, and while unboxing the massive number of game components it is easy to feel intimidated or overwhelmed. It's only after flipping through the 16-page rulebook filled with gigantic-font text, full-color reference images, and several pages of optional rules and scenarios that it becomes evident how simple the core mechanics of Chaosmos really are: move, take control of a planet, attack another player, or play a cardâ€”choose any combination of three per turn. All of those extra tokens, unusual planets, and arcane cards are for advanced play or optional elements, allowing you and your friends to play the game in new ways once you've mastered it.

Let's talk about aliens for a moment. And let's put aside the fact that, while colorful and creative, they look like Impressionist art rejects. The ten character options each play differently, with asymmetrical abilities that give each player a style and means to search for The Ovoid that is very distinct and all their own. Like any good game with variable player powers, each alien essentially breaks a rule of the game in a way that makes other players jealous and declare â€œThat's not fair!â€ The inclination to shout this every turn, about every alien's unique ability, is a great indication that plenty of thought and play testing for balance has gone into each special power.

Your alien will leap from planet to planet, and from player to player, digging through piles of cards that include weapons, traps, and special actions that your nemeses have forsaken or kept hidden, basically like an interstellar garbage picker. Many items are useful only in niche situations, such as bio suits that protect two specific character races on planets hazardous only to them, or vaults that lock up a planet's contents and prevent their cards from being taken without an extremely rare key. Attacking another player and besting them in combat allows you to look at their entire hand of cards and take one for yourselfâ€”but if you lose a battle that you initiate, your opponent can do the same to you. Risky business, especially if you have a really powerful weapon to lose and aren't sure that your target possesses The Ovoid.

Mechanically this game fires on all cylinders; it includes deductive thinking, strategic planning and a touch of luck without being completely random. Each play is a unique experience thanks to the variety of aliens, modular setup and vast variety of cards available. Most importantly the design is clean and sleek, devoid of clunky situational rules that bring gameplay to a grinding, rulebook-searching halt. Optional rules and scenarios are offered in plenty, but not necessary for a fun, engaging experience.

Thematically, Chaosmos works beautifully. It really feels like a raceâ€”a frantic hunt with a countdown looming over the game, forcing players to search quickly and then launch their attacks against opponents, with fingers crossed, before time runs out. The art and graphic design scream â€œscience fictionâ€ at an appropriate decibel to immerse players in an interstellar conflict, without pushing that flavor into the rules too much.

There's nothing else even remotely similar to this game on my shelf. As a rabid fan of heavy player interaction and strategic gameplay, I can't recommend it highly enough. Every time it hits my table it sees multiple plays, and results are always fun and unpredictable.