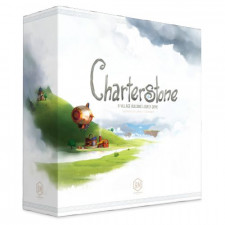 GP: As kid, we used to have Advent calendars to tide us over until Christmas was here. Every day, weâ€™d rush to open the next chocolate or Christmas-themed bauble. It didnâ€™t really matter what it was, the feeling of pulling back the next door was bar none. Charterstone is the first legacy game Iâ€™ve played that has given me that same excitement.

RC: A younger Raf would have dreamed of Advent calendars that provided as much content as Charterstone. An older, Augustus Gloop shaped Raf is thankful that they didnâ€™t. Luckily, Charterstone is capable of delivering a chocolate waterfallâ€™s worth of legacy content without impacting my waistline. I wasnâ€™t quite certain what to expect from this Euro-style legacy but it certainly wasnâ€™t a game where weâ€™d open 4 or 5 crates in a single game. 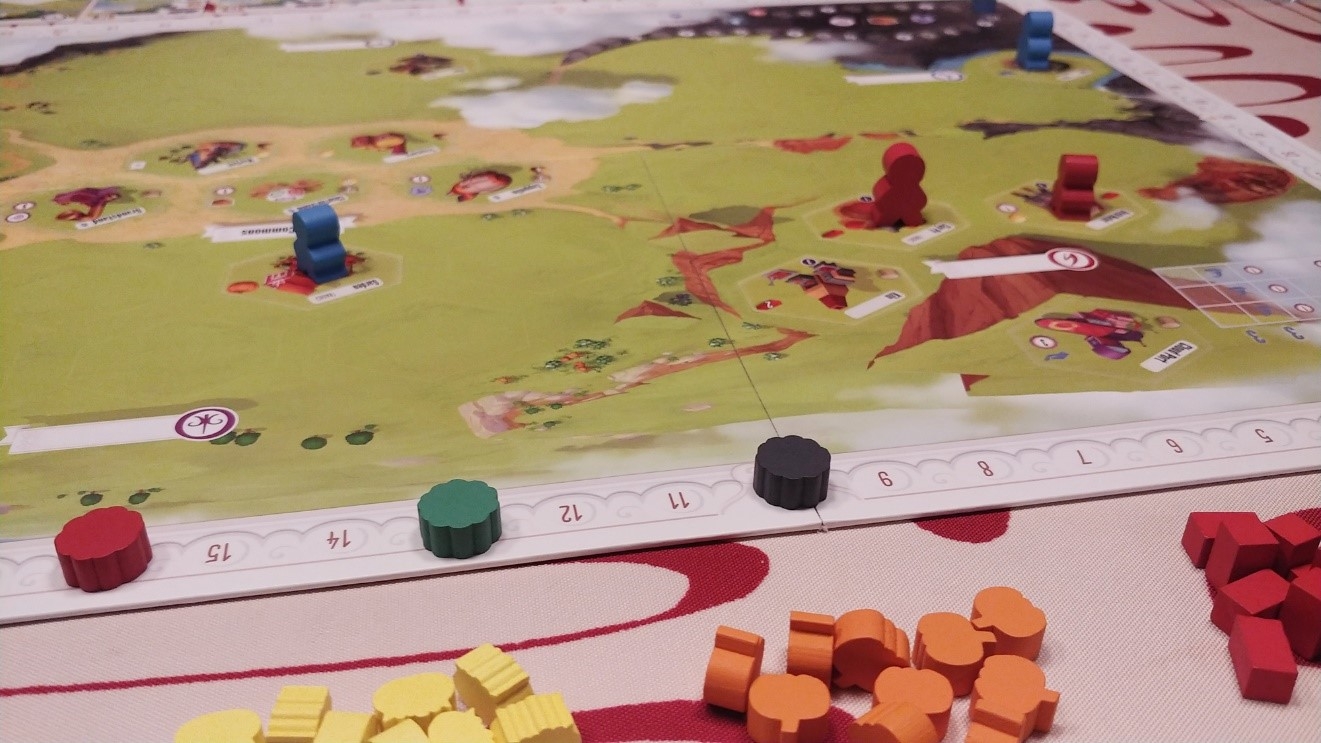 In the beginning, there were pumpkinsâ€¦

GP: The amount of content stuffed into Charterstone is astonishing. It feels like Mary Poppinsâ€™ bottomless bag. Every game, there is a new surprise. You canâ€™t help but push toward finding out whatâ€™s in the box. However, itâ€™s not always to your advantage to do so, depending on each gameâ€™s objectives and guidepost. With little nudges, Charterstone gives you some goals to aim for, without ever forcing you to go about it in a certain way. The game is far simpler than you might imagine a legacy game to be. Your turn simply consists of either placing a worker or retrieving your workers. However, within that, there is a ton of decisions to make. Do you want to try to achieve the guidepost, granting you the power to choose an outcome after the card is scratched off at the end of the game? Do you want to spend your resources opening crates, adding new buildings to your charter, or converting them into straight victory points? There is a sense of discovery to the game, yet you never feel lost or overwhelmed. Itâ€™s also surprisingly accessible to more casual groups since new rules or gameplay changes get tacked on very gradually; itâ€™s not overwhelming.

RC: Iâ€™m not sure I quite agree there. Having a lot of changes and content is a double-edged sword. Itâ€™s exciting to have a constant flow of new buildings, bits, and stuff, but on the other hand it means you donâ€™t get to settle into what youâ€™ve just built. Iâ€™m not the kind of player who enjoys playing the same game over and over and over again, eking out a 2-3 point more efficient engine, so the constant flux in Charterstone works for me. However, some of the people I played with said they wished they could have spent some time living in the little world theyâ€™ve created or exploring each change a little longer.

GP: I think you have to approach Charterstone as a dynamic, living thing. Itâ€™s not a typical Euro in the sense that you can find the strategy you like to use and exploit it game after game. Buildings change and you canâ€™t always do the same thing youâ€™ve done before. Depending on the setup within a certain game, you have to reconsider if you really should be opening a crate, flooding yourself with more cards, or focus on other goals. No matter how you go about it, your charter - the little section of the village that you get to create - organically grows from a single plot to six ever-changing ones. Itâ€™s like your own cardboard blooming onion. 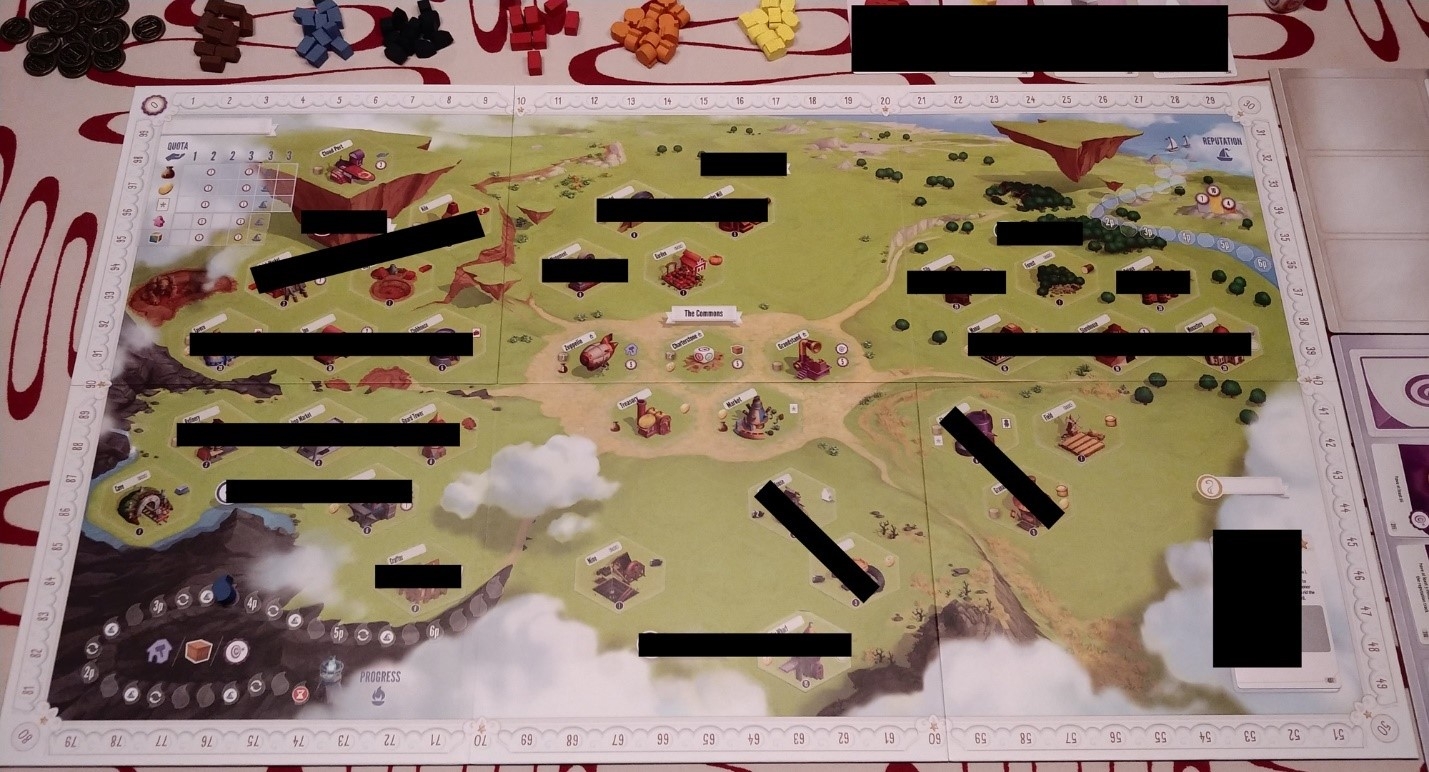 Portions of this image have been redacted for your spoiler-free pleasure.

RC: That dynamism really sets Charterstone apart. I personally loved the fast-paced changes. A game of Charterstone feels as much like a round in a normal game as it does a game in and of itself. There were even some games in the campaign where my opponents made changes to their charter that I didnâ€™t feel I could react to. Rather than spend the rest of the round striving for a long shot win, I began looking to the future and prepping for the next game. Campaign points and benefits are earned at the end of each game so even if you donâ€™t get to declare victory at the end of this particular 45-minute game, you can set yourself up for success if you keep one eye on the future. Itâ€™s a game about growth and evolution; you canâ€™t focus only on the now.

GP: Charterstone feeds you hope too. Even losing a game isnâ€™t all that bad as youâ€™ll still see your charter develop, albeit slower. Though some players may have fuller (and arguably better) charters, itâ€™s hard to be mad about it as everything is still accessible to you. Thereâ€™s also some neat and unexpected twists and turns along the way that make the whole campaign feel more about the journey than the destination. Iâ€™m been blown away with some of the reveals throughout the campaign. Iâ€™m both proud and embarrassed to admit that Iâ€™ve got my Recharge Pack and another fresh copy of Charterstone all lined up for future campaigns.

RC: I donâ€™t have a Recharge Pack yet, but I will likely pick one up. Since charters develop asymmetrically, Iâ€™d like to experience some of the others. I didnâ€™t really like the benefits mine got in a 3-player game, but would like to play through some of the others. In fact, Charterstone is the only legacy game Iâ€™ve played so far that I would enjoy playing again. The permanence in this game drives gameplay systems with a light narrative woven through. Iâ€™m curious to see those systems develop differently; legacy games with a narrative focus lose their surprise. Iâ€™m not tempted to revisit them immediately. By using permanence to make impactful mechanical changes, Charterstone has me looking forward to a second play. I liked this one a lot, and am excited to see legacy systems used in new ways.