Once upon a time I remember seeing one of those â€œas seen on TVâ€ commercials advertising a cushioned Lazy Susan you could place on a chair. Setting aside the fact that this invention, like ninety percent of products â€œas seen on TVâ€ - probably didnâ€™t even work as advertised in the first place, I remember asking myself, â€œWhy?â€ I suppose its creator deemed reclining mobility of the utmost importance. But did the world really need a swiveling posterior pillow? How did someone not warn inventor and manufacturer anywhere along the process, â€œJust stop! We donâ€™t need this!â€

Chocoboâ€™s Crystal Hunt is the cushioned Lazy Susan of card games. Iâ€™m not sure why it was made or how it got through the development process without someone saying, â€œHey, wait a minute. This really isnâ€™t a game.â€ The gist of the design - and I use that word lightly - is to randomly pick cards from your opponentsâ€™ hands hoping to take particular types and collect enough to mercifully end it all.

In case youâ€™re a video gaming simpleton, like me, who has never heard of a chocobo, itâ€™s a popular flightless, mountable bird from the infinitely successful Final Fantasy video games by Square Enix, not incidentally also the publisher of this little card game. If you are an avid fan and patron of the RPG line and have desperately searched for a board game which captures its world and spirit, do not buy Chocoboâ€™s Crystal Hunt. The only thing remotely similar is artwork. Even then, I couldnâ€™t tell you from which of the dozen or so Final Fantasy games these avian representations come from. Unfortunately, like the bird itâ€™s named after, the game is flightless.

Each player begins with a fat chocobo and two other random cards. These include little chocobos, crystals representing one of the four standard elements and monsters. On your turn you draw a card and use chocobos to hunt for crystals. Hunting involves picking a player and randomly taking a card from her hand hoping itâ€™s a crystal, which you keep. If you used your big bird, your turn is over whether or not you successfully find a crystal and return it to your hand. If you used the little one, you can go again, although you discard the chocobo if the hunt failed. If you picked out a monster card, something bad happens to you (not terribly) and your turn is over. As soon as someone collects one crystal of each element or six total, she wins. 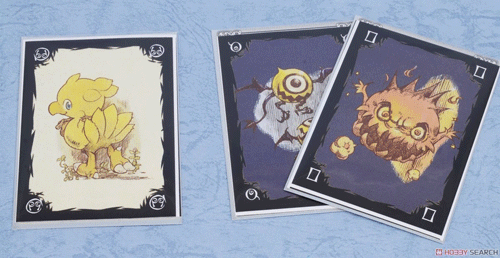 Well, at least the artwork is cute.

What invariably happens is that one player starts to gather multiple crystals and immediately becomes a target because everyone else knows what she has. One or another then subsequently depletes her hand, but now everyone is aware who the new leader is, who becomes the next unwilling crystal dispenser, and so on until one player is able to string together enough successful hunts with their little chocobo, usually from the same chumpâ€™s hand, to meet the victory condition.

The problem is this really isnâ€™t a game. In a day and age with smart, sophisticated and stimulating designs to the tune of about 1,000 a year, an Old Maid variant with anime artwork isnâ€™t going to cut it. Not even a paper cut. Itâ€™s not the size at issue. Small card and micro games can stimulate and entertain with eminently economical components and time constraints. Love Letter, Coup, and Monster My Neighbor are all interesting and engaging titles with extremely simple premises and a small deck of cards. Thirty years ago, this might have passed muster. But tasking players to merely draw cards from others with a wealth of known information is frankly lazy design not remotely worthy of the modern hobby.

As I consider myself a fair man and believe that every game has a purpose and a place, I will begrudgingly allow that Chocoboâ€™s Crystal Hunt would work with very young children just getting brainwashed in the hobby, or with older kids as diverting filler. It reinforces basic logic and raw risk management. Also, since you keep your fat chocobo, you can hunt at least once every turn. But this doesnâ€™t come close to challenging kids with even a modicum of gaming experience. And while Iâ€™m being magnanimous, the Dungeons and Monsters expansion releases in June, so perhaps that will add constructive content or at least some mechanism to make the design worthy of its â€œgameâ€ label.