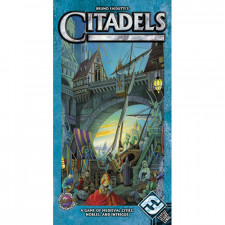 Do you like to be mean? Do you strive to not only win, but to make sure your opponents lose? Is the taste of your friendsâ€™ tears like sweet nectar to you? If so, then you definitely want to take a look at Citadels. Because that game is all about being mean. Sure, thereâ€™s this whole city construction thing. But thatâ€™s really just to give you another avenue for good natured cruelty.

Players are attempting to build a city using cards in their hands. Each card represents a district and has a cost in gold coins. To play the card, a player pays the cost and it is placed in front of him. Districts come in four normal colors as well as a fifth color whose buildings provide unique powers.

But it isnâ€™t so simple as just playing cards and spending money. Each round begins with the players selecting from eight roles. First the roles are shuffled together and one is removed at random. Then the first player gets to pick. Thatâ€™s passed to the next player and so on until the last player has two cards left. He picks one and discards the other.

The role cards are numbered one through eight and each is called in turn. So, even if you were first to pick, you donâ€™t actually go unless you picked the first role â€“ the Assassin. Each role has a special power. The Assassin, for example, names another role. The player who picked that role loses their turn for the round. Second is the Thief who names a role other than assassin. The thief gets all the money of the player who took the named role.

Other cards are more helpful. The Merchant gets you coins (with a bonus for green districts) and the king lets you go first in choosing role cards next round (plus getting coins for yellow districts). But last of all is the Warlord. Not only does he give you coins for red districts, but he allows you to destroy a building that an opponent built by paying one coin less than its cost â€“ meaning one-coin buildings are free to destroy.

The game goes until someone builds their eighth district. At that point, the round is finished and the player who has the most expensive district is the winner.

In case I was unclear, the game is brutal. You can be killed and lose a turn. You can have your money stolen and effectively lose a turn or two while you try to grab more. You can finally build a district only to have an opponent destroy it with the Warlord. Citadels is not for the thin-skinned.

But, the game has a central mechanism that makes those powers risky. Simply put, your opponents cannot be sure what role card you took. So even if I wanted to assassinate you, I couldnâ€™t choose you directly. Iâ€™d have to try to figure out what card you took and then guess that role. And if you didnâ€™t take it, then Iâ€™d end up killing someone else or even targeting one of the randomly discarded cards.

Citadels, then, is about bluffing and doublethink as much as it is about building a city (and making the other builders cry). Sure you need money. And the merchant role might be the best way to get that money. But everyone knows that. So maybe you skip him and take the Bishop instead. That way, an assassination on the merchant misses you. Or, does the player who took the assassin already know that? And would strike your second choice instead? In which case, you should take the Merchant after all. Clearly, I cannot trust the wine in front of you.

If you can enjoy or at least, get past the take-that, cutthroat nature of the game, Citadels is actually pretty darn fun. The bluffing element keeps things interesting and the powerful early roles, like assassin and thief, keep the rest of the players on their toes. Going for maximum efficiency by constantly choosing the best income and drawing the most cards is likely to get you killed and turns lost. So there is a careful balance.

Citadels is also a great game for casual gamers. Itâ€™s easy to understand and there are no special rules or exceptions that intrude on the game. Yet, it has enough other elements to distinguish it from other, more mainstream titles. In fact, there can be many tense decisions every round as you struggle with what role to take and how to use your special power. Essentially, thatâ€™s the game- choosing the role that benefits you without being targeted for annihilation. The city building and all the rest of it is just dressing.

Citadels goes over well with thick-skinned players who find glee in stomping one anotherâ€™s plans. If howls of pain are often followed by giddy laughter at the misfortune of a friend, then Citadels is where you want to be.