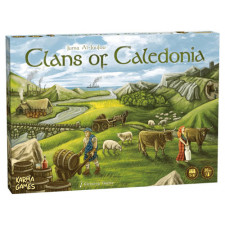 The world is turning from small time agriculture to big time agri-business. And you want to get your piece of the new system. In Clans of Caledonia, the players take the role of a Scottish clan at the dawn of the industrial revolution. No longer content to merely grow and trade locally, the clans are out to establish themselves by growing particular crops and exporting them to the wider world.

Each player starts with a whole slate of potential buildings and workers. A number of clans are dealt to the table â€“ each with a unique player power. Similarly, a number of starting goods tiles are randomly attached to each clan. Then, the players draft the clans. In this way, special player powers arenâ€™t dealt randomly, but are chosen as part of pre-game strategy.

The main board is made of four reversible tiles which allow for different configurations from play to play. The spaces have grass, forest, mountains, lakes (lochs), or some combination of them. To begin the game, each player places two workers down on the board. They still have to pay for the cost of the worker and the land, but this way you have a base of operations from which to build.

Although you start with a fat wad of cash, that quickly dissipates. In fact, each round the players will take turns selecting various actions. Almost all of them cost money and you just keep going until all players pass. Luckily, the game is pretty good about giving you more money each round. There is a passing bonus for players who pass early, your workers provide a healthy income, and money is often available when exporting. 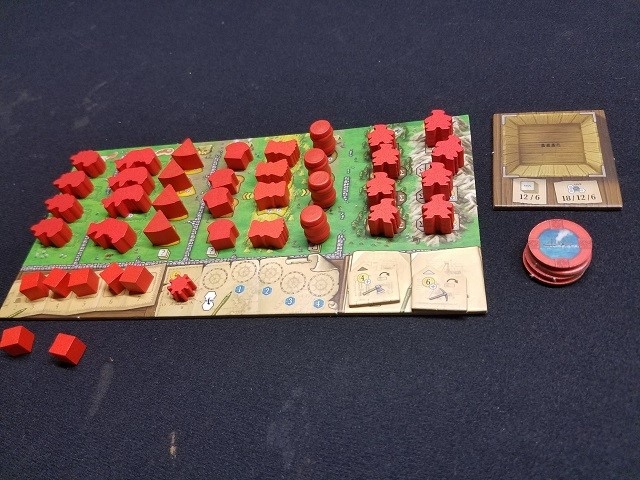 During the main part of the round, players tend to take actions until they run out of funds. They can expand into new areas of the map by building new industries. Sheep farms, cowherds, and wheat fields will produce the raw goods of wool, milk, and wheat. Meanwhile, dairies, bakeries, and distilleries will take those raw goods and turn them into cheese, bread, or whisky. All of the goods can potentially be exported. And they can also be sold locally.

One of the more exciting features of Clans of Caledonia is the player driven market. While prices are initially set, they fluctuate strongly from there. Every time a player buys a good locally, the price rises. When it is sold locally, it falls. Players might be stockpiling a certain resource waiting for the right price. Or when a market is glutted, decide that itâ€™s better to simply buy the good than invest in that particular industry. The market can sometimes open up unexpected opportunities and gives the players more freedom in their strategies.

Meanwhile, a separate export board tracks the available contracts as well as the round bonus. There are several bonuses available and, at game start, one is randomly assigned to each round. At the end of the relevant round, the bonus is checked and players get points depending on how well they completed that roundâ€™s task. The bonuses all seem appropriately priced. They arenâ€™t so hefty that avoiding one will cost you the game. But they are too nice to be completely ignored. The gains from round bonuses can often be the necessary difference at final scoring.

Clans of Caledonia is played over five rounds. This game length feels just right. Long enough that your strategies have time to mature and you feel like youâ€™re finding success. But not so long that the game drags on or has time to become dull. 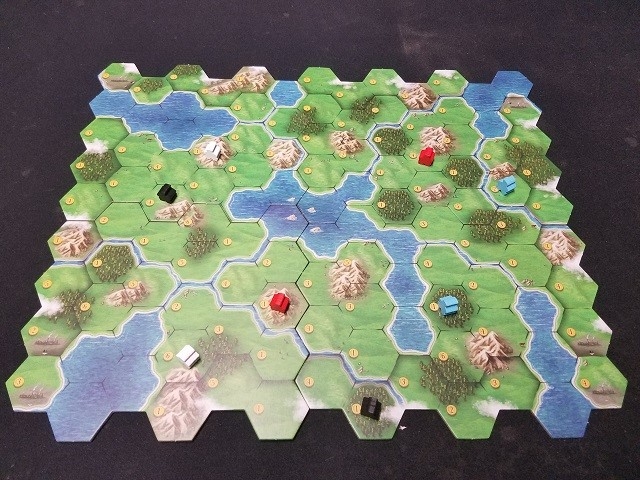 This is not the first economic game, nor the first to heavily feature production and trade. But it is easily among the best. Clans of Caledonia provides players with a wealth of options. And, despite the multitude of choices, this isnâ€™t the sort of title that drowns those options in a cacophony of points. Instead, you are given numerous roads that, hopefully, will lead to the same destination.

Mixed within the long-term economic strategy is a smattering of tactical maneuvers â€“ thanks, in large part, to the spacial element. In some ways, the sense of building up, choosing your own path, and outmaneuvering your opponents is not entirely unlike a civilization builder. Caledonia isnâ€™t that, but it provides that same feeling of development, and a similar freedom to pursue any strategy you fancy.

With all of these amazing features, the game feels vibrant, exciting, and novel. If heavy euros â€“ especially economically flavored ones â€“ are your thing, then Clans of Caledonia is definitely for you.