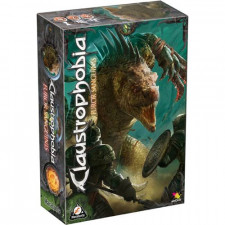 Claustrophobia is a fantastic two player dungeon crawler. From a high altitude, each player rolls dice to determine their capabilities, then assigns those dice. But the great thing is that the two sides are totally asymmetric. The way that the humans use their dice is materially distinct from the demons. Furor Sanguinis expands the game by offering a third faction: the Squamata.

Unlike the other two factions from the base game, the Squamata is represented by a single pre-painted miniature named Kartikeya. This monsterâ€™s origin is somewhat mysterious; but it appears to be an extremely powerful and sentient demon with motives of its own. For game purposes, though, Kartikeya is neither human, nor demon and will fight one or both of the original factions.

In the base game, humans were fewer but had more power than the demon player â€“ especially the troglodytes who were mostly cannon fodder. The Squamata faction puts that on steroids by reducing the units for one side even further. There is only one unit, so the Squamata player canâ€™t leave forces behind to block the entrance of troglodytes. The Squamata player also misses out on using Impressive units to prevent movement and guard more fragile characters. But it makes up for that lack of utility by crushingly powerful abilities which render it a fearsome force on the board.

Kartikeya acts like the other factions, for the most part. It rolls its four green Squamata dice at the start of its turn and then assigns them as they like. As with the demon player, the Squamata has one main board where different combinations of dice can be assigned. The board is divided into four sections representing Kartikeyaâ€™s legs, torso, head, and arms. Dice assigned to the legs can increase movement. The arms control combat. The head and torso have a number of different effects including increasing dice for later turns or healing.

Kartikeya takes damage somewhere in between the human and demon method. It has health points but they are assigned to each body part. Three to the legs. Four to the torso, etc. When Kartikeya takes damage, the player may assign that damage to any part. But if a bodily section fills up, it is destroyed and no dice can be assigned in that area. Kartikeyaâ€™s base stats are only average. But with the right dice assigned, the beast becomes nigh unstoppable. The trouble is, there are lots of good places to put those dice and the choices can be difficult.

Like all of Claustrophobia, Furor Sanguinis is scenario-based. The expansion comes with six scenarios, each featuring the Squamata player. All but one pits the Squamata against the demon player. The first scenario is of the â€œget to know yaâ€ variety. It features Kartikeya sniffing out the crushing demon and then attempting to destroy it. Meanwhile, hordes of trogs attack Kartikeya and attempt to take it down. Or at least weaken the rampaging Squamata enough that the Crushing Demon can finish her off.

From there, though, the scenarios provide a wide variety of play experiences, about on par with the base game. There are kill quests and fetch quests, escapes and invasions. The one negative is that so many scenarios are focused on Squamata versus demon. A few more scenarios allowing the human player to go toe to toe with the Squamata would have been nice. Of course, the humans are largely outmatched by Kartikeya stat-wise, and the one included scenario requires several special rules. Even if special scenario-specific rules are needed, a few more would have been nice. I hope that new scenarios will be added via the website as they have been for the base game.

Still, Kartikeya is not monolithic. It comes with a number of special power tokens. The scenario specifies which tokens it will have in play. This helps to keep the experience of playing the Squamata from being too formulaic or repetitive. So, if it needs to be more powerful, it gets more. If it needs to be toned down a bit, it can receive fewer. But itâ€™s never not powerful. Kartikeya is beastly in any configuration.

My one gripe about Furor Sanguinis is that, despite introducing a third faction, it did not take the opportunity to introduce more rules or scenarios for three player games. With Kartikeya, the opportunity was surely there for something with humans, demons, and Squamata all battling it out. Why not? There is only one scenario that alludes to the possibility of a three player game, it seems to me a lost opportunity. Maybe the game bogs down too much, or maybe there are other legitimate reasons. But I think, at the least, there will be fan-made scenarios for three players in the near future.

Aside from that disappointing omission, though, Furor Sanguinis delivers. It provides more variety and those fans who feel like theyâ€™ve fully explored the other factions have a totally new one to delve into.