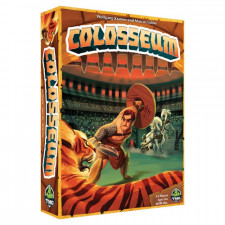 Some games are simply timeless standards that hold up to all manners of scrutiny, yet remain unscathed and enshrined as classics. Others, however, were never really viewed as classic but erupt into the collective consciousness of the gaming continuum as a classic upon a reprinting or reskinning. Colosseum is precisely one of those games. While some of us had played this Kramer masterpiece back when it was a Days of Wonder title, it wasnâ€™t marketed well and never really got the attention it deserves, especially considering its parentage. This new version is an upgrade that should not be overlooked. It is an exemplary design capable of satisfying both casual gamers and strategy aficionados alike. 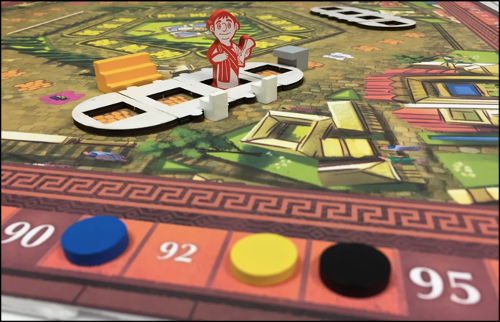 The glory that was Rome, etc.

The setting of the game is the Roman ludi circenses- the gladiatorial arena. Unlike one of my all-time favorites, Spartacus (Gale Force Nine), this game is more of a management-level view as it revolves around the arrangement, marketing, and political aspects. Your goal, as the owner of an arena, is to attract as many spectators and politicians as possible while putting on the greatest show to date. This is accomplished through bidding on markets for the actors and props which are used to fulfill playbillsâ€™ requirements, thus providing you points. There are other key elements which make the game what it is, such as upgrading your stadium and building box seats for the politicians, but at the end of the day, this is a game of weighing cost benefits and predicting what other players will do.

Most of the game is spent buying assets and the playbills that require them, but one of the most interesting bits is by hosing opponents out of gaining audience with politicians through the oft-maligned roll-and-move mechanic. Itâ€™s not a massive part of the game, but its influence on the game state cannot be understated. Essentially, the pols meander around the board, taking in the sights, and it is incumbent upon the players to ensure that they are at worst not in an opponentâ€™s venue when shows occur, or at best, in your venue. There are three ranks, with six in total, of these little influencers mulling about and their level of importance is commensurate with their value to players. While it can be frustrating not rolling well and giving up points to the opposition, that consternation is fully eclipsed by the glee evoked in players when they manage to screw two opponents over and gain the upper hand. 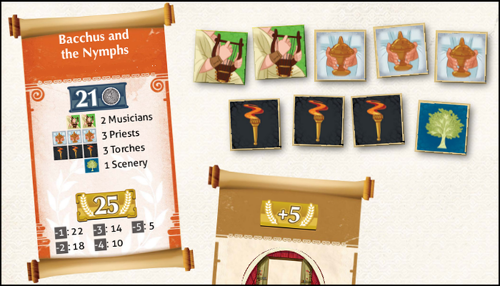 But will this show bring in enough revenue to warrant Bacchus and the Nymphs 2: Nymph Harder?

If thereâ€™s any criticism I can levy at this game, itâ€™s that thereâ€™s no real, direct player interaction as with so many European style games. Considering this game shares lineage with the visionary that brought us El Grande, Colosseum is most assuredly the artistic and whimsical brother when viewed against Kramerâ€™s brilliant and talented son, El Grande. It's very passive-aggressive; you can only screw with other playersâ€™ plans so much. You are limited to disallowing them access to politicians and resources but canâ€™t really send in a goon squad to go smash up the opponentsâ€™ windows, for lack of a better analogy. Despite my predilection towards games where you punch people in the face versus stabbing their cousins quietly in the back, this little gem of a game absolutely delivers a full dose of fun. Between the art, beautiful components, and gameplay, youâ€™d be hard-pressed to find a game which gives so much in such a light-weight, relatively fast, and relatively inexpensive package. When you consider the awesome metal coins and several art styles on the meeple stickers, this is a masterpiece to behold.

Iâ€™ve found over the years that Tasty Minstrel games Iâ€™ve been exposed to donâ€™t particularly resonate with me or the group I play with most often, but this game is a pleasant surprise. Theyâ€™ve always had quality high on their list, with exceptionally well thought-out artistic and graphic design, high-quality components, and smartly organized rules. This game is no exception, but because the game is a reprint of a game I already liked, I really hoped their treatment of the game would elevate it from a good game to a great one. It turns out that I underestimated them, because this new version is the best edition of the game to date.

The long and short is that if you can tolerate the uncertainties that come with rolling dice and enjoy lighter European games, this will likely be on your forever shelf, as it is on mine.