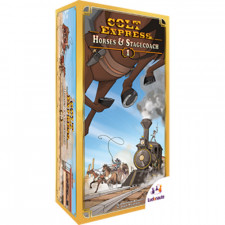 While Colt Express won the prestigious 2015 Spiel des Jahres, it never quite blew me away. It's an enjoyable entry-level programming game that requires 5-6 players to really hum along. The only reason I kept it in my collection was for the excellent 3D train. And well, for the Horses & Stagecoach expansion.

I always felt this game needed just a touch more depth, complication, and nuance to really give its participants something to chew on. This expansion does just that, offering a dangerous Stagecoach riding alongside the bustling locomotive for players to loot and pillage. We have new opportunities for wealth accompanied by new bouts of danger.

One of the first really interesting additions is the new setup mechanism where players determine in which car they start with a blind bid of sorts. Each participant takes either a horse or robber into their hand and simultaneously reveals. If you chose the human you board the train on the current car, otherwise you keep riding and we move up one car from the rear. There's a really nice level of tension here that forms a strong connection to theme in that it simulates you riding farther along on your attack route before boarding the iron giant.

The new wooden horse meeple (heeple?) is added adjacent to your train car when you deploy. With the new Ride action, you can hop on a nearby horse and move forward or backward up to three car lengths. The horses will remain where the players dismount so they may spread out or bunch up in odd ways, acting as a sort of dynamic terrain element that players can manipulate. This causes consternation and hilarity in the programming of actions as you may expect a mount to be there when a player comes right under your nose and rides it off towards the caboose.

The stagecoach is the main attraction as itâ€™s presented as a gorgeous cardboard 3D model, similar to the locomotive from the base game. It begins play adjacent to the train-car closest to the engine, and moves one car towards the rear each round. You can hop inside the coach by mounting a horse or approach the roof with a standard move action.

There are two areas of interest here which present alternative challenges and benefits. The roof is vulnerable because everyone up top on the train can target you. There's also a shotgun toting guard who's protecting a strongbox that will fire away if you get in his path. If you deal him a haymaker he'll fall atop the main train, leaving him to mess with those on his new turf. You can then take the strongbox and high-tail it safety.

The inside of the stagecoach houses several bystanders who can carry a conversation and offer a warm seat to rest on. Oh, and you can take them hostage. Yes, we're not just snagging sacks of coin and jewels anymore, but good 'ol red blooded Americans to be ransomed off at the next stop. Each offers a solid monetary reward but also an inherent disadvantage which will hamper your efforts.

The three available hostages for the game are dealt out from a random deck adding variety and replayability. They're first come first serve so there's a real solid incentive to gun for the stagecoach relatively early and select the passenger that best fits your intended strategy. Some will offer more reward based on the number of diamonds you collect, others will list a generous money sum but will restrict you from riding a beast of burden or running fast along the roof of the train.

While the horses and stagecoach are the main elements at play, this expansion gives us some new event cards which interact with the new elements and offer some new twists. The real selling point for the overall package is increased variety and propping up the depth of an otherwise simple game. The different aspects work in unison to achieve this goal and present a memorable experience of chaos and agony.

When the new setup is sprawled out on the table and you take a step back, the visual element really lifts the entire experience up a definite notch. You'll notice mounts missing from their position and realize Jennifer is making little horsey sounds, galloping through the air with glee.

Colt Express isn't going to blow your hat off but it's an undeniably enjoyable game that sits on the lighter end of the spectrum. Throw in a fast moving stagecoach and a corral of horses and all of the sudden we're taking the 3:10 to squee-town.