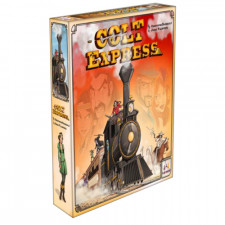 Let's talk about how to rob a train in the Old West.

You'll need a six-shooter, preferably a pair of them. A bandana to conceal your identity. A strong, swift horse capable of riding down from your hiding spot and keeping pace with the train long enough to hop aboard. Dynamite to blow the strongbox built into the storage car. And take care not to forget your satchel, otherwise you'll be stuffing your trousers with wallets and necklaces like a tenderfoot.

Of all these essentials, the most fundamental is a solid gang, the sort who'll stick to scaring the passengers rather than robbing them with one hand while they slip your pocket watch from your vest with the other.

Unfortunately, it's precisely that last detail that the bandits of Colt Express have neglected. Hence, while your goal is to steal as many purses, gems, and briefcases of cash as possible, there's no reason you can't nab them off your fellow thieves.

The first thing anyone notices about Colt Express is how good it looks on the table. Each of its train cars are fully three-dimensional, a locomotive at the front and passenger cars pulled behind, with space both inside the cars and on the roof for the bandits to navigate. It even comes with entirely nonessential cute-as-buttons cardboard cacti and cow skulls that can be repositioned to represent the train's relentless forward motion, though in practice these tend to be remarked upon more often than used.

Curtains aside, the gameplay revolves around each bandit programming a set of four or five moves in advance, placing cards that represent their intended action into a deck at the center of the table. Eventually that deck will be flipped over and resolved: Tuco climbs onto the roof, Cheyenne punches Belle and sends her reeling into the next passenger car, Belle seems not to mind and steals the gem off a panicked pilgrim's neck, Tuco runs along the roof, leaping from car to car, and so on.

As far as programmed movement games go, it's a simple one. Visualizing where all the bandits are â€” or will be once another couple cards are resolved â€” is relatively easy thanks to the layout of the train, which provides room to maneuver but never so many spaces as to become confusing. Better yet, it's not a particularly serious game. Getting shot means you just add a wound card to your deck, making it less likely to draw the cards you want because your character is busy tending to their injuries. Getting punched staggers you into an adjacent car, though clever players will figure out how to use this to their advantage in no time. In short, there's no death, no getting gut-shot and festering for hours in the sun, and no permanent setbacks. It's so easy, so lighthearted, that it's even suitable for youngsters.

But don't let that prevent you, a Very Serious Boardgamer, from giving Colt Express some consideration, because this has become one of my favorite programmed movement games, especially as a gateway drug for the half-convinced. It even comes with a couple wrinkles that keep it interesting for an old lump of coal like me.

For one thing, I love how the actions can be used in different ways depending on your bandit's situation, giving you a way to trick your opponents even when they're watching the deck like greedy hawks. Take movement, for example. This will let you move from one car to another, but only if you're actually inside the train. Climb up on the roof, free of passengers and dining tables, and you can run all over the place. Same goes for shooting, a severely limited action that opens up once you're up top. The thing is, however, that at the beginning of the robbery all the good loot is in the actual passenger cars, patrolled by a sheriff who will gladly poke a few extra holes in your hat â€” so play the sheriff card to move him away or to harass your opponents, or punch their lights out if they're hiding in a safe spot, forcing them to drop some of their loot.

What's more, every so often the train will go through a tunnel, the sudden darkness forcing everyone to play their next card face-down. Now anything goes, giving you a chance to slip away and break everyone's line of sight on what your plans are, at least for the time being. Each of the bandits also adds their own dash of flavor, from Tuco's dirty technique of shooting through the roof to Belle being so scantily clad that the other members of her crew can't bring themselves to shoot her, at least not if there's another target standing nearby.

Ultimately though, the real draw of Colt Express is found in its sense of light fun. It isn't going to revolutionize the programmed movement genre, nor does it set out to. Instead, it's a fast-playing, laugh-inducing take on its subject matter, a game where you can have everything planned out, only to instead find yourself punched straight into the sheriff's burly chest, shot, trying to scoop up some loot that isn't there, and then running back into the sheriff's arms for a second dance. If you weren't so busy bleeding and being poor, you might even laugh.