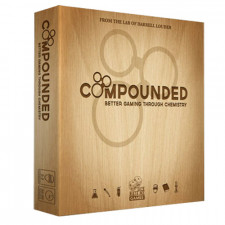 Board game randomness comes in various forms and is met with varying degrees of enmity by gamers. Dice rolling is a traditional blood-boiler among the cube-pushing crowd, and may be behind the moniker of Compoundedâ€™s publisher, Dice Hate Me Games. Games like Compounded shun the evil dice in favor of uncertainty generators such as drawing elements from a bag. The belief is that, like a deck of cards, all options will be chosen eventually. In theory this is true. But when the method involves a hundred plastic elements, roughly a dozen of which are drawn in a given turn and returned to the bag every second or third turn, then the randomness can derail an otherwise-fun game before it gets to the station.

In Compounded, two to five scientists race to place randomly-drawn elements onto claimed compound cards before others do or before an unforeseen lab fire destroys their work. A periodic table does little more than keeps score and this makes my wife sad; sheâ€™s a fan of Dr. Mendeleevâ€™s creation and wanted to see it play a bigger role in the game. Myself, Iâ€™m a proponent of bargaining in games, and was also disappointed that the trading of elements between scientists didnâ€™t play a more prominent role. But when all cards (and playersâ€™ elements) are on the table itâ€™s nigh-impossible to achieve that Catan-like nerdvana of conning an opponent into trading you the game-winning piece. Instead, trades take on the real-life quality of being mutually beneficial. This lessens the gameâ€™s fun, and combined with the bag quantity dilemma it makes it hard to stop a runaway leader, especially at the lower player counts. â€œI never drew any oxygen the entire game,â€ muttered the player to my right, despite red gems comprising one fifth of the bagâ€™s total.

A rule allows the three-for-one trade of a particular element with one from the bag, but this can only happen after a player with too many elements is forced to discard extras, making most turns an exercise in optimizing a random draw and leaving few strategic choices to the scientists. Focusing on completing a compound before your opponent reaches fifty points or it catches fire is paramount, nudging the game toward the dreaded multiplayer solitaire adjective, but also lessening downtime and overall game length. Thereâ€™s a definite sense of engine building as skills are increased, lab tools are acquired and compounds are completed at an accelerating pace, providing a sense of accomplishment. But not opening up more viable alternatives. Players can make fire extinguishers to save their compounds from a lab fire, but often elements are better employed to complete the compound before it catches fire, and shifty scientists can claim a compound an opponentâ€™s got their eye on. Unless that scientist can complete it, the move becomes nothing more than a wasted scoring opportunity. The ability to place more elements per turn due to the playerâ€™s growing scientific prowess does lead to risk-taking and the partial completion of unclaimed elements, but perfect knowledge of opponentsâ€™ caches lessens the tension.

At the risk of losing my scientific tenure, I should clarify that Compounded is a good game, just not a great one. Itâ€™s accessible for kids and families (be excited/warned, parents: your children might actually learn how things are made), has good artwork and component quality despite having to self-sticker the wood tokens, and each game is a tight race to the finish line. The rules take a bit of time to grasp, but are rarely consulted once the atoms start flying. Compounded has a decent theme even if itâ€™s sacrificed for mechanics in certain areas, like the notion of a scientist in a lab having to blindly acquire arbitrary elements and try to create things from them. Then again, this could be replicating government work. Iâ€™ll check the rulebookâ€™s introduction again.

Included variants up the difficulty for experienced chemists and even give the opportunity to collude on a compound and share the spoils. Lab tools acquired after an elemental blending allow more efficient work, extra element draws and even the creation of fires on opponentsâ€™ workbenches, allowing for a bit more player interaction as the game proceeds and expanding the game experience by a few molecules.

These bits keep Compounded firmly in the good range, offering solid a gameplay challenge, but the lack of truly viable alternatives make every game a â€œrace to Tin,â€ as my wife put it (Sn being element number fifty on the chart). Thereâ€™s enough strategy for casual gamers to get involved and feel like they have a decent range of choices without being overwhelmed, but hardcore scientists may find the beaker a bit too shallow after time.