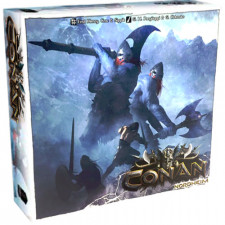 When Conan hit back in January it received a solid amount of love from The Review Corner. We've been eating it up and playing the heck out of it since, yearning for more tales of the Cimmerian. Our cries for help have been answered by the dark gods as the Nordheim expansion is here, and it's damn big.

By big I'm not simply referring to those excellent frost giant minis that are sucking cold air and ready to break you in half. We also have a huge board featuring unique terrain, a new hero, several different enemy types, and four new scenarios that at minimum match the quality of the base game content. As a whole this is roughly on par with a standalone boxed game in terms of sheer content.

Let's first talk about Niord, the feral Viking dude that joins Conan's band. This guy is a beast in his own right as he's ambidextrous and extremely capable on the defensive end of things. Being able to dual wield is a great deal of fun and he certainly comes across as a shiny new toy to experiment with in the bloody snow.

Bloody is absolutely the correct adjective. The new map is double-sided and packed with beautiful detail. You have felled horses and murdered warriors amid frosty pines. One side features a huge hill in the center of the battlefield which provides some visual trickery to heighten the giants' stature. Both options feature large swathes of open terrain very alien to the geography found in the base game. This broadens the experience and adds a unique quality to play that helps cement the personality of this expansion. 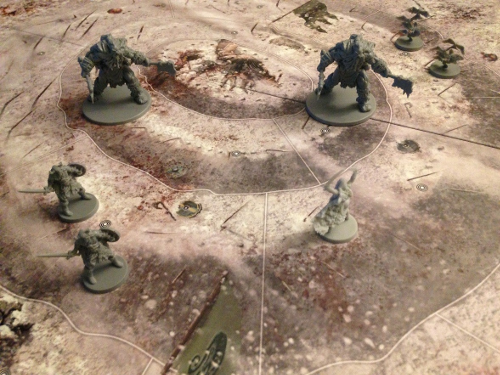 Iâ€™m getting flashbacks to King of the Hill in elementary school.

A gorgeous map is useless without well-tailored scenarios. The duo responsible for this new content is French designers Croc and Sippik. Croc in particular is well known for his work on the now classic Claustrophobia. His name brings a strong pedigree and interest level to this extension. His work does not disappoint.

One of the chief concerns I had going into this release was whether they could capture the spirit of one of my favorite Robert E. Howard stories. â€œThe Frost-Giant's Daughterâ€ was among the early Conan tales and it forms a very compelling narrative tightly woven with suspense and wonder. Alongside â€œThe Tower of the Elephantâ€, it doesn't get much better. My concerns were unfounded as this team came through like a massive tree-trunk club to your grill. Just smile and let your Chiclets go flying.

The first thing worth noting is that each of the four offerings is aimed at a different player count. This is nice as it allows for wider opportunity to get the game to the table. Each offers solid replayability and are worth tackling from different strategic angles. They also feel pretty well balanced as a whole with both sides remaining competitive up until the closing bell.

The new flock of crows enemy unit is one of the more intriguing and understated elements utilized. The giants draw all the cat-calls and winks but these little suckers will peck the hell out of your emboldened warriors. The last game I played I felt like Tippi Hedren as I stumbled about the basement bleeding from multiple puncture wounds.

At the opposite end of the spectrum, the frost giants do not disappoint. It will take a play or two to become fully comfortable in how to best utilize their strengths, but when you do, watch the hell out. They're capable of extremely aggressive force and can lay a beat down like Eminem at an open mic. You'll find players arguing over who gets to play the Overlord, which is a nice change of pace from arguing over who gets to play Conan. 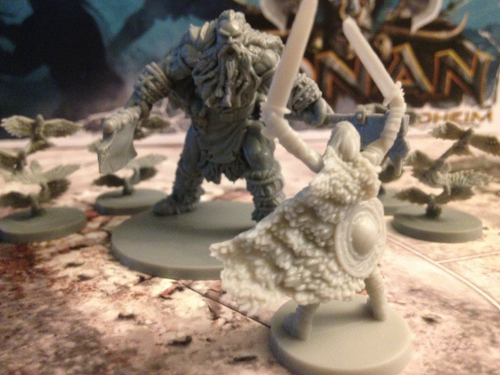 The only disappointment I have with this release is the inclusion of the wolves enemy tiles but no miniatures. You're stuck using the hyenas from the base game which feels slightly wrong. They do serve the purpose somewhat well and I can't argue with the fact that Conan owners need more minis like they need an axe in the head, but it still feels slightly off. In the end I can eat that small issue due to the excellence of the rest of the material.

If Nordheim is a proper glimpse into future Conan content then we're in for a treat. The quality of the entire package has met expectations and this game has cemented itself as a key member of the collection. Stygia and Khitai cannot get here soon enough as we've drank blood and are thirsty for more.