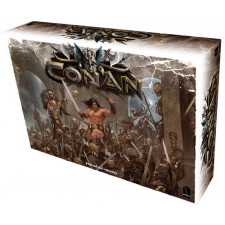 MB: Crom, this game. If I had to sum up the long-delayed Conan in one word, it would be â€œalmostâ€. This is a near-brilliant scenario-based skirmish design that has what I think is the best â€œoverlordâ€ system yet developed and it acquits itself excellently as a tabletop representation of Robert E. Howardâ€™s most famous character and setting. But itâ€™s saddled with a host of issues that, as it stands today, keep it from greatness.

DG: Conan is an amazing game with so much wasted potential. On the one hand, it provides a hugely entertaining miniature experience that is easily accessible to hobby and casual gamers. The system, while easy to learn, actually provides a lot of tactical depth. And it does a fantastic job of bringing the source material to life. But, while it provides tons of options for different characters and add-on content, it provides no system for incorporating it. No guidance at all. And with the game so heavily scenario dependent, thatâ€™s a huge problem.

CT: I expected this game to be solid, but I was particularly surprised how satisfying the gem energy system is. Itâ€™s cinematic and captures the pace and explosiveness of Robert E. Howardâ€™s fiction, nailing the feel perfectly. It also has one of the most innovative overlord systems out there with a really simple, obvious mechanism that boasts depth. I agree there are issues surrounding the game such as lack of modularity to scenarios and a rulebook that doesnâ€™t explain edge cases, but for all the minor quibbles this game just delivers every time it comes out to the table. Itâ€™s beautiful, engaging, and very satisfying. Iâ€™d rather own and play this game than 90% of the polished worry-free releases. 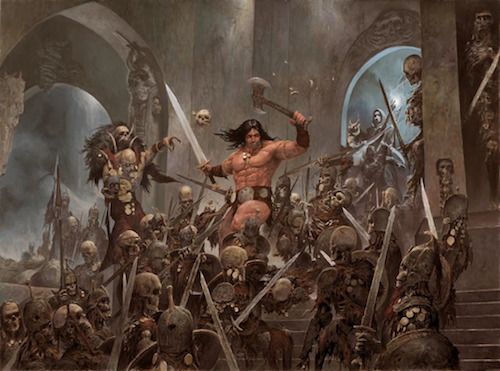 Note- game does not include skeletons.

MB: I totally agree that it delivers no doubt about it. And I am also of the mind that I'd rather play something exciting, innovative and cool over a meticulously balanced, extremely refined design. I like "risky" designs, I actually like when there's some roughness, some tentativeness. This kind of stuff can give games a wilder sense of life and heart. It's why I am a Stooges fan but not a Rush fan.

CT: Wait, not a Rush fan? How can we trust your rating for Conan in that light? MB: By not viewing it in the limelight, of course. Conan has that whole raggedy greatness thing going for sure, but it seems like every time I play it myself or someone at the table is left feeling like something is missing, something isn't firing quite right at some point, or we're going to the rules and trying to sort out something that's come up. If I had to sum up this game in a word, it would be "almost".

And that, in a sense, makes Conan a difficult game to appraise. It's "almost" enough to be great, but the fumbles are tough to reconcile. My heart wants to give this game five stars and declare it the ultimate expression of Conan on the tabletop. When I saw that one of the maps was two ships parked next to each other- which means that Conan is going to be swinging across and hacking through pirates, I thought "this is it, man". But it's all kind of like that movie you really want to love, but there's some places where the director made a bad choice or some elements of it weren't realized well.

DG: â€œAlmostâ€ is a great way to describe it. But itâ€™s not the actual gameplay that is â€œalmost.â€ That is amazing. Rules for climbing and leaping barriers or busting through walls deliver a highly cinematic experience. And, during every play, the gem system is a really cool, innovative way of forcing hard choices with a streamlined package. And it allows the players to have really huge, epic turns where they mow through enemies if they are willing to commit the resources. The â€œalmostâ€ comes in the implied promise of the game- tons of miniatures, a wide assortment of heroes, all kinds of equipment and spells. Clearly, the game was meant to mix-and-match and allow all kinds of customization. But Conan completely fails here. There isnâ€™t a point system or even any rules to guide the player. And within each scenario, changing one character can have a huge impact. One character might have spells or abilities that make a particular scenario too easy â€“ or far too difficult. The game promises you untold options, but delivers a game that is too tightly controlled.

CT: I think you nailed it Drew. But the degree to which that is a problem is a bit up in the air. I donâ€™t expect to be able to swap in different abilities or units when playing something like Space Hulk or Claustrophobia. Some of that perception is of course emplaced by experiencing the Kickstarter version of the game. 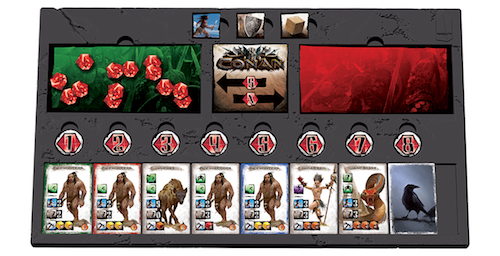 The Book of Skelos is a brilliant way for the "overlord" player to manage resources and activations.

MB: But the Space Hulk rules don't detail all of these cool abilities and concepts that aren't anywhere in the scenarios. The Conan rules leave you hanging. Hell, even the box leaves you hanging - where are all of the skeletons? I opened the box and wanted to see skeletons. I got Picts and Pirates. And then you find out that there's all of this Kickstarter stuff that you don't have access to that may or may not fulfill the promises of the game.

More to your point, I get where you are coming from about the scenario design. Play it as it is written and you are mostly OK. But it's not so much that I want to fuss around with the proscribed setup or anything, it's that there is often fragility built into what is there. I've played the first scenario, for example, where it was literally a 20 minute cakewalk for the heroes because of how it was set up and what the players did. But then I've seen it completely crush the heroes too. So when I think of the scenarios as being somewhat frail, it's more because of the balance- which is not something I usually complain about. But I'm actually willing to roll with it, for the most part, because this is a good game even if I'm just slumming with the retail version.

CT: In terms of the retail release, I think the game mostly delivers what it promises. I think the rulebook is extraordinarily vague about important elements, but when you sort them out and get in the groove, the gameplay comes through and the fun is there. Oh itâ€™s there.

That cinematic element you speak of Drew, thatâ€™s why I love this game and Iâ€™m hanging onto it despite its flaws. Thatâ€™s where its charm lies and what it does so differently than something like Imperial Assault. As an aside, this system would make for an exceptional Star Wars skirmish.

MB: I say that about just about every skirmish game I play- that it would be a better Star Wars game than Imperial Assault. That is also a good point about this game feeling very different than most games in its class- it isn't quite like most dungeoncrawls or guys on a grid games. It feels more organically narrative and more robust in terms of mechanics.

DG: Yâ€™know, I havenâ€™t really experienced the fragility when playing the scenarios-as-written. Deviate, and you never know what youâ€™ll get. But each play has been a down-to-the-wire experience. The heroes desperately trying to find the princess before time run out. Or Thokk the Man-Ape shows up just as Conan attempts to escape. Itâ€™s crazy fun. And every play is just so memorable. Somehow the bits of plastic and cardboard tokens reliably produce an amazing time.

And, to be honest, I have a bunch of the Kickstarter stuff but havenâ€™t even touched it yet. Iâ€™ve been enjoying the retail version and the gameplay is all there. So if you donâ€™t have the exclusives, I really donâ€™t think youâ€™re missing out on anything. At all.

MB:But if you really like the game, you are missing out on things you'd want. Like skeletons!

DG: My biggest hope is that Monolith creates a guide to swapping heroes/items/spells so you can tailor your experience a bit better. That would give a lot of life to the scenarios already included in the game. But, if not, Iâ€™ll settle for a steady stream of official and fan-made scenarios. If that issue can be addressed, then Conan may very well be THE skirmish game.

MB: What it really needs to do is to shift a little more towards a miniatures skirmish and away from more board game-oriented expectations. And by that I mean it needs something like a point-based value or budgeting system to make all of that stuff more useful and modular. So you'd buy loadouts of gear, skills, activation cards and so forth. Of course, at that point you are talking about a tremendous undertaking in terms of playtesting, balancing and fine tuning to get it right- which is probably why Monolith didn't do it, since the game was already way late. 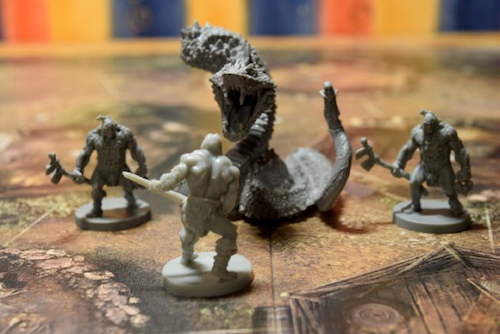 The miniatures are a mixed bag- some are decent, some not so much.

CT: I think what weâ€™re all driving towards is that thereâ€™s a great game buried here, but itâ€™s not floating at the surface and you must work towards it to some degree. There are stumbling blocks you may encounter and at times it may seem a little wonky. It really depends on if you can handle the lows with the highs.

MB: Well, getting back to my previous comment, I find myself wishing that it were more of a miniatures game with models up to standard in that field instead of the junky PVC in the box that I have no desire to paint. What Conan needs most- since it is exactly as you state, that it requires some work to get to the good stuff- is to embrace being a HOBBY game. It could totally benefit from sourcebooks, campaign books, and things like that. It could support a full product line, and not just expansions. I think trying to cram all of what they want to do in this really quite ambitious game into a board gamer-friendly package kind of hurts it overall. Compare to Earth Reborn, where Christophe Boelinger DID go more in that direction, and the result is a cleaner but more elaborate package.

DG: First, Earth Reborn is amazing. But more importantly, I think we need to bring the complaints into perspective. For me, the bad is that Conan gives you far too much fun stuff and no way to easily incorporate it. It is literally too much of a good thing. The game itself, when played with the current scenarios, might actually be the best board game skirmisher out there. It reminds me a lot of Claustrophobia. You get an extremely interesting system, the broad strokes of which can be easily learned, and yet a fantastic depth of play. All in a package that takes only about an hour.

For me, itâ€™s the promise of customization thatâ€™s disappointing. But on the table it delivers.