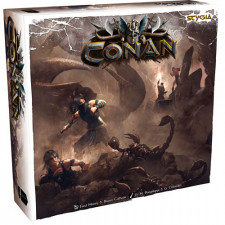 Asking someone if they want more Conan is like asking if they want another slice of pizza. After the success of the Nordheim expansion I was salivating for more content. That's not to say we actually need more, but by Crom, we want more. After fielding that Scorpion Broodmother, who can blame us?

Like the previous expansion, Stygia contains a new hero and four new scenarios. Ikhmet is one of the most interesting protagonists thus far in that he has a lowly yellow die for attack, yet he possesses multiple re-rolls while duel-wielding daggers. He's also able to precision strike which lowers the defense value of his target. This combination is an interesting dynamic absent from any hero we've previously seen. It utilizes dice with low odds needing few successes which stands opposite to the pre-existing approach. This turns the value of expending gems for re-rolls slightly on its head and broadens your view for the tactical theater.

Ikhmet is also a boss at manipulating objects/locks/puzzles. This is nearly as precious as water in Stygia; all four expansions are littered with tests in order to search the darkness and manipulate contraptions in the catacombs.

What's also uniquely interesting about this collection of tactical battles is the narrative. The story begins with our intrepid hero, Conan the Cimmerian, nowhere to be found. While that sounds dubious, it's in fact the point as the group begins the dangerous journey looking for the captured barbarian. This leads to bug infested cellars, guarded secret passages, and confrontations with assassins lurking the dark. Let me tell you, those assassins punch like hellacious lions.

If this system does one thing right, it's nailing that sense of adventure. Stygia continues to carry the torch.

The main new mechanism presented is that of poison. While individual scorpions are little threat, their small puncture wounds add up. Instead of typical damage you receive poison tokens which the target places on their character sheet movement or attack box. These lower the exertion limit of each, meaning the maximum amount of gems you can assign dwindles over time. If both boxes receive an amount of poison equal to the beginning exertion limit then the hero passes away, bloated and eyes-wide in the dry tunnels of Stygia. It could be worse, after you eventually pull off the rescue just ask Conan what those twisted sorcerers did to him; it involves a prickly lotus, a rusty hook, and soft tender areas. 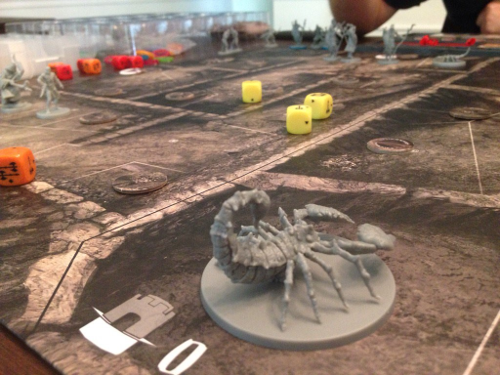 Donâ€™t go into the basement.

All of the scenarios presented are quite strong; however, my favorite has to be The Fifth Plague of Stygia. This utilizes a new board as well as the boat map from the core set making for an interesting visual continuity. This endeavor feels very unique as the heroes must deal with multiple fires and allows for a great deal of tactical maneuvering. The tension is great and it highlights the strongest assets of the system as well as the flexibility. It's simply a treat and an experience you will want to share.

One limitation you will want to be aware of is that all of the offerings here are confined to 4-5 players. The lack of three or two player native support could possibly be disappointing. With that being said, Iâ€™ve had no problem fielding three heroes as the protagonist and dolloping on the life lessons to my overlord opponent. With every slice of the blade or kick to the gut, the notion those henchmen should have stayed in school is cemented.

No matter the moment to moment joy of this system I keep coming back to a larger picture when burning the brain calories on the two existing Conan expansions. Most extensions tend to hit you with an avalanche of junk. Much of it is typically solid, but there's also a fair amount of offal to wade through. The bloat tends to overshadow the increased joy which can form an anchor on the game. Conan doesn't do this. Conan takes the anchor and throws it port-side at the undead ship attempting to board.

The best word to describe these expansions is svelte. They come with some new miniatures, a board, and a small scenario book. You don't need to prep anything to dive in. You don't need to argue about which modules we're going to use or how content will combine. You just pick a scenario and toss it out on the dining room table. In moments you're hurling torches at piles of those stinging arachnids and lopping off heads with a hefty axe. It's all about action as opposed to barriers which ensures those moments of excellence shine through. Nordheim does this. Stygia does this. If I was a betting man I'd be throwing down serious coin on Khitai doing this.