I was very excited to get my hands on the first two retail-release expansion boxes for Monolith's Conan, a game that landed from a much-delayed Kickstarter in a shockingly sloppy, tentative state. There is greatness in it, I'm sure. One of the problems holding it back is that there is too much missing from its quite expensive core release, due in part to parceling out tons of content for backer bonuses. So the first two packs out of the gate following the game's general release last year are Yogah of Yag, a new hero, and a set of ten Bossonian Crossbowmen. I was looking forward to seeing how these new figures would change the game by tapping into the variety and depth of narrative that it promises.

But then I opened the Yogah of Yag box and I uttered out loud "you have got to be kidding me". 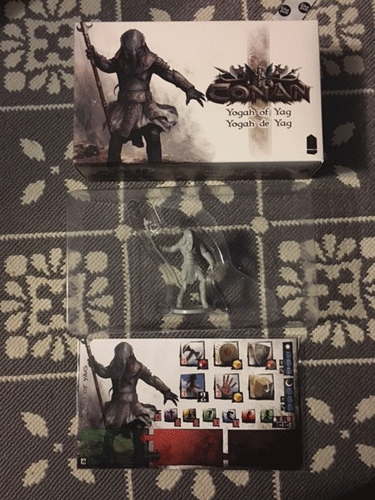 Not pictured - my look of incredulity.

For $25 retail ($20 here at Miniature Market), you get one rather crude miniature with muddy detail and a character card sitting in a plastic tray that could hold at least two more of the same figure. If you are lucky (?), Yogah's staff will also be a special "warped" variant. Or it could just be plain old bent, cheap plastic. I suppose the air in the box was complementary.

As for the value of the figure- well, it's up to you! There are no scenarios, guidelines or any other ephemera provided to give you an idea of how to put Yogah into existing scenarios. He can use spells, but comes with none. His stats and abilities are pretty much just a mix of what is already in the game, but since he's a giant elephant dude he has a greater weight threshold. He can attack with up to five dice, but he's slow. No surprises. I've used Yogah in a couple of scenarios (including the great one where you have to interrogate priests in an inn), but I've been pretty much unimpressed with what this figure has to offer. If this character, which does come straight from the Howard texts, had some scenarios or a storyline adventure then the price might be justified. But for what you get this is, to put it bluntly, almost a rip-off.

The Crossbowmen fare somewhat better in my critical eyes but it's all still a total bust. It's a set of ten enemy figures for Overlord use, and as you might expect they have the Elite Shooter ability and offer a pretty powerful ranged option. But they also aren't all that much different than the Bossonian Archers in the core box, and I don't think most players would notice if these figures ever existed. They aren't even nice miniatures- all one sculpt, all with the same crude level of detail that plagues the entire range of Conan figures to date. You get the necessary tiles for the Overlord's Book of Skelos to activate them, but once again no scenarios, guidelines or any other indication as to how you would add these into a game other than "however you see fit". 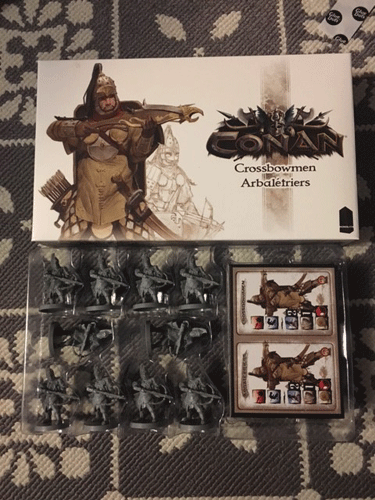 Here's the deal. When Fantasy Flight's Imperial Assault came out, I criticized it pretty heavily for selling a base game and then nickel and diming the consumer for those Villain and Ally packs. But each one of those packs- which sells for $10-$15 less than either of these Conan sets- acts as a mini-expansion in addition to giving you a figure or three. You get cards for the campaign game, cards for the skirmish game and also a couple of scenarios in each one. With these, you literally get nothing but the miniatures and the absolute barest minimum required to play with them. Actually, that's not even true. You don't get any kind of rules or structure.

What's more, since we are looking at comparables, these figures at their price point versus what is coming from a leading miniatures game company (the one with the Nottingham HQ) represent a complete disconnect with market norms. A $25 model from a proper miniatures game is generally going to be very well sculpted, it will offer the player a modeling and painting opportunity, and will usually offer value in games where bespoke collections form a player's range of options.

But that is not the case here. In our triple-header review of Conan here at the Review Corner, I noted that Conan should have just been a full-on, a la carte miniatures game and not a board game. This packaging model indicates that Monolith may have thought so too, but without any market sense about how to properly price or present these figures. If these pieces were part of a $50-$60 boxed expansion with scenarios designed with these miniatures in mind and with rules indicating how to incorporate them into the larger game, I would be more inclined to overlook the poor component quality and focus on the additional content. There's not any content here, just pointless add-ons that many who were looking forward to more from this line will rush out to buy. I think there's going to be a lot of disappointment from those that go in for these, but hopefully prudence will drive Conan fans to wait for something more substantial and reasonably priced than these absolutely inessential expansions.