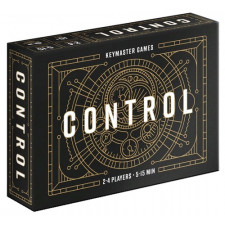 Control is a quick-playing and easily portable card game that was released last year by a small independent publisher. It's simple but elegant graphic design and somewhat pasted-on theme have caused it to fly under most gamersâ€™ radars, but I consider this filler game to be a hidden gem among the numerous card games that include multiple uses of each card as their primary mechanic.

The goal and end game condition of Control is simple: be the first player to play 21 points of cards in front of you from a deck of 54 cards numbered from 1 to 10. A handy reference card shows you the name, type, and value of each card youâ€™ll find in the deck, how many of each there are, and includes a very simple list of all the actions you can take during your turn. This reference card is a brilliant and useful addition to the game; after reading the 8-page rulebook a single time to learn what â€œinstallâ€, â€œburnâ€, and â€œdefuseâ€ mean youâ€™ll almost never open it again.

In order to reach 21 points youâ€™ll take one action from a list of four each turn: draw a card, install, burn, or defuse a fuel cell. These are thematic terms intended to evoke the idea of players racing to power and launch a time machineâ€”a theme that doesnâ€™t come through any better than if players were rival countries trying to be the first to launch moon rockets or enemy armies racing to launch missiles at each other. Frankly, the choice of time travel as a theme for this game makes much less sense than the off-the-cuff comparisons I just made. 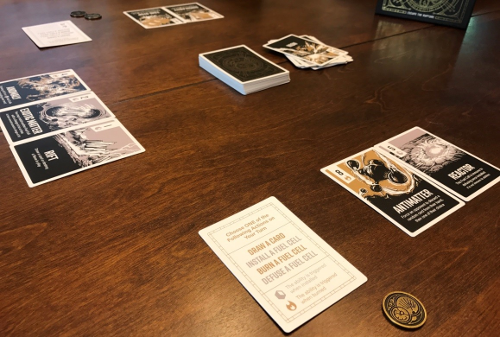 Cards come in two types, silver and bronze. Bronze â€œfuel cellsâ€, the gameâ€™s term for all cards, have abilities that players will actively use to further their own progress or to foil other players by using an action to Burn them without gaining their numerical value. Alternately you can Install a card, playing it in front of you for its numerical value. In this case bronze card special abilities do not trigger, but silver cards do. Finally you can Defuse an opponentâ€™s fuel cell of your choice by playing any card of equal or greater value on top of it.

Not quite a â€œtake thatâ€ game, Control is a balance of weighing whether to use some cards for their more powerful abilities against installing their higher numerical values. While burning or defusing cards to set your opponents back a step or two is a viable strategy on some turns, this tactic also prevents progress for the player throwing the proverbial monkey wrench into their rivalsâ€™ plans. While easy to learn and fast to play, this is a filler game that engages players and keeps their attentionâ€”requiring vigilance lest your opponent drop a sudden 10-value card on their seemingly mid-range, low-value stack of fuel and win the game!

In my own experience three players is the optimal number of players for Control; two players doesnâ€™t allow any breathing room or opportunities to slip a sneaky or clever move past your opponent since youâ€™re always being scrutinized and watched with undivided attention, and with four players it becomes a two vs. two team game. A four-player free-for-all is possible, but the game drags on a bit too long and usually ends with an unsatisfying sudden death finish.

Itâ€™s important not to invest too much into the time travel theme tucked into the mini-comic and game overview on Controlâ€™s first two rulebook pages. Itâ€™s just not there. Despite a theme that falls flat and a pretty tight fit on player count, however, this is a card game with very solid gameplay that will keep it coming to my table as a filler staple. Itâ€™s obvious that more time and development and was put into thoughtful play and strategic decisions than on playing up fiction elementsâ€”and ultimately, for this game at least, thatâ€™s okay! How much immersion and story does one need in a 5-15 minute card game, after all?