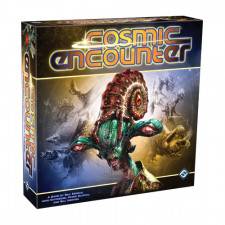 (Editorâ€™s Note- Hello readers- Michael Barnes, Editor in Chief here. I just wanted to issue a disclaimer about this review. If Nate had submitted it with less than five stars, I would have rejected it. Because we here at the Review Corner believe in truthful, honest ratings. And Cosmic Encounter is the best game ever published. It is not my opinion. It is just the truth. So please enjoy this great review, Nate got it right!)

The basic structure is straightforward. Every player has five planets with four ships each, and to win you need to create five colonies on the other playersâ€™ planets. On your turn you draw a card to see whom you will encounter. That means you point the hyperspace gate at their planet and launch some ships. Each side then gets the opportunity to invite the other players to send more ships to join their side. These allies will receive a reward for their help if their side wins the encounter, so the alliance phase is where a lot of the interaction takes place. Each side then secretly picks a card from their hand, typically an attack card that adds to the total number of ships your side. The higher total wins the encounter, sending the losers to the warp where they will wait to be freed. If the offense wins, they and their allies get to place a colony on the vanquished planet. If the defense wins, their allies get cards or ships out of the warp.

Itâ€™s tempting to think of encounters as being an attack, and this is often true functionally, but itâ€™s not necessarily the case. Many of the cards are actually negotiate cards. These lose when they are opposed by an attack, but when opposed by another negotiate the two sides cease their conflict and instead have one minute to hash out an agreement without any fighting. Iâ€™ve read many descriptions that describe Cosmic Encounter as a conflict game. Others describe it as a negotiation game. Both descriptions are somewhat accurate. But they are both incomplete as well, partially because they donâ€™t cover the scope of how the game plays and partially because they make it sound more serious than it actually is. It might be better to describe it as an â€œinteraction game,â€ since interaction is one of the iron-clad elements from which the design never wavers.

The other element that makes a lot of hobbyists uncomfortable is its sheer, unbalanced and possibly insane variety. Nothing exemplifies this like the alien races. The players are each given a specific race that gives them a specific mechanic that only they can use. Much has been written on how impactful this has been on game design, and that is all true. But no game has ever embraced player powers to the extent Cosmic Encounter did. In the current edition there are nearly 200 powers, and they range from the mild to insanely powerful. The volatility between player actions and abilities makes the game feel dangerously unstable, though the actual number of trainwreck sessions tends to be surprisingly small. Many hobbyists seem committed to making Cosmic Encounter a more sane experience by imposing more structure or banning specific aliens, and I applaud their efforts to make the game more to their liking. But the truth is that chaos and silliness is at the very core of Cosmic Encounter. Itâ€™s like playing stud poker filtered through an episode of Adventure Time.

The ludicrous atmosphere masks some of the brilliant design work. It was designed by a too-young-to-know-the-rules collective called Future Pastimes, who began with a series of goals that were quite revolutionary for their day. They wanted a short game without dice, and that allowed the players to stay involved throughout the whole experience without fear of elimination. In a refreshing move that still feels all too rare, they also strove to make a game that would appeal to women as much as men. You see these goals expressed in the emphasis on interaction over conflict. Players are allowed to negotiate instead of fight. The destiny deck makes it hard to pick on specific players. And for all its insanity, it still allows space for interesting decisions and smart play. The best thing I can say about Cosmic Encounter is that it emphasizes relationship over structure, like the designers intuitively knew thatâ€™s what gives most games meaning in the first place.

Cosmic Encounter has been a favorite since its original release, but the 2008 reprint from Fantasy Flight, fueled by a steady stream of good expansions, has finally pushed the game toward the popular success it always deserved. Part of this might be because the hobby is varied enough to support such a grand vision, but I think there is something generational at work here too. The emphasis on relationship and interaction makes Cosmic Encounter a particularly appealing game with younger Millenials, around high school and college age. Those are the people who will determine what gaming looks like in the future, and when I realize this game will continue to be a formative experience for years to come, it makes me happy. After nearly forty years, Cosmic Encounter is still pointing the way toward what board games could be.