I’m usually more impressed by a design that does more with less. Games are meant to be played, and rules often get in the way of play. The German school of design has been especially effective with this. But there’s always the danger of scaling things back too much, and the game can feel one-dimensional and empty. Costa Rica, the new game from Matthew Dunston and Brett J. Gilbert, treads dangerously close to that line. It manages to avoid crossing it, but only just. 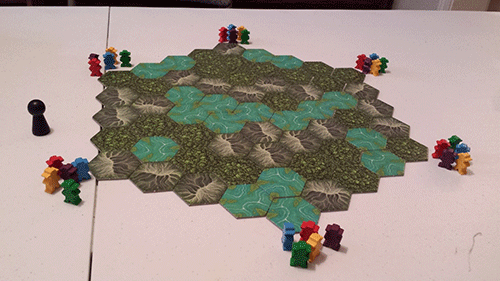 As jungle explorers seeking photos of rare animals, Costa Rica begins with six expeditions, each one containing an explorer from every player, though players will leave expeditions as the game goes on. When it’s your turn you pick one of the expeditions where you are present, and flip over an adjacent tile. This can be selected by the starting player, and if they turn it down, the choice proceeds clockwise. If everyone turns it down another adjacent tile is flipped, and players now have the choice to take all of the available tiles. When a player takes tiles, they remove their explorer from that expedition.

The idea here is to collect the pictures of animals on the other sides of the tiles. There are six different kinds, all tied to different kinds of terrain, and with various levels of rarities. You get points for having full sets of all six animals, along with multiples of individual animals. The snag is a good portion of the tiles also have dangerous mosquitos. If one mosquito shows up in the line of available tiles, that’s fine. But if a second appears it will force the first player to take everything, after throwing out the mosquito tiles, thereby losing their explorer in that expedition.

The most interesting part of Costa Rica is the tension of when you should take a set of tiles. There’s always the question of whether you should take a set just to deny it to someone else. Besides that the timing is crucial. There are a lot more available tiles early in the game, especially with more players, so it might not pay to wait for the perfect set that will never be forthcoming. There’s a little bit of fragility here, since inexperienced players will often let someone take a huge set, giving them a big lead. But those kinds of things iron out with experience. It reminds me of the tension in the classic auction game Ra; where you sometimes just need to take the low-hanging fruit to stay in the game and keep someone else from making a slam dunk. 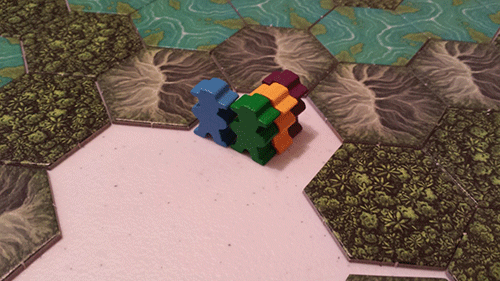 Unfortunately, the push-your-luck elements are where the game falls flat. It’s not that they don’t work mechanically. Quite the contrary, the game goes to great lengths to show you just how precisely you are pushing your luck. Every player has a full player aid with all of the distributions of the various animals and mosquitos by terrain type. The problem is that there really isn’t a lot of tension in what comes out. There just isn’t a very big penalty for two mosquitos showing up. You might end up with tiles you didn’t exactly need, but it’s always objectively better to have more tiles, since you get more points for having more of the same kind. Compare this to something like Incan Gold, the closest game to this “draw two of the bad things and bust” mechanic. In that game the bust hurts everybody who has stayed in, and even ends the round. Here it feels like a slap on the wrist, a non-consequence. There is a chance you’ll sacrifice an explorer without getting anything at all, but only if you’re the starting player, which means the other players really don’t have much of a stake in failure. It’s weird too, because in practice it ends up being pretty consequential in how the game shakes out. But the critical failure is that it doesn’t feel very risky. Instead it feels calculating and levelled-off.

And yet, even if the game doesn’t feel as dangerous as it could, there are some fun moments to be had here. It does capture some of the schadenfreude of watching someone else fail mightily. There’s also a nasty little mechanic where when the last tile adjacent to an expedition is removed by another expedition, the former expedition is removed from the board entirely. That’s a great bit of screwage, and it feeds really well into the tile collection. If you know that the expedition leader is gunning for one of your other expeditions, you might just take a lousy set of cards to prevent it from happening. And of course, the game’s simplicity means it can be trotted out with a wide variety of experience levels and ages, always a nice quality.

If the push-your-luck mechanic had more tension, this would be a gem of a game, simple and cutthroat. As it is it’s a bit more one-dimensional than that. The set collection and screwage feed into each other really well, but they have to do the heavy lifting. It’s kind of a minor game, but it’s not without its charm, and those looking for a light German-style game could do a lot worse.