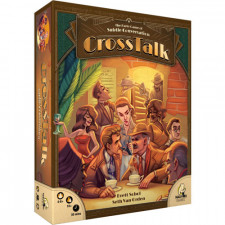 If youâ€™ve ever played the classic game Password (or even just watched the show), then CrossTalk will immediately feel familiar. The object of the game is to get your team to guess a secret word by giving them only one-word clues. However, CrossTalk isnâ€™t just rehashing the nostalgic TV game show. Itâ€™s taking the successful formula and creating something better.

A game of CrossTalk hinges on the private clues that the clue givers give their team at the beginning of each round. This is integral to everything that happens after, so take your time and put some thought into that perfect word. When the game starts, the first teamâ€™s clue giver will write down a clue on the public board. It seems easy enough to link your private clue (â€œfiveâ€) and public clue (â€œshapeâ€) for the clue â€œpentagonâ€, but hereâ€™s the catch: the other team gets to guess first. If you make your public clues too obvious, then the other team may easily guess correctly, gaining a point. The first team to five points wins, so you canâ€™t just throw words around all slapdash. Naturally, you want your public clues to make sense to your team, but you also donâ€™t want them to be so obvious that it gives away too much. CrossTalk is a game of subtle conversation after all. 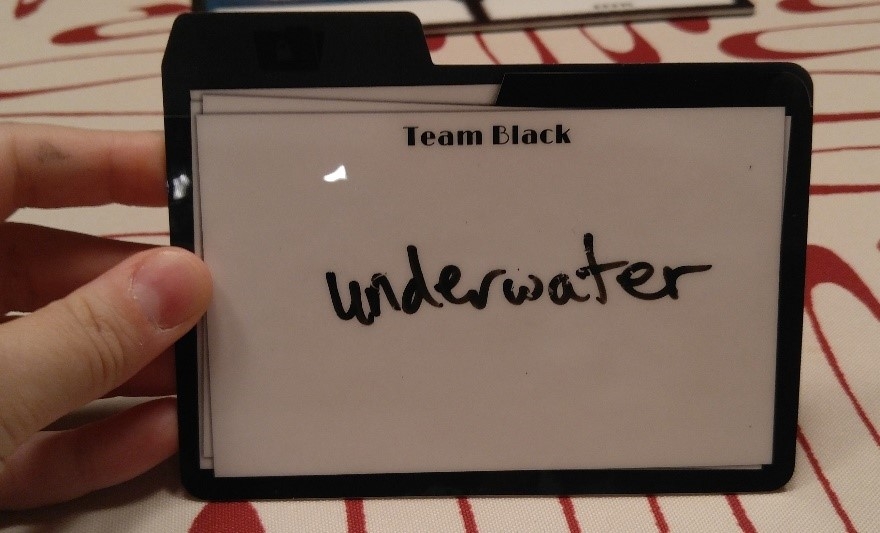 Itâ€™s all about that perfect private clue.

Not knowing the other teamâ€™s private clue makes it feel like youâ€™re stepping into a minefield when you write down that public clue. There are rounds that can end very quickly, even after one guess, because the private clue was so good and the public good was good enough. Other times, the round goes on through its five clues as teams struggle to figure out exactly how hotel, rabbit, and hunchback relate. (Turns out, itâ€™s a bell hop. Get it?) As the round progresses, you hope that the other teamâ€™s public clues will shine a light onto your own, however all this depends on how alike teams are thinking. Iâ€™ve seen the public clue board look so starkly different that the clue-guessers are wondering if theyâ€™re even trying to figure out the same word. Other times, the private clues are identical, leading the public clues to take the same word association path.

The answer is â€œseahorseâ€. Randomly recalling that males carry the babies made â€œfathersâ€ seem like a good clue at the time.

All of this makes for a fantastic game, but CrossTalk isnâ€™t done there. To add nuance to the tried and true give-a-clue/guess-a-word structure, CrossTalk allows you to clarify to your clues instead of getting pelted with confused stares. However, even this maintains subtly. Each team has a clue board that is usable once per round, but only after your team has guessed. This board provides a legend with symbols that you can use to steer your team toward the right answer, allowing them to ignore certain clues or focus on other ones. Accidentally put a clue out there that isnâ€™t as clever as you first thought? Cross it out with an â€œx". This tells your team to ignore it. Was the other team really close in their answer? Circle their third guess and hope your team remembers what it was. Timing the clue board is important, but it can be difficult to know exactly how long to wait out your teamâ€™s exasperation until you bust it out. You may not even need it in a round, but I also donâ€™t need my Mickey Mouse blanket, I keep it just in case, okay?! Oh, and if you really want your social deviant to shine, you can write public clues that throw off the other team then use the clue board to tell your team to disregard them. Not that I would do thatâ€¦ often.

Needed the clue board to tell me to ignore the first clue in order to answer â€œgrand pianoâ€.

As I mentioned above, a full game goes until one team scores five points. Sometimes those five points get racked up pretty quickly if teams are knocking out answers in the first clue or two. Admittedly, those rounds are not as fun as going a few clues deep, but that doesnâ€™t make it any less satisfying to come up with or figure out the link between the private and public clue instantly. For the most part though, games will clock in around the 30-minute mark, making it easy to call for â€œjust one moreâ€ a few times in a row. Like any party/word game, itâ€™s best when you are comfortable with the people youâ€™re playing with. I would love to give you an example from one of our games, but itâ€™s not exactly family-friendly. Suffice it to say that a lewd private clue was given and the hilarity that ensued from the public ones was enough to cement it as one of my top gaming memories.

For those who are thinking weâ€™ve seen this Goldilocks-esque â€œnot too obvious, not too vagueâ€ idea and give-a-clue/guess-a-word structure many times before, youâ€™re right. Somehow though, CrossTalk embraces its roots without feeling stale. It may not reinvent the wheel, but it certainly makes things roll a lot smoother.