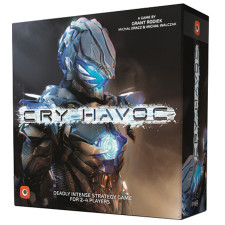 CT: Cry Havoc was the darling of Gen Con. It sold out before the doors even opened. Grabbing a demo was even tough as head designer Grant Rodiek was running at full speed shuffling people in and out all day.

This is a dudes on a map game that can be roughly compared to Blood Rage or Nexus Ops. Itâ€™s really a rather unique release for Portal Games, hitting us with a big box of Ameritrash plastic. I have to say, from my very first play, this one delivered on the hype and sucked me into its little world of rage and conquest.

RC: I totally agree. It's described as an asymmetric card driven area control war game, which is a lot of words to use when they could have just described it as awesome. From the fast paced turn structure to the excellent area-majority-within-area-control combat system, it hooked me quickly and has me dying to keep playing. 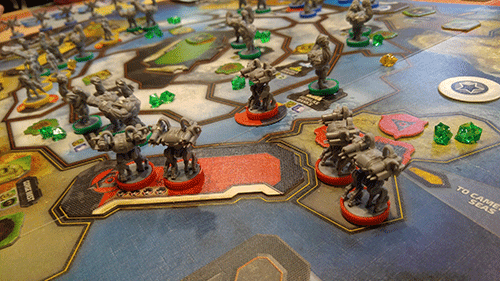 Come out to the coast, we'll get together, have a few laughs...

GP: As the token Euro fan here, itâ€™s probably a bit odd Iâ€™m even part of this discussion. Plastic dudes and space fights isnâ€™t my typical kind of game, but I have a soft spot for Portal and I couldnâ€™t ignore this massive release. I admit that I have some Ameritrashy guilty pleasures (one of which is the aforementioned Blood Rage), so I had hopes Cry Havoc would kick me in my wooden-cube-loving pants. To top this off, the game has a deck-building element with the multi-use cards, which are two things that will always tug at my gaming heart strings.

RC: Well? Does it? Iâ€™ve heard people call Cry Havoc a hybrid but if pressed, Iâ€™d have to say it hides any Euro elements really well.

GP: The game is definitely an Ameritrash sundae with Euro sprinkles. Something like Blood Rage could be abstracted into cubes and a Mediterranean setting, but Cry Havoc spurns any such notion. Even though Cry Havoc clearly acknowledges that dice arenâ€™t always the most satisfying way to resolve combat, that isnâ€™t what makes it slightly Euro-y. In fact, itâ€™s hard to pinpoint exactly what about Cry Havoc has Eurogame elements. Perhaps this is the best refinement of a hybrid in that you donâ€™t know where one game style ends and the other begins. As huge hybrid and Ameritrash fans, how does Cry Havoc feel to you?

RC: I think youâ€™ve got it right. The two styles blend together in a system that is both dramatic and calculating. Thereâ€™s a build up to all the factions that rewards efficiency and tactics, yet the combat and light deckbuilding aspect inject a little bit of uncertainty. Nothing feels better than throwing down one of those â€œReverse Combat Resolutionâ€ cards and seeing your opponentâ€™s plans fall apart.

CT: The deckbuilding/action system is fine, but that combat resolution is where itâ€™s at. Dedicating units to separate positional outcomes and attempting to outwit your opponent is fantastic. Itâ€™s engaging without relying heavily on a dice or card based resolution system, which is commendable.

I like how it does utilize cards as an optional asset to add a bit of intrigue and suspense too. Couple that with the high stakes of grabbing prisoners or controlling the territory and it all comes together so well.

GP: I agree; you canâ€™t deny that the game is well designed. I would argue that the battle resolution is the most fun part of the game. Unfortunately, for the gamers less okay with conflict, I think the game as a whole isnâ€™t going to work. There is small scooping of points salad in how you earn VP, but the game is ultimately about building your forces and stomping into other peopleâ€™s regions. This is a feeling that many Eurogamers, myself included, shy away from: you built something and put work into it, but then it gets taken away, potentially without being able to recover it or rebuilt elsewhere. With 5 (or less) very short rounds, this is tough to swallow.

RC: I haven't gotten that feeling as much. Having to fight through Trogs and only spawn new recruits at home has limited the amount of direct player conflict we've seen. It's there for sure, but the low number of rounds means there can only be so much. We typically only see 4 rounds; usually at least one person shoots ahead to shorten the game.

GP: We saw 5 rounds in all the games I played, but regardless of how long a game lasts, it is still designed around getting into one anotherâ€™s territories. I felt most at home with the Pilgrims, burrowed in a corner and generating VP while the others were out fighting each other and invading the Trogs (either someone actually playing them or via the arguably best dummy player system ever).

CT: Yeah itâ€™s interesting, and perhaps disappointing, that the game seems to want to encourage conflict at every turn but it doesnâ€™t funnel players towards the middle like Eclipse or Blood Rage. This gives you more options and vectors to approach, but Iâ€™ve also seen games where someone spent most of it mired down in a corner fighting wave after waves of Trogs.

Donâ€™t get me wrong, that can be enjoyable, but the best moments of Cry Havoc are when youâ€™re butting heads and swapping dirt. That makes it decidedly not a game for a low conflict type of gamer.

RC: I think the relatively short nature of the game can exacerbate that. You have, at most, 15 actions with which to recruit, build, move, activate, and otherwise attempt to colonize the planet. That doesnâ€™t leave a lot of room to regroup and charge back. The arc to whatever narrative the game engenders is more like a straight upward slope leading into a brick wall that is the end. While I do think Cry Havoc is one of the best games of an excellent 2016 (so far), I have a few complaints that keep this from being an all timer. One of them is the ending. All that lore, story, fluff, and gameplay of disparate factions slamming into each other and it ends with the whimper of VP counting. I want to see the scope of our conflict writ large on the board and instead I just have a point differential that doesnâ€™t necessarily reflect the drama on the board.

GP: Aside from a few tense moments where I consider what order to recruit more guys, activate a structure, or enable scoring, Iâ€™m not sure the game has much drama, or even an arc. I wanted so much to like this because itâ€™s so well produced and cool looking. In the end, I donâ€™t think this is the dudes-on-a-map game thatâ€™s going to change my mind and turn me from my misery farm inclinations. Itâ€™s a shame because I think thereâ€™s a lot to explore in the game, especially given the asymmetric factions. It will take many games to get a firm grasp on how to play each well and explore all the dynamics therein.

CT: The drama is mainly found in that combat system and those tense moments of choosing how to spend your few actions. As Raf points out, the game is short and you canâ€™t afford to mess around or dip a toe in, you have to cannonball the damn thing and hit your opponents where it hurts.

That can definitely be seen as a negative but the other side of the coin is that the thing plays very fast. Itâ€™s difficult to find games that feel substantial and meaty with a quick playtime. Couple that with the asymmetry and depth of strategic area to explore and this game really does come through looking fantastic, able to overcome those shortcomings.

RC: Absolutely. That speed is a big asset, and I like how aggressive players can push the pace of the game. It can feel brutal and I know many people donâ€™t like the lack of a true catch up mechanic, but the fact that Cry Havoc eschews that in favor of accelerating the game with aggressive tempo control. Man... itâ€™s fierce. The only other game that comes close to this pit fight cadence is Kemet. Thatâ€™s high praise coming from me.

GP: Despite my more lukewarm reception of the game, I agree with what Raf and Charlie have said. Iâ€™m sure the game will deliver those exciting experiences for players that enjoy getting up in each otherâ€™s faces and duking it out like Rockâ€™em Sockâ€™em Robots. For us more city-building, tile-laying, resource collecting fans, this wasnâ€™t made for us (and I think both the designers and publisher were clear on that).

CT: Rockâ€™em Sockâ€™em is my MO. Iâ€™m not quite sure if this is game of the year material, but itâ€™s certainly in the conversation. For those of us at home on the battlefield and shoving guns into our neighbors faces, hit up Cry Havoc and conquer and kill like a machine.