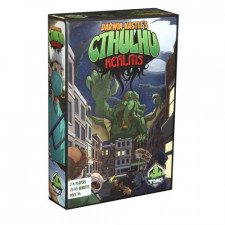 Innovation is not always for the better. Last year's Star Realms, co-designed by Magic Hall-of-Famers Robert Dougherty and Darwin Kastle, didn't do anything surprising for a deck-building game; in fact, there's almost nothing in the game that wasn't already present in Ascension: Chronicle of the Godslayer in 2010. Rather than reinvent the genre, the designers focused on making an affordable, travel-sized game that would be internally balanced enough to replay over and over without the need to buy an expansion. And they succeeded, creating a mirror-polished hit that sold out almost immediately.

With Cthulhu Realms, Darwin Kastle's gone solo in an attempt to reinvent the wheel with what the rulebook admits is "a jagged and hectic misremembering of a game." Considering the title, it shouldn't be surprising that Cthulhu Realms deviates only slightly from last year's hit, the most apparent changes being a new publisher (Tasty Minstrel Games) and completely different visual design. Yet this is more than just Star Realms wearing a Great Old One costume To go with the new Lovecraftian theme, Cthulhu Realms introduces some sanity-destroying new mechanics that stress synergy, card chaining, deck culling, and Cthulhu-sized effects, leading to a crunchier but less elegant take on the game.

Visually, there's a lot to love and a lot to hate. Unlike Star Realms' sleek spaceships and blend of text and iconography, Cthulhu Realms is 100% language-independent, leaving extra space on the cards for the goofy art (in the style of other TMG games like Belfort and Harbour). The iconography isn't totally intuitiveâ€”your first play will feel like deciphering Pnakotic manuscriptsâ€”but once you've learned how the 5-or-so abilities work, that won't be a problem any more. The artwork, on the other hand, is top-notch stuff. Rather than a straightforward take on Lovecraft's mythos, TMG went for in-jokes and visual punsâ€”the Yellow Sign is a literal yellow caution sign of the "Slippery When Wet" variety, and Cthulhu is illustrated like a cartoon supervillain.

Sanity is the name of the game in Cthulhu Realms. Like SR's Authority, sanity is a player's health, and the goal is to drive everybody else's down to 0. However, you'll need to balance attack cards with ones that give you Conjuring Power, used to purchase new cards from the rotating offer and beef up your deck. You'll also want to get rid of your weak starting cards; luckily, many cards (especially green) have the "Abjure" ability, which removes from play any card in your hand, discard pile, or the central offer. Some cards are even capable of self-Abjuring for a small bonus.

One good reason to take advantage of such powers is to make use of Cthulhu Realms' plentiful card synergies. Nearly every card in Cthulhu Realms has some sort of triggered ability that is only accessible if you've met certain prerequisites. Some require a card of a specific color or type (character, location or artifact) in play, while others are triggered by specific actions such as whether a card has been Abjured or discarded this turn.

Most cards have several such abilities with different triggers. This gives Cthulhu Realms a very different flavor from Star Realms, which featured only faction-based triggers and a maximum of one per card. In an appropriate nod to the arcane rituals and cosmic alignments of Lovecraft's fiction, Cthulhu Realms focuses its deck-building on figuring out how to play the cards off of each other so that you can squeeze every drop of usefulness out of them. Having one fewer faction color and more opportunities to thin your deck accelerates this process, so that you'll be creating absurdly long ability chains well before the game ends.

The abilities themselves also feel bigger. Attacking an opponent for 12 brain damage in a single turn, after destroying all their buildings, is commonplace, but so is recovering 12 sanity. This has a tendency to lead to long, swingy matches that feel like stalemates. Even with the limited pool of abilities, there are some neat additions, such as the chance to call up any card you've Abjured this turn and put it on the top of your deck. (Lovecraft fans will be pleased to see that these abilities have been assigned to thematically appropriate characters like Old Whateley and Keziah Mason.)

It's differentiated enough to justify owning both, but personally, I'll still pull out Star Realms every time. Cthulhu Realms reminds me of some of the later Ascension expansions, full of individually exciting cards that, when combined, take card chaining to tedious heights. Putting together these combos is a lot more fun than playing them out.