MB: In the last Head to Head that Charlie and I did, we looked at a few of the Cthulhu Wars faction expansions and we both came out with a big ol' Shoggoth-eating grin on our faces. They are awesome, and they all add quite a lot the game. I would go so far as to state that the various combinations of factions, abilities, monsters, agendas, and player agency make it one of the most variable and compelling games on the market today. This time out, we're going to take a look at two other expansion options, new maps and cross-faction add-ons. As far as the maps go, I chose Yuggoth because, well, I really like Yuggoth, alright? Charlie went with Primeval Earth for nefarious reasons that perhaps only he can fathom.

CT: Primeval Earth spoke to me because I actually had a chance to try Dreamlands and Yuggoth previously. This map, however, is somewhat of a different experience as it's much more streamlined than those two. As opposed to tossing in neutral units and new sub-systems to worry about, it's pretty damn simple.

You basically have glaciers popping up around the map slowly over time, co-opting gates and locking them down as neutral entities. These icebergs only appear on specifically marked spaces. What this does is incentivize the push towards safe regions on the board, funneling traffic and carnage to a central hub. It really feels somewhat similar to the Yggdrasil space in Blood Rage as it shoves everyone into a blender and has you bashing heads and tentacles quite early.

There's also a tempo change that significantly alters the experience from the core Earth map. Because you tend to have several neutral gates that no one can occupy, the entire group ends up with higher levels of power relatively early in the game's lifecycle. This allows a different strategic approach and for you to possibly pull in more neutral monsters and Great Old Ones if you're going that route. It's definitely intriguing. 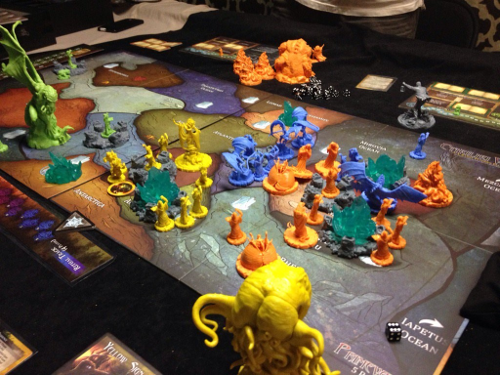 The scene on Primeval Earth- complete with frozen gates.

MB: That definitely sounds different than Yuggoth, which doesn't really affect the tempo, power levels, or overall aggression. Instead, it gives you a couple of totally new things to play with. It does increase the game's complexity slightly, but not uncomfortably.

One is a special laboratory space- control it, and you can conduct surgery to turn Acolytes into Brains-in-a-Jar which act like Acolytes but can't move of their own volition. There is a Slime Sea, if you control the overlook space you can send out 2-combat Slimes to do your bidding. And there is the Green Pyramid. Gates built on it generate extra power, but you might awaken the Watcher, a super powerful monster everyone controls in turn to wreck everybody's stuff.

I love this map. The additions are a little crazy and they can really roll up into some incredible combos- like using Shub-Niggurath's Frenzy to give 1 combat to your brains, which also effectively double your Acolytes. It can be a brutal time on Yuggoth though- that Watcher can just decimate a player unprepared for the onslaught. It can throw the balance of the game out of whack but that's the price you pay for more volatility. 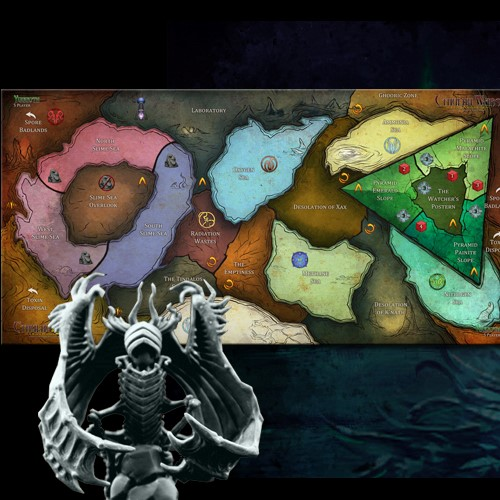 The Yuggoth Map and the Watcher. Don't mess with his Pyramid.

CT: It's definitely a more wild and unhinged experience with the expansion maps. It seems as though Earth, the base setup, is carefully measured to keep everyone in striking distance to bleed the most out of each power and upgrade. Conflict is always at hand but it's direct. Strategically you're worried about setting up gates, boxing your enemies out, and hoarding those spellbooks. With these new maps, you have to re-evaluate your approach and even relearn basic strategy at times. Ignoring those key differences can cost you the game.

MB: Agreed- and to that end, I feel like these maps are definitely better for the experienced player because you really need to understand the impact of how they shake things up in the mix with various faction spellbooks and abilities. One thing I will add about Yuggoth versus Primeval Earth is that with more things to mess around with, you might find that conflict is sometimes less direct- and you will undoubtedly find yourself with tough decisions over whether to take advantage of the new features or stick to tried and true through-lines.

Now, with that said, let's talk about the other add-ons we picked to look at. You went with one of the lowest cost, "budget" expansion options, the High Priests. I've heard that this is actually one of the best buys in the range- what is the Theel thought on that? 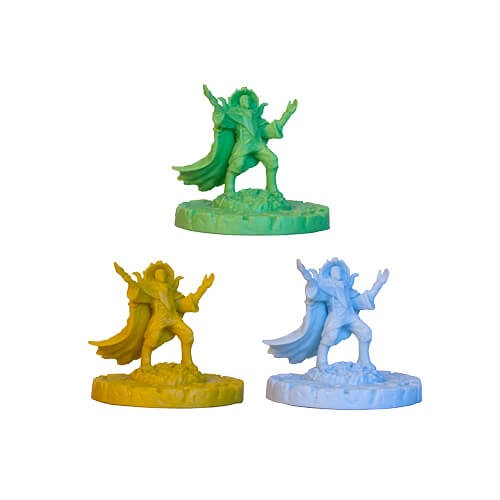 Ready to rock n' roll all night and party ever-ee-day.

CT: Oh yeah. I'd go so far as to say that this is a mandatory buy for fans of the game who want something beyond the base game. They slot in very easily with only a modicum of additional rules overhead, while providing a substantial benefit that outweighs their real-world cost.

Each faction (including expansions) receives a High Priest figure to add to their monster pool. You can summon this in a similar vein to a standard cultist; however this costs you three power to do so. They generate you one power, can hold gates, and in all purposes function as a regular cultist. What they do is offer you huge flexibility. You can sacrifice your High Priest at any point to instantly gain two power. This means you can power through a weaker turn, respond to enemy aggression, or eke out just a little more oomph at an opportune time.

The strongest benefit is that they provide additional opening move options. After repeated plays, factions like Cthulhu or Crawling Chaos get a bit stale in this regard. Now you could mix things up and go for an early High Priest. This bumps your power output immediately and keeps a weapon tucked in your back pocket.

One particularly nasty combo is recruiting a High Priest as Windwalker to give a bounce back hibernate. By that I mean, if you spend the entirety of your power outlay you can sacrifice the High Priest and then Hibernate. Next turn you can recruit your High Priest again and you've come out with a net positive most likely. 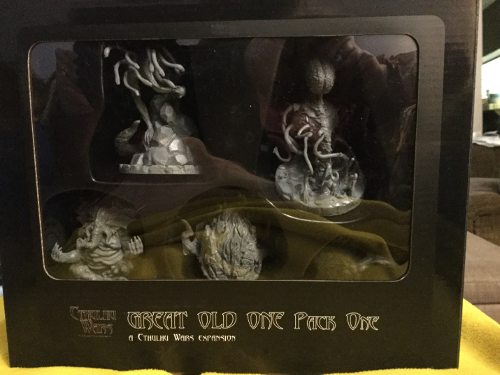 Something about the black packaging makes these feel DELUXE.

MB: That sounds great- I haven't picked up the High Priests yet, but that sounds like a really good addition at a low cost. It also sounds quite a bit more subtle than the Great Old Ones pack, which bring some of the Mythos B (and C) listers into the game with some pretty shocking results. For purposes of review, I picked up the Great Old One Pack 1 which features Yig, Mother Hydra, Cthugha, Abhoth and Chaugnar Faun. All of these are neutral Great Old Ones- not unlike Azathoth- that a player can recruit and command. And all of these have CRAZY abilities. As is the case with all of the Cthulhu Wars expansion material, we are not talking about "+1 to combat rolls" kind of stuff. We are talking about super powerful "change the game" stuff.

For example, Cthugha (the one that looks like a giant flaming meatball) allows you to use its Fire Vampires ability to "spare" enemies by reducing kill results to pain. When you do this, you drain them and get 1 power. If you get Cthugha's spellbook, that ability changes and you get an Elder Sign for sparing them- which are analogous to victory points in this game. Mother Hydra "stings" cultists in water areas and evicts them. Her spellbook lets you take all of the Acolytes in your pool and drop them anywhere you have units. That is nuts. Then you've got Yig, who makes your Acolytes venomous and makes it where other all other players either gift you one power or you gain a Doom point per refusal. You may not always have a use for these Great Old Ones, but when you do...you'll cackle with glee seeing them do their nasty business across whichever board you are playing on.

This is really fun stuff, and working out how to use these abilities with your faction and any other neutral elements you might be using reveals all kinds of crazy combos, advantages, loopholes, and general insanity. Part of the genius of Cthulhu Wars, the part that is not apparent with just the base game, is in how Sandy Petersen has figured out all these different ways to spoil and corrupt his own system. There are all these little niches where special rules like these slot right into the game and transform it. It may be a little hyperbolic, but in this sense the modularity and volatility puts the game in a class with titles like Wiz-War and Cosmic Encounter.

CT: Yes, the Azathoth expansion is very similar although offers a wider scope. Instead of simply offering neutral Great Old Ones, we also have neutral monsters and neutral spellbooks. All of these offer additional strategic options and new paths of play. Since anyone can grab them, they also offer an impetus to race for their control to a certain degree.

MB: What is more of an issue, I think, is that when you add more and more of these expansions, it all gets really quite complex. Not complicated that is a very different kind of thing. But with all of these Great Old Ones, neutral monsters, map elements and so forth. That said, all that volatility and all of that modular complexity- it's totally worth it, especially considering that this is a game I've already played more than any other single game barring Games Workshop titles over the past year. We keep going back to it, adding on to it, and it keeps paying us back in great, memorable gameplay and an almost constant sense of discovery.

CT: For sure. It took me awhile to fully adjust to expansion elements and I was hesitant. Part of Cthulhu Wars' charm is its simplicity and direct nature. It's much more about playing against the other players as opposed to the system and much of the nitty gritty is in above board social combat. Once you become familiar with the game and the expected strategies and capabilities of each faction, that's when you want to toss a stick of dynamite into the pool and watch the fish scatter. Whether it's Azathoth or Yuggoth doesn't really matter, what matters more is that the preconceived notions have been challenged and that level of mystery living right at the surface has returned.