MB: Let's be blunt about it. Cthulhu Wars is monstrously expensive. It's a Cadillac game, meaning that it is very much a premium title with a price tag to match the size of those gigantic Great Old One figures. For a faction expansion you are looking at $60- enough to buy another game. But Cthulhu Wars is probably better than that other game you might be considering. It is one of the best Dudes on a Map games on the market- I gave the game five stars in our review here at The Review Corner and I named it the best game of 2016. Recently several expansions from the first wave of releases have hit Miniature Market so myself and Lead Writer Charlie Theel thought we would break down a selection of what's available to give you an idea of what to expect from them and to help guide you toward the right purchases for what you want to get out of the game. For part one Charlie and I are going to take a look at some of the faction expansions, which are likely to be the top of the list for anyone looking to add on to a base game.

Charlie, you picked The Sleeper and Azathoth. Give us a high level take on what each offers. 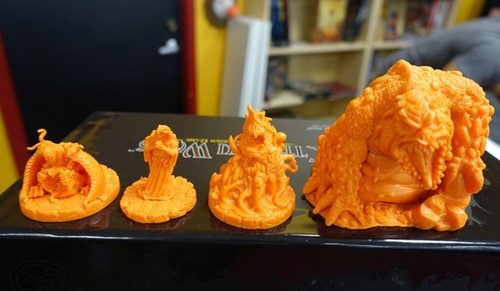 Tsathoggua and the gang.

CT: While these expansions are pricey, they have a huge effect on play. Sleeper is the more traditional of the two, featuring a new player faction focused on Tsathoggua and his minions. This bloated monstrosity is defined mostly by his tricks. He gets to usher a free unit onto the board between every round, he can remove one of his gates from the map and host it on his player board, and he can fall into lethargy and pass to postpone action. It's a more thoughtful, tentative playstyle that slowly grumbles before steamrolling at the end of the round when everyone else is out of power. 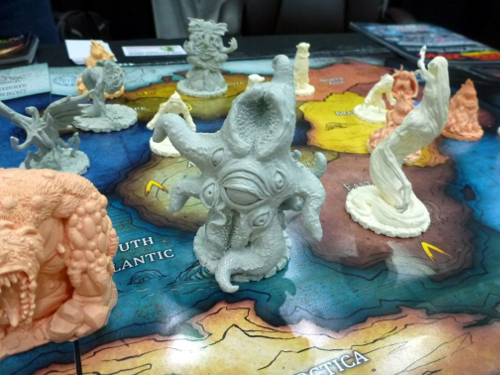 Azathoth is something entirely different. While packaged like a faction pack, this is really a set of modular components that can be utilized in a few ways. The first is the neutral Great Old One Azathoth. He sits to the side of the board, brooding and awaiting his call. A player can bring him into play and enter into beast mode. He's extremely interesting because his strength is set by the other player's at the table. They must choose to act selflessly and set his attack power low, or bicker and backstab and let Azy-sorry, that's what his buddy Cthulhu calls him-run loose. Other elements of the Azathoth expansion include neutral spell books that players may take instead of their own, and neutral monsters you may recruit. The big thing about these neutral elements is that they throw a stick of dynamite into your established play-styles. All of the sudden Yellow Sign can gain a huge new combat threat, or maybe Black Goat can abandon Groth and grab a new trick. It's compelling because it's a meaningful shift in the dynamic and it's unpredictable. Because it's unpredictable, it's ultimately exciting.

MB: Weâ€™ll get more into neutral elements next time- Iâ€™ve got the Great Old One Pack One on my stack. As for the factions I picked, I went with Opener of the Way and Windwalker. 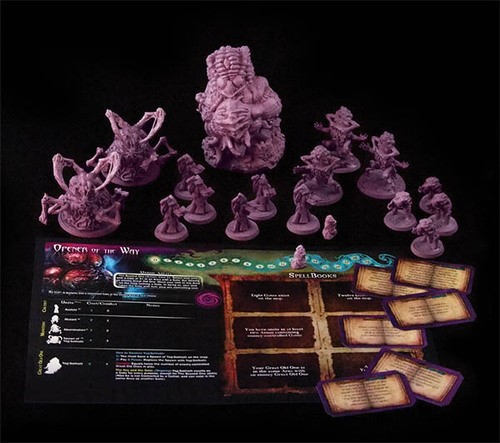 Opener of the Way is all about Yog-Sothoth, the Key and the Gate and so forth. This is a really interesting faction that definitely plays more like an â€œadvancedâ€ option. The focus is on gate manipulation and mutations, which results in some very powerful options. You can start anywhere on the map and then the faction ability is to pick up any monster costing 3 or more power and move it- along with a gate if there is one in its area- anywhere on the map without a gate. This is kind of nuts because you can have enemy forces bearing down on you and then you just blink out to somewhere else. You also have access to Million Favored ones in the spellbook, which enables you to upgrade your monsters on the board. If you pick up the They Break Through spellbook, you can summon monsters right on top of enemy gates. Oh, and Yog-Sothoth himself (?) acts like a gate- you can summon monsters into his area.

Windwalker offers up Ithaqua and his chilly minions. The faction requires a very different play style as it builds slowly with a more reactive stalling strategy, with other playersâ€™ actions often impacting your spellbook. It is also a faction all about â€œcharging upâ€ for big, nuclear turns and really nailing the Ritual of Annihilation- especially since one of your abilities caps the cost at five power. You can take a zero-cost Hibernate action, which lets you gain power based on the other Great Old Ones on the table and then bank it for the next turn- it costs you the remainder of your actions, but it can be worth it to save up. You get two Great Old Ones with this bunch, Ithaqua himself and Rhan Tegoth. I also really like the Ice Age ability, which lets you plop down a big iceberg token in an area and increase the cost of actions there by +1.

You are absolutely right; these factions have a tremendous impact on play. This is one of the things I really love about Cthulhu Wars, how each faction is completely different yet precisely balanced.

CT: One huge value-add that's not normally considered when discussing expansion factions is how they alter the dynamic at play. They have their own unique capabilities and awesome powers that feel great to wield, but they also provide the benefit of shifting the tactical space- a game where you throw in Sleeper or Opener of the Way feels very different from the perspective of other factions. It forces you to alter your strategic considerations and challenges assumptions. You'll need to pressure Tsathoggua so that he can't just keep slumbering. You'll need to shore up your defenses so that you can resist the gate jockeying of Yog-Sothoth.

These interesting dilemmas extend the life of an already surprisingly deep game.

MB: Yes, it is awesome that even adding just one faction to the original four completely changes the game. You are suddenly playing with (or dealing with) very different agendas, short term goals in the spellbooks, monsters and concepts. Yet they're pretty gentle, so to speak, with the basic rules. One thing I especially like is how each faction comes with a booklet that gives strategy guidance for both playing and countering the new sides.

So when I am thinking about value, I still think $60 is a lot for these but by the same token, they bring so much to the game- more than many full-fledged expansions for other games that I have played. And you do get a lot of really nice sculpted plastic.

CT: For sure. These are big outlays and you will want to acquire them thoughtfully, but they're not likely to collect dust. They're so easy to integrate and offer such little overhead that you will get them to the table. Additionally, since such a large portion of Cthulhu Wars is the experience of playing the other participants as opposed to the ruleset, they are guaranteed to change the experience.

MB: That is a great point- the rules, even with these faction expansions, are really quite transparent. It's a short distance, a short learning curve, to get to the fun. And when you get there, the faction distinctions give you a lot of variety to play with.

So if you had to choose one, which would it be?

CT: If the plan is to acquire these additions slowly, the choice is tough. I don't think one faction clearly stands upon the rest as they are all thoughtful and well developed. The best possible choice is the faction that speaks to you. Whether that's due to the interesting massive sculpts, a specific spellbook combination, or merely the fluff. You can't really go wrong.

MB: I would agree with all of that but I would add one caveat. The four factions in the base game are great and if there never were any more, I would still be satisfied. If the game interests you, play for a while with just the four and then look into these additions- you'll have a better idea of which of them will add the most to _your_ games. For my part, I'll have one of each please. These are quite possibly the best "add a faction" expansions I have ever seen.