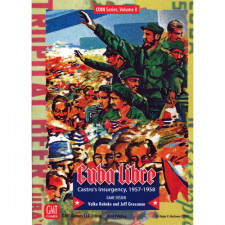 MB: Iâ€™m a COIN newbie and this is my first encounter with the system, and I have to say that I am completely floored by this design. I absolutely love the COIN system (originally created by Volko Ruhnke) as Cuba Libre presents it, and I love the subject matter. More granularly, I think the way this game handles completely asymmetrical factions with unique but sometimes codependent agendas is brilliant and in some ways it is the closest thing to EONâ€™s classic Dune â€œwheels within wheelsâ€ concept Iâ€™ve seen since that game. But itâ€™s also a game that makes for an outstanding solitaire option thanks to a very sophisticated flowchart-based triage system for non-player factions.

Dan, I know you are a COIN veteran and I know that this isnâ€™t going to be much of a â€œhead to headâ€ (more of a â€œhug to hugâ€), but are they all as good as Cuba Libre is?

DT: You know, thereâ€™s a bit of a paradox to that. While Iâ€™ve played every game in the COIN series, my most-played of the bunch is Cuba Libre. If you were to ask me for a recommendation, Iâ€™d say Cuba Libre. The one I usually have the most â€œfunâ€ with is Cuba Libre, if only because Iâ€™m a huge sucker for American Mob history. And yet Cuba Libre isnâ€™t my favorite COIN game.

What it is, on the other hand, is accessible. Itâ€™s just such a breeze to put on the table and play. This makes it an easy entry point for the series â€” a series thatâ€™s simultaneously deep and both historically and narratively rich â€” and for that reason alone this is the one I tend to shout about from the rooftops. 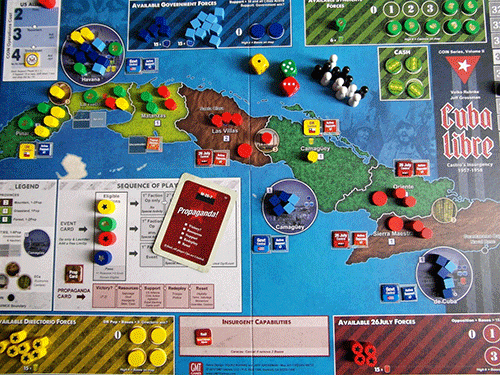 MB: Yes, I was really surprised at how accessible it was- you hear about Fire in the Lake, Liberty or Death and some of the other COIN games higher on the complexity scale and they sound maybe a little too long and too detailed for the dabbler. But once you play through the great tutorial and get a handle on each of the four factions, you come to realize that this game- despite all of the wargame bluster- is really a kind of area control game.

DT: More than any of its cousins, Cuba Libre is the one that most directly embraces its role as Area Control Plus More Stuff, in the sense that youâ€™re pushing for something very recognizable to board games (area majorities), then tackling all these additional ideas about nation-building, terrorism, asymmetrical politics, and search-and-destroy tactics. But itâ€™s all relatively easy to grasp, because everything spirals back to that idea that you want to identify the regions that will be important to you and then appoint yourself the head honcho of them.

MB: Thatâ€™s exactly right. Youâ€™ve got these divergent agendas and gameplay choices that directly reflect them. Yet everything fits together and there are these amazing- if somewhat fixed- relationships between what each faction can do. I think itâ€™s a stunning design if only because it pulls off this kind of wild asymmetry but within a fairly rigid mechanic context. And it works as a solitaire game, which is nuts.

DT: Itâ€™s my understanding that youâ€™ve played quite a bit of the solo game. This is something Iâ€™ve mostly missed out on, as Iâ€™ve only used the spreadsheets to fill in for missing players, so why donâ€™t you parse that for a bit? What makes Cuba Libre such a stellar game for solo players?

MB: Iâ€™ve played it solo both playing all four factions with full decision-making (which is actually quite fun and satisfying since there is no hidden information to track or assume knowledge of) as well as with the flowcharts provided in the game to automate the non-player factions. They are the same ones you use if you are playing the game with less than four to simulate the non-player factions.

I like that it plays well both ways, but the flowcharts are particularly well done and provide a sense of playing against actual opponents making decisions. Granted, it is all based on â€œif-thenâ€ triage to determine what the non-player factions are going to do, but it provides a strong sense that the faction is pursuing its agenda and specific goals. I canâ€™t imagine the development that went into making these flowcharts play the game well. It isnâ€™t nearly as sophisticated or dynamic as the AI system in Navajo Wars, but it offers the solo player an option that feels completely integrated without tacked-on processes or additional components.

The downside is that the flowcharts actually increase the complexity somewhat, and working through them on a non-playerâ€™s turn takes some effort that you do not otherwise encounter in a multiplayer game whether face to face or online.

DT: I want to return to what you mentioned about the alternating codependency and antagonism between factions, because thatâ€™s the one thing that might prevent this from being a â€œhug it outâ€ conversation. First of all, I adore the way the factions work. The Government is powerful but needs a tiny bit of support to keep going. The 26 July Movement â€” the primary â€œinsurgentsâ€ â€” are plucky and easily recruited, but struggle to accomplish much on their own. The Directorio is similarly tough to uproot, but needs to both seize and maintain a wide swath of territory in order to succeed, neither of which are easy.

The agent of balance in this Cuban sandwich â€” the pickle, if you will â€” is the Syndicate, the American Mobsters who want to be your best buddy. Theyâ€™re the ones who can hand out dirty cash, which anyone can launder for bonus actions. In a game where actions are at a premium, this is no laughing matter. The problem is that the Syndicate often winds up being sort of boring to play, especially in the later game. Since theyâ€™re always in a vague dÃ©tente with everybody, they rarely get into serious scrapes. They donâ€™t even have a regular option for attacking their enemies. Contrasted with COINâ€™s other â€œgreenâ€ factions â€” the Cartels from Andean Abyss or the Warlords of A Distant Plain â€” theyâ€™re the dullest of the bunch.

MB: I think the Syndicate was likely the toughest part of the game to design, and I think their position is somewhat awkward in a game where youâ€™ve got two types of armed government forces and two different types of guerilla/militia insurgents locked in more direct conflict. Thereâ€™s almost a kind of disconnect, almost as if three factions are playing more of a wargame and then youâ€™ve got the Syndicate off to the side playing more of a Eurogame. I mean, they are building casinos while everyone else shuttles units around, kidnaps people, shuts down resources and struggles for the future of Cuba. Itâ€™s true, historically, that they were a significant political factor and I think they need to be in the game but I can see where you are coming from on this point. But Iâ€™ve not actually played with the Syndicate in a multiplayer game so Iâ€™ve not really become bored with them. But I still think that they are a cool inclusion, if a little dull.

DT: But then again, Iâ€™m calling them the dullest, not dull. Nothing in Cuba Libre is dull. Not when youâ€™ve got four factions waging open war for control of Havana. Did I mention how much I love Cuba Libre?

MB: And I will join you in that appraisal. I think this is an awesome game driven by a system that feels like a true evolution of the card-driven wargame, with social, political and cultural elements foregrounded along with the more traditional consim sorts of concerns. The history is compelling, especially in light of recent changes in Cuba, and itâ€™s a great example of the kind of intelligent, thoughtful and thematic game design at which GMT excels.

DT: Agreed. GMT is certainly at the forefront of doling out compelling historical portrayals, and the COIN system in particular excels at expressing conflicts that are at once dynamic and grounded in the annals of history. Consider how fluidly the game pits an inefficient bureaucracy against determined upstarts against the elites of the economy. It grasps something that board games have long misunderstood about warfare, that war is less about a handful of sides of roughly equal strength and ability, and more about every side pressing what advantages they have while praying their weaknesses donâ€™t get noticed and exploited.

Itâ€™s also a fantastically flexible system, especially now that itâ€™s moved from modern insurgencies to topics as far-flung as the American Revolution and Julius Caesarâ€™s occupation of Gaul. And I can attest that every volume theyâ€™ve released thus far is utterly engrossing.

Still. Anyone whoâ€™s feeling intimidated ought to start with Cuba Libre. This is by far the most accommodating entry point into the COIN series.