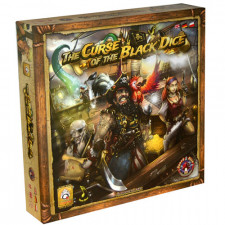 Curse of the Black Dice Review

When I think of â€œpiratesâ€, I can only think of two things: Somali pirates taking over ships on the high sea in the modern era, or â€œarrrr, Mateyâ€. Now, Iâ€™m not particularly enamored with the latter, and while I think the former would make an awesome setting for a game, but Iâ€™m willing to try anything so I asked for a copy of Curse of the Black Dice, hoping for the best. As luck would have it, I rolled exploding sixes on this one because we absolutely adored this little twenty minute dice chucker. Itâ€™s one of the better games Iâ€™ve played that utilizes piratical types as the main attraction. 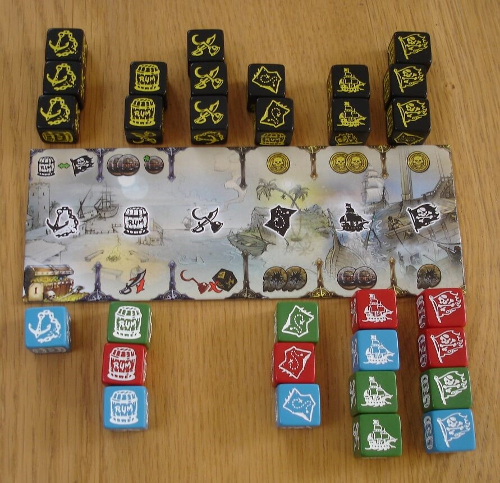 Itâ€™s worth mentioning that the rulebook is confounding, and appears to be an English translation by a Chinese guy who was translating from some ancient Baltic dialect. Itâ€™s got all manners of weirdness and the explanation illustrations donâ€™t quite explain things well enough for my tastes. I ended up looking online to get some answers after my first play, but once I did that, it was all gravy (or rum, perhaps) from then on.

Some people donâ€™t like co-opportunistic games, as I like to call games that are co-operative but have one person who wins at the end rather than the group, because they feel that there might be a spoiler. You know the situation: someone who isnâ€™t doing well can act as a spoiler who will intentionally duff things to have everyone lose, since theyâ€™d rather nobody win if they canâ€™t. While this is certainly a possibility, if your friends are the kind of player who would intentionally sabotage a game because their spoiled sport ass canâ€™t win, you should seek out a new friend. The reality is that this game works very well as co-opportunistic, mostly because the time investment is so small. You can go from unboxing to playing to re-boxing within a half an hour with four. Nobody is going to spoil that, and even if they do, youâ€™re not out much.

What I love about this game is how your goals change every round, since the eponymous black dice are constantly shifting the goals. Beyond that, there are four built-in scenarios that inject variations into the goals, so you canâ€™t really come up with repeatable, grand strategies in order to win regularly. Another one of the little awesome things that are built into the game are pirate tiles which you can spend your rum tokens, the currency of the game, to activate and reap the powers that they offer. This was a really slick way to mitigate the overwhelming luck factor in the game and make it more than â€œPirate Farkleâ€ or something.

The piratesâ€™ powers allow you to manipulate the dice in some way or another, with most of them being mutually beneficial to all players, but some are quite spicy in that they allow you to screw other playersâ€™ dice up, potentially denying them rum or gold, which are the victory points of the game. Unfortunately for players, you can only activate each pirate a set number of times, and if all of the pirates have been expended (the rulebook specifically says that theyâ€™re drunk) then all players lose. This is mitigated by the fact that players can dump a piece of gold in order to order a venti Pikeâ€™s Peak for a pirate and wake them from their stupor.

The only complaint I have with the game is that some scenarios require you to perform one or more of the six possible missions on each scenario board, and since the black dice control which missions are available, you can end up playing several rounds before you can even attack the target missions. Itâ€™s a bit frustrating to have your ship riddled with cannon holes or torn asunder by the kraken, and have no real recourse aside from just surviving the round and hoping that you even get an opportunity to attack your foe next round. 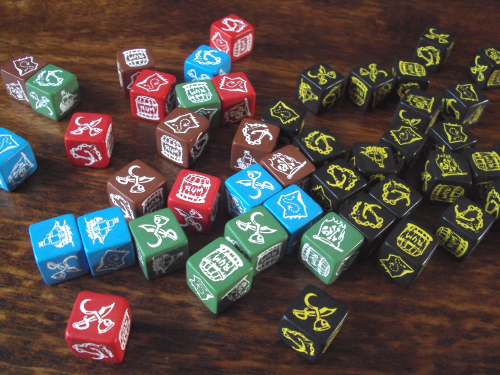 All in all, Curse of the Black Dice is a quick, fun, and potentially quite nasty little dice chucker that Iâ€™ve played twenty times or so now. Itâ€™s perfect for sitting on the deck and playing a quick game while sipping on a Rolling Rock. There are no cards in the game to be blown around, so itâ€™s a perfect outdoor game that doesnâ€™t require a lot of table space. If youâ€™re looking for a light, dice chucking game to play with a friend or three, this might be your bottle of rum. It most certainly was a pleasant surprise, because despite being such a relatively simple game with fun mechanics that we have really dug. 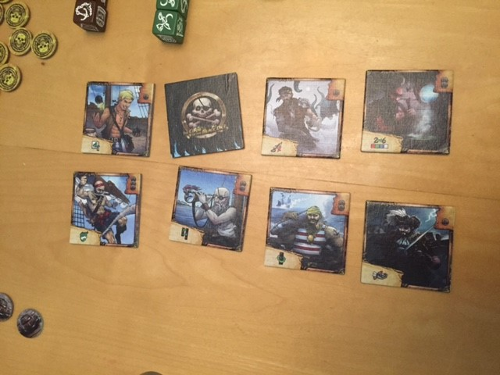