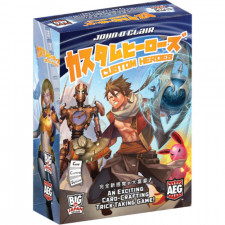 Custom Heroes might have the most generic name ever. With such a bland name, you may not know what kind of game to expect. Is this about creating Build-A-Bear superheroes? Is it the untold story of the brave airport Customs Officers? Though I have may just come up with some of the most brilliant game themes ever, Custom Heroes is none of those things. Rather, itâ€™s a reimplementation of the Japanese card game Daihinmin â€“ a climbing/shedding game similar to The Great Dalmuti. What AEG did to the game, aside from slapping a â€œBig in Japanâ€ logo on the box, is add the new card-crafting mechanic.

Instead of adding cards to a deck as in deckbuilding games, card-crafting changes an attribute of your card by sliding in a sheet of clear plastic over a base card. In Custom Heroes, you have the choice to alter your card value or even endow it with a special ability. Before we get into that though, letâ€™s talk about why youâ€™d even be doing it in the first place. 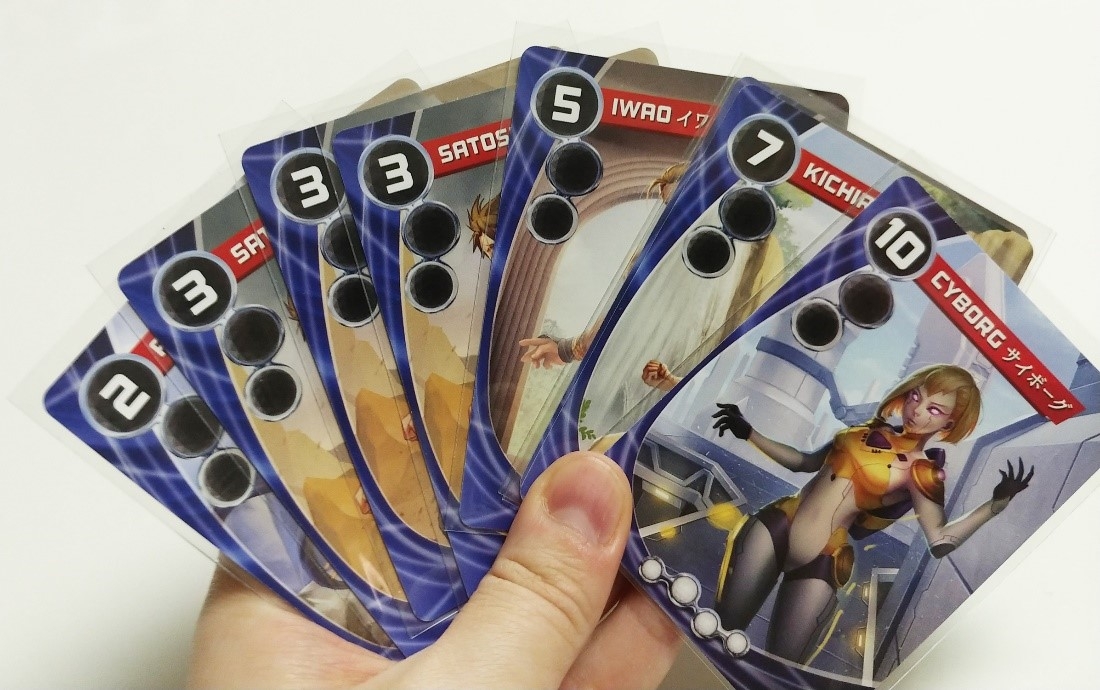 A starting hand as basic as a pumpkin spice latte.

The goal of Custom Heroes is to get rid of your hand of cards by playing one or more cards of the same number. Based on player count, you receive a certain number of victory points according to going out first, second, or onward. There are no suits in Custom Heroes, so following what was played is simply playing the same number of cards with an equal or higher value. For example, John leads with a pair of 3â€™s. You follow with a pair of 4â€™s. Chris also plays a pair of 4â€™s. Because the value was the same, the next player in line, Paul the Card Shark, gets skipped. It sounds rude, but you probably donâ€™t want the player to your left to get an opportunity to dump cards if theyâ€™re in the lead. Besides, no one wants Paul to win anyway. Play continues around the table until everyone has passed and a new round begins as before, with the player in last leading a new set. 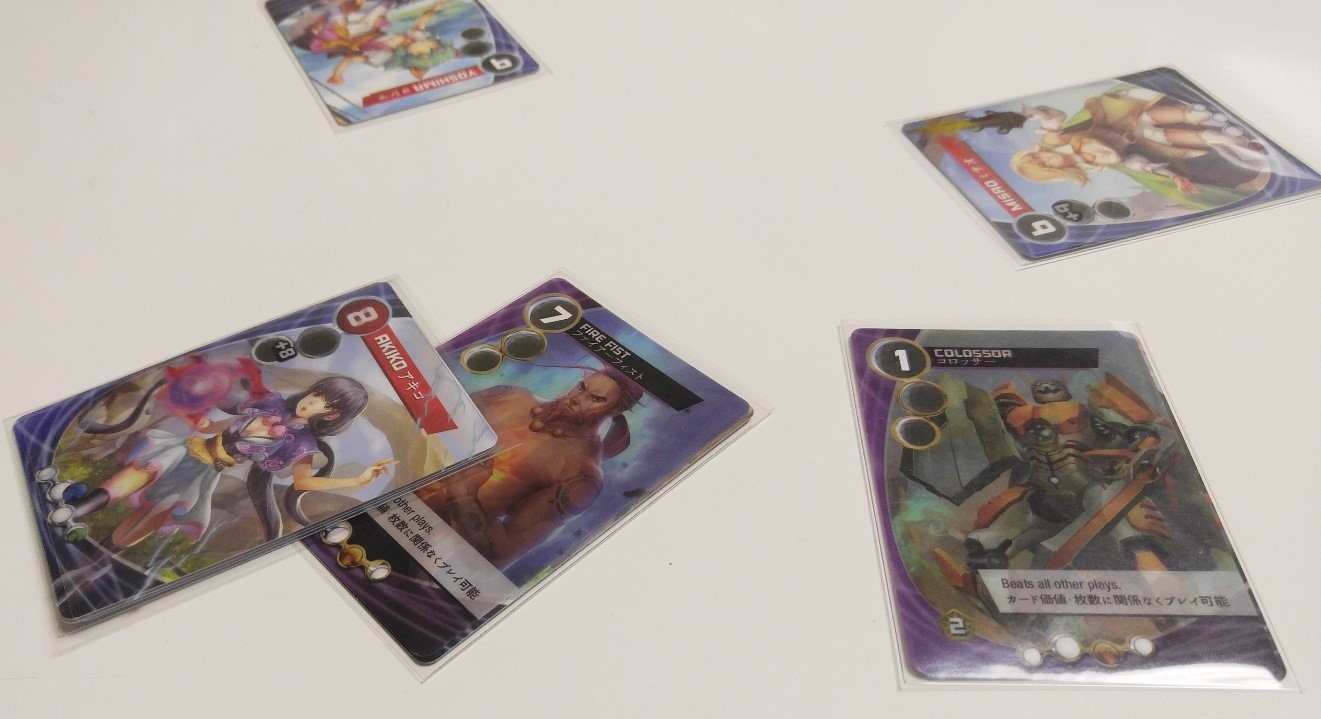 Oh, you played a 16? My Colossor thinks thatâ€™s cute.

What makes this standard formula of a classic card game have some dynamism are the advancements â€“ those clear plastic sheets that you slide into a sleeve to change the card. Need a triplet of 10â€™s, but you only have two? Slide that +2 over your 8 and now youâ€™ve got it. Keep in mind that advancements are permanent for the game. That card will always be worth 10 now and cards get shuffled and redistributed between rounds. There is no guarantee that youâ€™ll see that card again, but hey, it was fun while it lasted. Advancements do more than just add (or subtract) to a cardâ€™s value. Some come with special abilities that you can pay to activate when you play the card. Kodora cards provide you with the option of betting 2 of your victory points to earn 2 more if you win the hand. Tempting! Charmy lets you reverse the direction of the climb. Now youâ€™re trying to play descending numbers instead of ascending. Ridiculous!

Because you can add an advancement to a card at any time, Custom Heroes is as chaotic as it is tactical. You do what you can at a given moment. You canâ€™t worry about the future or even plan for it. If you think about it, this kind of in-the-moment play is present in many traditional card games. Sometimes youâ€™re just not dealt as good of a hand as someone else. You might be eyeing your four 9â€™s, waiting for an opportunity to plop those bad boys down, but it never happens because you donâ€™t lead a turn. This might leave a bitter taste in your mouth coming from more modern gaming perspectives where weâ€™re used to more control over our choices. However, the fun in Custom Heroes really comes from the emotional ups and downs due of the card-crafting rather than actual card play.

Gotta wait for the right time use these.

At this point in card-craftingâ€™s life, itâ€™s hard to tell if itâ€™s just a gimmick. Custom Heroes is only the second game to use the mechanism. Itâ€™s certainly something that would be better served by a digital implementation. With each advancement that you place on a card (and there can potentially be four), the sleeve gets thicker, sometimes feeling cumbersome to hold. Itâ€™s also noticeable when youâ€™re dealing out cards. This doesnâ€™t mean getting those cards into your hand automatically makes your hand better; it just makes it more exciting.

Custom Heroes also occupies a weird space. Itâ€™s not quite a filler and not quite aâ€¦ well, whatever the opposite of filler is. Sometimes, you start to settle into the game and it ends. This abrupt finish means you might not have had a chance of winning if someone jumped into the lead early on. Games that go on longer feel more satisfying as scores are closer and you see more advancements come out. Variability among games is another of the many quirks Custom Heroes has. It really comes down to how much that card-crafting grabs you. Iâ€™m not confident it will be a long-term mainstay, but I wouldnâ€™t mind crafting a few more crazy cards for now.