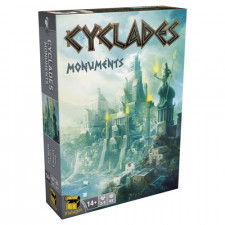 Cyclades is that tough wily veteran at the back of the room. They ignore the new blood pouring into the reverie and instead brood in quiet confidence that after all these years, they still have it. While Blood Rage, Inis and others have continued the war, Cyclades was one of the first hybrid Euro-style and Ameritrash designs. It received a great deal of praise and its momentum birthed the Hades and Titans expansions. Include the latter extension and this still measures up against the best of the best.

Monuments is a different beast. In terms of scope it's rather diminutive. The equivalency is one of the previous modules such as artifacts in Hades or the metropoles with special powers in Titans. As a result it requires a much smaller outlay of Drachma and won't upset your delicate storage solution that's hanging by the skin of its teeth after that last huge plastic Kickstarter shipment.

Inside the box you'll find 10 bi-colored plastic monuments and their accompanying cards. They're solid and attractive pieces that fit in seamlessly with Cyclades' wonderful aesthetic. In terms of game-play impact, well, that can range from somewhat significant to simply on par with the price tag.

Monuments can be acquired by a player as soon as they meet the requirements. Each lists two buildings found in the base game, such as the Fortress or University, which must be gained in order to build the monument. You then place the monument on a space you control and gain the associated ability. There's a wide range of powers and you only have a small number available in each play. You can do things such as sacrifice a fleet each round to top deck the creature deck and gain the power drawn. You can also unlock the ability to purchase an unlimited amount of Philosophers if you win Athena. Maybe you just want to pop out a ship every single round for free. It's readily apparent that these effects can be substantial boosts if utilized appropriately, but they're also not wide-sweeping game changers that produce an uneven playing field. 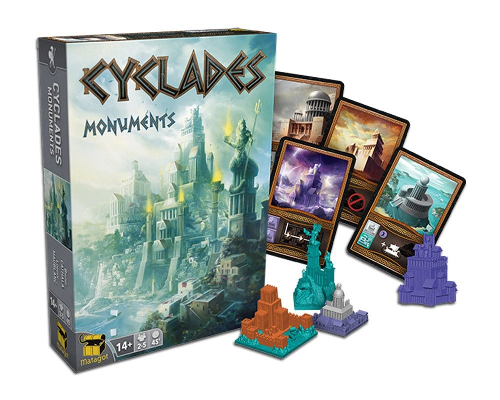 The biggest gain with monuments is the opening of a new strategic vector. The building requirements will influence your short term goals and have you gunning for certain gods you would normally avoid. It changes the valuation of buildings play-to-play and subsequently adjusts the feel of the game without altering its brilliance.

The risk here is that these elements abet the rich getting richer. While there is a small amount of that, they can always be sacked and stolen from your opponents. Additionally, Cyclades as a whole is a design that naturally buoys players at the bottom runs of the competition. The requirements of 2 victory points keeps everyone relatively in line and it still feels as though the person at the rear can pull a significant coup out of nowhere. That's just the nature of the beast and a monument gifting a special power isn't going to alter that.

If it's possible for a release to simultaneously be understated and potent, then Monuments is. It also cements itself as the only real expansion element that seamlessly flows with all other extensions. That's an aspect of design this game has struggled with historically. This is in no way mandatory, but when you factor in its cost and its utility it really feels like a no-brainer.