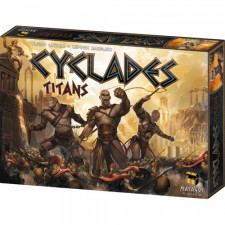 In the mythology of the ancient Greeks, Kronos was the Titan lord of time and ruin. He ruled the cosmos but was afflicted with the fear of his sons usurping his reign. Consumed with paranoia, he would swallow each of his sons as they were born to preserve his legacy and terror. This lovely chap is the new god on offer in the Cyclades: Titans expansion and I don't know about you, but when it comes time to bid I'm going all in.

Cyclades is an underrated Euro/Thematic hybrid that blends auction mechanics and conflict-oriented area control. It's beautiful, elegant and enjoyable to play. One of the common minor complaints about the base game is that the requirement of winning the favor of multiple gods in order to invade a neighbor was a bit restrictive and held the game back from reaching its tempo and a higher level of dynamism. The inclusion of Kronos and new, potentially devastating Titan units aims to guide the game towards a more aggressive and fluid play-style that should keep players on the edge of their seats.

Winning the favor of Kronos via the auction can also potentially accelerate the game toward the victory condition of acquiring two metropolises. Kronos grants you a free building from a god tile above it on the auction offer in addition to granting you the option of purchasing a Titan. This combination rewards flexibility and adds nuance to the bidding process as Kronos is a sexy and immediate upper tier choice regardless of your overall approach to victory.

This large expansion requires the use of a completely new board which features a more clustered land mass with fewer islands. This dovetails perfectly with the new Titan units that allow players to pay gold during their turn to move all the units in a Titan space to an adjacent territory. The aggressive and free- ranging Titan movement is intimidating and provides for psychological impact as multiple fronts of war are established and players dig in, fighting bitterly to win the favor of Ares and Kronos.

The expansion also includes two additional modules that can be mixed in to spice up gameplay as desired. The first is a set of five magical items that are included in the Mythological creature deck at the start of the game. When these items appear players can buy them as normal and place the accompanying miniature in one of their territories. The items provide a wide range of special powers in addition to generating one extra income each turn. The general design philosophy behind these new items seems to meld perfectly with the more direct and headlong direction Cyclades is taking with this expansion as players are able to deftly maneuver armies, strike with fury and plunder the surrounding land. They also open up a clever new win condition if a player is able to acquire all five, a task which is necessarily difficult and a low odds proposition at best.

The second module added consists of five random metropolis cards, two of which are used every game. These cards correspond to a special metropolis power you can claim if you are one of the first two players who build one. These can be quite strong and give a substantial boost to the owner. But they are balanced steadily due to the fact they can be lost as well as the inherent multiplayer punishment of jumping out to an early lead in this game. I really like the incentivized nature of building a metropolis early, which can be extremely detrimental in base Cyclades as players hone in on you and start picking off your territories.

The combination of all of these elements makes for one of the best expansions I've recently played. Much of the industry is content with churning out content expansions that bloat a game or take it in a direction that belies its natural simplicity- typically for the worse. Titans takes the approach of stripping down the base game and redefining what its values are without altering the core identity and mechanisms that make Cyclades such a fantastic design.

What I found especially fascinating is that this expansion adds several new elements to massage gameplay yet the entire experience is actually quicker and tenser in its new format. Besides Kronos offering another avenue to building acquisition, random buildings are seeded on the board at the start of play pushing the game towards a rapid pace of conquest and submission. Itâ€™s as if everyone has a head start, cutting out some of the less interesting parts of the design and elevating the whole design to a more flexible and exciting experience as players quickly find themselves in contention, butting heads over not simply the favor of the gods but also the precious Greek soil below their citizenâ€™s feet. The fact that such epic sways in momentum and board position can occur in less 90 minutes is astounding.

Cyclades: Titans offers power and strength of which you can only beg to yield. It leaves you at the whim of the crushing limbs of a fallen race and espouses a level of destruction and incorrigible fortitude that gets the blood pumping. Throw down your gold, swallow your children, and crush your neighbor's souls.