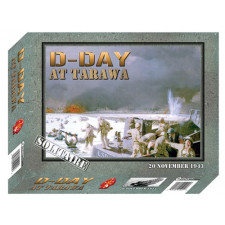 This is a John Butterfield design.

For many of you, those six words will be enough for you to make a decision about this game. Butterfield has been designing wargames since before I was born, and this is one has his fingerprints all over it. Love him or hate him, D-Day at Tarawa probably wonâ€™t change your mind either way, but fans of his kind of wargames will certainly find something to love here on the bloody Pacific shores.

As is typical with this storied designer, D-Day at Tarawa utilizes a very procedural design, and you have to be comfortable with that throughout. You have to trust that the meticulously written rules and complex layers of the design will not leave you stranded. Itâ€™s like the designer is carefully, gingerly walking and talking you through each step, and as long as you listen to him to the letter, youâ€™ll be alright. 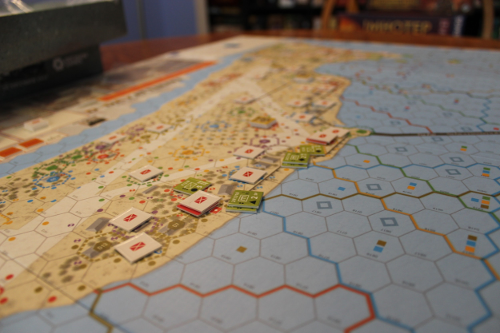 For those gamers who are able to throw themselves in, itâ€™s a real joy. The gameâ€™s cards give it an awesome sense of flavor, whether itâ€™s watching helplessly as your transports drift right into enemy fire and your soldiers are forced to wade to shore as bullets cut them down one by one, or activating the exact Japanese unit you absolutely did not want to activate this turn. The simple menu of actions allow lots of player input, while still giving you a sense that youâ€™re never quite in complete control. Nailing this dual nature of warâ€”the sense that you desperately need to do something now with the uneasy feeling that youâ€™re absolutely not in controlâ€”is a hallmark of a good wargame design, and on this level, D-Day at Tarawa is a real success.

The enemy AI utilizes Butterfieldâ€™s very clever color-coded fields of fire system. While the visual elements can make the game board appear messy at first, once you understand the system, youâ€™ll realize the board contains embarrassing riches of information about the game state and which action you might want to carry out next. Youâ€™ll be able to tell who is likely to take fire when the AI activates, whoâ€™s a sitting duck for heavy fire, which Japanese units are vulnerable to attack, all from a quick glance at the board. It really is something to experience, and wargamers who are at all interested in the conflict and solitaire designs really owe it to themselves to give this system a try.

Still, its procedural nature is going to turn some people offâ€”weirdos who donâ€™t like reading rule 5.2 and being sent to section 8.1 and then being asked to carry out procedure 11.4 and then reference the separate fire table to complete one small step of the complex turns. For me, the procedure is comforting, because itâ€™s hard to lose your step when youâ€™re being walked piece by piece through the game. All the same, it does mean I have to be in the right mood for D-Day at Tarawa, since itâ€™s not the kind of solo experience I can set up and run through from memory. Itâ€™s not exactly a narrative-focused design where I can sip some tea, kick back, and enjoy the story, and yet the narrative that emerges is one of desperate rushes and tragic loss, as befits the Pacific Theater. 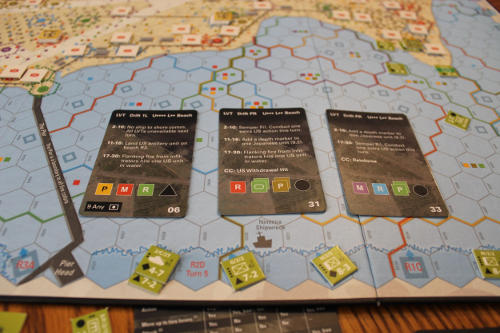 Will I win the battle? Only if itâ€™sâ€¦ in the cards.

With multiple scenarios available, you can leave this puppy set up for days or even weeks, as Iâ€™ve done with numerous Butterfield designs over the years. Still, Iâ€™m getting to the point where my attention span ainâ€™t what it used to be, so the quick, ten-turn beginner scenario is the one Iâ€™ll be going back to time and again. It gives you a full sense of the game without some of the unit micromanagement the longer scenarios seem to entail.

The game features an attractive, high-quality mounted board and well-done cards and chits. They arenâ€™t fancy, but they are highly functional, a quality thatâ€™s desperately needed in a design this intense and punishing of those who may otherwise make a rules error. Various charts and aids are included, as well as a detailed twelve-page description of the battle that history buffs will surely treasure. By wargame standards itâ€™s a real lookerâ€”and I donâ€™t mean that as an insult, my grognard friends.

Maybe someday a solo wargame designer will come along to topple the king, but for now, John Butterfield is still the undisputed champion of the solitaire gaming world, and heâ€™s in top form with D-Day at Tarawa.