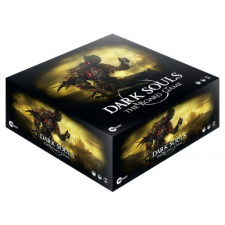 Last year's Kickstarter campaign for Dark Souls was met with much ballyhoo, and for good reason. Bandai Namco's IP is one of the preeminent and most significant video game brands of recent years. It was also a huge financial success for Steamforged Games, who had previously been best known for Guildball. After much hype, speculation, uncertainty, doubts, and the usual spectrum of crowdfunding-inspired emotions, Dark Souls: The Board Game has finally arrived. Speaking as a huge fan of Japanese developer From Software, who brought us these incredible games, the end result is a mixture of surprising conceptual innovation and astonishingly bad design choices that doesn't really feel like it is much of an "end result".

Any Souls fan is going to be lured in by the presentation, which uses the ultra-baroque, uber-gloomy, and slightly surreal visual assets of the video games. The miniatures are good for a Kickstarter production. It looks right, and it's easy to get excited by what you get in the box. You and up to three other players can play as one of four of the classes represented in the games, mostly differentiated by their statistics and a "once per spark" heroic ability. You'll get to do battle with several classic Souls antagonists ranging from the reedy but sometimes shockingly dangerous Hollows to boss partners Smough and Ornstein. A huge treasure deck packs in lots of the weapons and armor you'll remember equipping and you can even visit Andre the blacksmith out by the bonfire. Of course, you will die, drop all of your souls and then have to march back out to retrieve them. 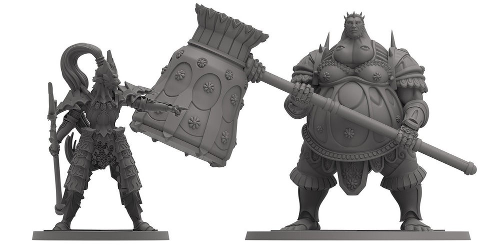 Pictures like this are why I was tempted to pledge big on the Kickstarter last year.

And you will also grind. Excessively. It's a Souls thing, sure, but it is also one of the points where an essential video game mechanic does not translate well to the medium of board games. In an interesting design choice that doesn't quite work, character advancement is strictly a function of the gear you equip, which has statistic requirements. When you earn souls for completing encounters on each tile leading up to the boss battles, you spend them on upgrading stats so that you can equip the more powerful equipment. Just like in the video game, encounters reset when you rest at a bonfire which means that you have to do the fights again. Granted, most of the encounters are fairly brief (especially when you gear up later in the game) but after you've gone through to earn gear and then again two or three times to try to stat up, you're going to get tired of the repetition.

Having to go through and replay encounters is definitely an issue, particularly because it causes the game to run extremely long given its depth and range of gameplay. We're looking at anywhere from three to five hours for a playthrough, which borders on not acceptable. There are already scads of house rules and homebrew fixes online aimed at accelerating the pace and cutting through the redundancy, which is a clear sign that something is not working with the design. The tension in the video game is this incredible risk/reward mechanic that emphasizes player learning and skill development in the way it presents challenge. In the board game, the tension is created by players trying to avoid having to repeat sections of the game. Again.

A typical room tile. Surprisingly, you cannot stupidly fall off the bridge while looking at the inventory menu. Sadly, these are all pretty much the same apart from the placement of the four setup nodes.

Here's the terminal problem. The gear in the game is absolutely essential to success. This is fine, because it is in the video game as well. However, in the video game, the best weapons and armor are not random drops - they are found in specific encounters, dropped by certain bosses, upgraded by the player and generated by sequences of events. In the board game, the concept is much more like Diablo. All of the gear is in a giant treasure deck, which you get a pull from by spending 1 soul. Some of the room tiles have treasure chests, which grant two draws. Either way, the equipment you draw - therefore your potential to increase effectiveness - comes from a random lottery. Most of the souls in the game that you earn will be spent on drawing cards from this deck.

But what if you make 16 souls in a run before you go back to the bonfire, and then spend 16 souls drawing equipment and get nothing useful? It happens. You'll get equipment that your class can't use, that will take many turns to be usable, or that is worse than what you already have. So that 16 soul run was essentially a waste of time, and it may have taken 20-30 minutes of gameplay.

Time isn't the only problem with this atrocious loot system. It also tremendously impacts the difficulty level of the game, which doesn't quite scale up to meet the players' power. Better loot makes the game too easy. But if you don't get that better loot, it can become too difficult. So fixes to the game, such as the designers' suggestion to double souls output and half the number of sparks on the bonfire (thus limiting the resets available), only serve to make it unacceptably easier in exchange for the reduction in length.

There simply is not enough of a game here to warrant its full playtime or to keep players engaged. It is solely combat-focused, which eliminates the environmental and exploratory aspects and of the video game, which is a tremendous loss. The room tiles are practically nondescript and interchangeable- four random rooms do not an Undead Burg make. So you are looking at four or five hours of a game that, other than a few more sophisticated mechanics, is pitched about at the level of Heroquest.

As it exists today, I'm sad to report that I think Dark Souls is a tragedy. I've just spent about 850 words bagging on its length, its messed-up loot system, and the awful decision to try to translate the cycle of death and resurrection to a tabletop game by forcing players to repeat encounters over and over again. What makes it tragic is that there are some quite compelling, innovative ideas at work here.

I especially like how the game feels like a very stripped down, almost minimalized dungeoncrawl. It cuts through a lot of fat and leaves what is- rather ironically- a lean set of smooth-playing rules. Despite the problems, I really like how the statistics impact what you can use, and I love how what you use affects your ability to dodge or block. The stamina system is actually quite brilliant- the more you exert, the more vulnerable you become because when your stamina blocks meet up with your wound blocks- "YOU DIED." 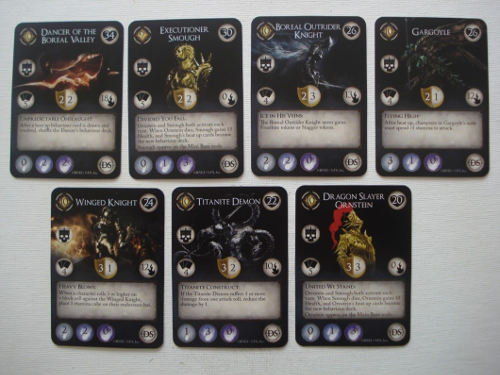 Two main bosses and five mini-bosses that you can mix and match for your long, arduous grind.

The enemy AI is good too- it's very simple stuff where the baddies will move, attack, push, shoot and so forth and this creates some interesting tactical situations. The bosses use an entirely different system where they have behavior decks that occur in a specified sequence so you can actually "learn" what they are going to do. They have attack arcs and weakness zones, which enables the classic "stab it in the ass" tactic straight out of the video game. And when they take a specified amount of damage, the "heat up", meaning they gain a new attack type and shuffle their decks so you might get a nasty surprise. It's similar to Kingdom Death: Monster and it is a great system that can create some awesome boss fights.

To continue the apologia, I think Dark Souls plays much better as a solitaire game with two characters than it does with three or four players at the table. When you are just worried about entertaining yourself and can play faster and looser with the rules as written it's not as hard a pill to swallow that you're looking at a 4 hour gambling game with some tactical combat. I've actually enjoyed my solo outings with it even without the social aspects of cooperation and collusion.

I think it's very telling that most of the fixes and tweaks, including campaign rules included in the rulebook, suggest skipping parts of the game itself. When it comes down to it, this is a poorly put together game that needed some more development time and more critical editorial work done to it before release. Despite its almost redemptive qualities, it toes the limits of what I would consider to be unplayable. But I remain fascinated by it as a critic and observer because it comes across as a failed experiment in adaptation. It strains itself to replicate the Souls concept and in some places manages to get it just right, but in doing so it demonstrates that there is much about the video games that simply do not work in an analog medium.