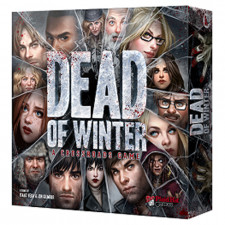 Many thematic games try to ram their ham-fisted narratives down their playersâ€™ throats, but Dead of Winter is that special kind of game that simply provides a framework for playersâ€™ thoughts, plans, and motives to come crashing together. The mechanics and process fade into the background. While it certainly borrows heavily from other cooperative-with-a-traitor games, the design manages to transcend the genre, foregoing the now-stale design choices of its peers to become something else entirely. The real game exists in the space between the rules; it exists as a canvas on which players ca leave their mark.

Hiding its true depth, the core of the system itself is fairly standard: your group will gather resources, fight a growing horde and tackle a different challenge each round. A set of action dice gently guide your turns but youâ€™ll usually find a way to accomplish what you set out to do each round regardless of results. Hidden role cards determine whether youâ€™re working for the group or trying to thwart their efforts, though each one of these also includes a secret, self-centered goal that may put you at odds with the needs of the many at times. Itâ€™s a stroke of brilliance, as it neatly solves the problem of traitor games where any slightly inefficient or questionable choice identifies the traitor instantly.

Much has been made of these hidden roles, as gamers debated whether certain combinations could break the game. To be sure, the game requires players to invest themselves in their characters and buy into the game world--but ultimately itâ€™s a non-issue among players willing to play by the rules. Some claim the traitor has it easy, as heâ€™s just got to lie low and tank the game near the end. Depending on the scenario, player count, and luck, traitors certainly might have an edge, but that only puts the pressure on the other players to quickly identify and cast out any rotten apples.

The group might beg a player to contribute food to the looming crisis, and heâ€™ll reply, â€œYeah, Iâ€™ve got food butâ€¦ you canâ€™t have it.â€ Is he the traitor? Or is he simply another flawed member of the group, who wants to help but, for some unspoken reason, canâ€™t give his all to the collective cause? This paradigm is much more faithful to zombie movie themes that focus on manâ€™s inhumanity to man than other games in the genre that have misappropriated the more lascivious concept of simple-minded undead slaughter. The players are battling the suspect motives of other humans as much as the dead outside the walls.

The gameâ€™s other bit of secret sauce is the Crossroads system, consisting of a deck of cards that trigger on certain player actions (which are often strangely specific). Where the game might have become just another cooperative resource management balancing act, the Crossroads cards create totally plausible situations the characters might find themselves in. Itâ€™s pretty eerie when you send your dog to the police station, and the player monitoring your Crossroads card says, â€œStop! This card reads, â€˜If the player sends Sparky to the police station...â€™â€ Itâ€™s just a play on random events from other games, but the contextual sense it brings to the plot really makes it sing.

In spite of the designâ€™s greatness, thereâ€™s a missed opportunity in the components here, as unimaginative isolated location sideboards fail to create any sense of space or relationship. It can occasionally break the illusion, as it feels like moving a pawn to a random stack of cards instead of travelling down a frigid highway, the dead staring at you from the shadows. The standees are also far too easy to knock down, turning the game into zombie dominoes far too often. While these are minor complaints, itâ€™s all the more painful since the game is so close to perfect.

Be aware the game can last quite a while as well, with even some of the short scenarios breaking the two to three hour mark. Itâ€™s the kind of game you buy not to play just once and then put on the trade block, but instead to play often, with the same group of friends. Itâ€™s a game you plan a game night around and take your time investing yourself into your group and the narrative. It is to be savored, not analyzed and rushed through. If youâ€™re not willing to pay it that kind of attention, it may not be for you.

In the end, Dead of Winterâ€™s design creates a complex illusion, a juggling act that is only possible because, on occasion, the whole thing could cave in on itself. The designers have packed the box full of random events, complex strategies, seemingly unbalanced characters and hidden roles--and yet, bizarrely, the Frankensteinâ€™s monster comes together almost flawlessly. The game ambitiously attempts to create a space where players become the driving force behind the story, and without question, it succeeds.