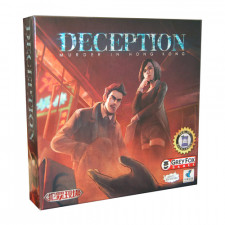 Grey Fox Games is killing it. A year ago almost no one knew who they were and now they've stormed onto the scene with Champions of Midgard and Deception: Murder In Hong Kong, among the most successful worker placement and social deduction games of recent years, respectively. It may be a little early to make this claim, but I'd take Midgard over Lords Of Waterdeep and Deception over Resistance every single time.

This fascinating game was the brain child of Chinese designer Tobey Ho and originally titled CS-Files. It's been revamped for the North American market and the resulting experience is a smooth criminal like Bad-era Michael Jackson. It takes the most interesting aspects of both social deduction and clue interpretation to produce a game that is full of interesting analysis and manipulative skullduggery. You have to work the table while also solving the puzzle and it will certainly test your mettle.

Deception: Murder In Hong Kong has one player taking on the role of a Forensic Scientist and the remainder as Detectives. A murder was committed and the group will work together in unison (or not) to solve the crime and reap the reward. Much like the 2015 smash hits Mysterium and Codenames, the Forensic Scientist player will be directing clues and gentle nods of information towards the rest of the table in an attempt to lead them to water. When everything clicks and you're firing on all cylinders you get that rush and the room is brighter as the light bulb above your head fights back the shadow.

Each detective receives four small sized brown cards that represent possible items of key evidence. They're also dealt four blue implements of violence which could denote the means of murder. These eight cards are face up in front of each player and range from items such as a teddy bear or glue, to razorblades and dismemberment.

Secret roles are dealt out Resistance-style pinning one participant as the Murderer. The Forensic Scientist then has all of the Detectives close their eyes, ushering the evil-doer to awaken. This villain now chooses one blue card and one brown from those in front of them to represent the primary evidentiary elements of the crime. These are the two cards all of the plain Jane Detectives need to identify to end the game.

What's really interesting from the get-go is that the Murderer is given authority in partially determining their fate. The choice of which evidence cards to select is of monumental importance as you will want to select cards that blend in with those in front of the other players. Choosing "receipt" when no one else has any paper or written items in front of them will result in you having a bad day. The goal is to make the coppers job difficult and make 'em sweat for their commendation.

Play then proceeds with the Forensic Scientist communicating solely by placing little slick bullet tokens on cardstock tiles to pick out descriptive phrases that match the key pieces of evidence. These are done from partially randomized tiles which mean the clearest choices are not always obvious or available. So when Ben chooses "A Note" and "Steel Wire" as his two cards and I'm trying to decide what words to pick out on a motive card, do I choose revenge, jealousy, rage?

When discussion at the table starts going down the wrong path you'll combat every instinct to wriggle in your chair; fighting the angst and screaming mental indignation like Michael Scott chastising Tobey - "NO! NO! NOOOOO!" When they hit that moment that they're spot on and then careen off the slide of a cliff it's like being kissed by an exceptional lover just before they break your nose.

Similar to Codenames you must narrow down choices and eliminate options to avoid disaster. Interpreting these forensic clues feels extraordinarily thematic as you're literally evaluating information to piece together a factual analysis of the crime. The "how" may not exactly be a simulation, but the overall mental decision process is bang on and extremely entertaining.

What really edges Deception onto the top shelf is the inclusion of a traitor. Remember one of the Detectives at the table is the person who actually committed the murder, so their actions during play will be entirely based around misdirection. So when Jeremy's pushing hard for Hal's "Razorblade" and "Coat Hanger" is he being sincere or just trying to get everyone to ignore his "Switchblade" and "Dirty Shirt"? It's compelling and at times mind bending as you're balancing logical deduction utilizing imperfect clues while also leaning on social behavior to inform and reinforce your conclusions. Brilliant is perhaps the best way to describe it.

Victory is determined by players correctly guessing both pieces of evidence in front of the Murderer. The Forensic Scientist simply says yes or no and requires both cards be correct for the former. This player also achieves victory with the Detectives so itâ€™s in their best interest to convey information as clearly as possible. The catch with fingering evidence is that each player may only do this once in the entire game. Thus, you have a bit of resource management in when you expend your guess and the ability for the Murderer to offer a fake theory and embellish with dramatic flair as they feign shock is delightful.

The fact that the game relies heavily on player action and gets out of the way is also a selling point, as well as source of frustration. Deception will not ensure the Murderer chose strong evidence nor will it enforce strong play from the Forensic Scientist. This can result in swingy outcomes and perceived imbalance. The game builds a framework for the players to utilize but will not hold their hand or enforce that sense of fun.

What's also interesting is that the game scales very well and can take on up to 12 players. With four or five the game does work, but with a smaller card pool of clues available you're at the mercy of luck and what possible evidence shows up. The game offers difficulty scaling options that don't feel tacked on (increasing/decreasing the number of cards each player receives) and the experience can be tailored perfectly to your desire.

I strongly prefer the game with six or more due to the optional roles of Accomplice and Witness that may be included at increased player counts. These exactly mimic the function of Assassin and Merlin in Resistance: Avalon yet integrate perfectly into this design. The Accomplice wakes up with the Murderer when everyone's eyes are closed and his sole purpose is to misdirect and steer the players incorrectly during the game. The Witness knows who the two black hats are but they don't know which is which or what evidence cards were selected.

If the Detectives manage victory the Murderer and Accomplice reveal themselves and get one final guess at who the Witness is. If they choose the correct player then they off him before the court date and are able to get away with both crimes and secure victory. Just like Merlin in Avalon, this offers an extremely interesting social dance during play as the Witness doesn't want to reveal too much information and needs to be subtle in how they steer the group. I absolutely adore this mechanism and will always use this when playing Deception.

If you can muster at least six and stomach the dramatic reversal of the Witness/Accomplish mechanic, this game is phenomenal. It fosters a tense atmosphere, stirs your conscious, and keeps your mind bouncing with no downtime and constant analysis. This is not a game for sitting back or taking a breather as engagement is the special of the day and you will be ordering seconds.