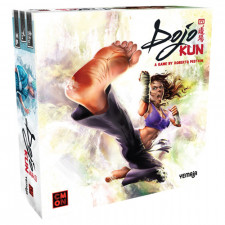 Critical Hits: Nails the competitive narrative of training athletes to prepare for tournaments under the guidance of a wise sensei
Critical Misses: Could stand to go a third round

In the iconic 1984 film, The Karate Kid, one of the many wise sayings of sagely Mr. Miyagi was, â€œNo such thing as bad student, only bad teacher. Teacher say, student do.â€ Dojo Kun puts that sentiment to the test as you run your own martial arts dojo, training athletes in the ways of karate, taekwondo, judo, muay thai or any other self-defense discipline youâ€™d like to imaginatively adopt. Master both art and students and you will win glory in the tournaments. Fail and youâ€™ll be disgraced faster than you can say, â€œWax on, wax off!â€

The endeavor to develop and test your athletes is divided into two training and competition seasons. Training is conducted through standard worker placement in which you, as sensei, and any athletes in your dojo have tokens to claim various spots in your own school or throughout the local village. You start with only one athlete, but as teacher you may acquire others from a drafting row in the village, which provide more tokens to undertake additional actions. Some locations only accommodate one token, while others welcome multiple players. There are also sensei restricted areas and some which only athletes can perform. 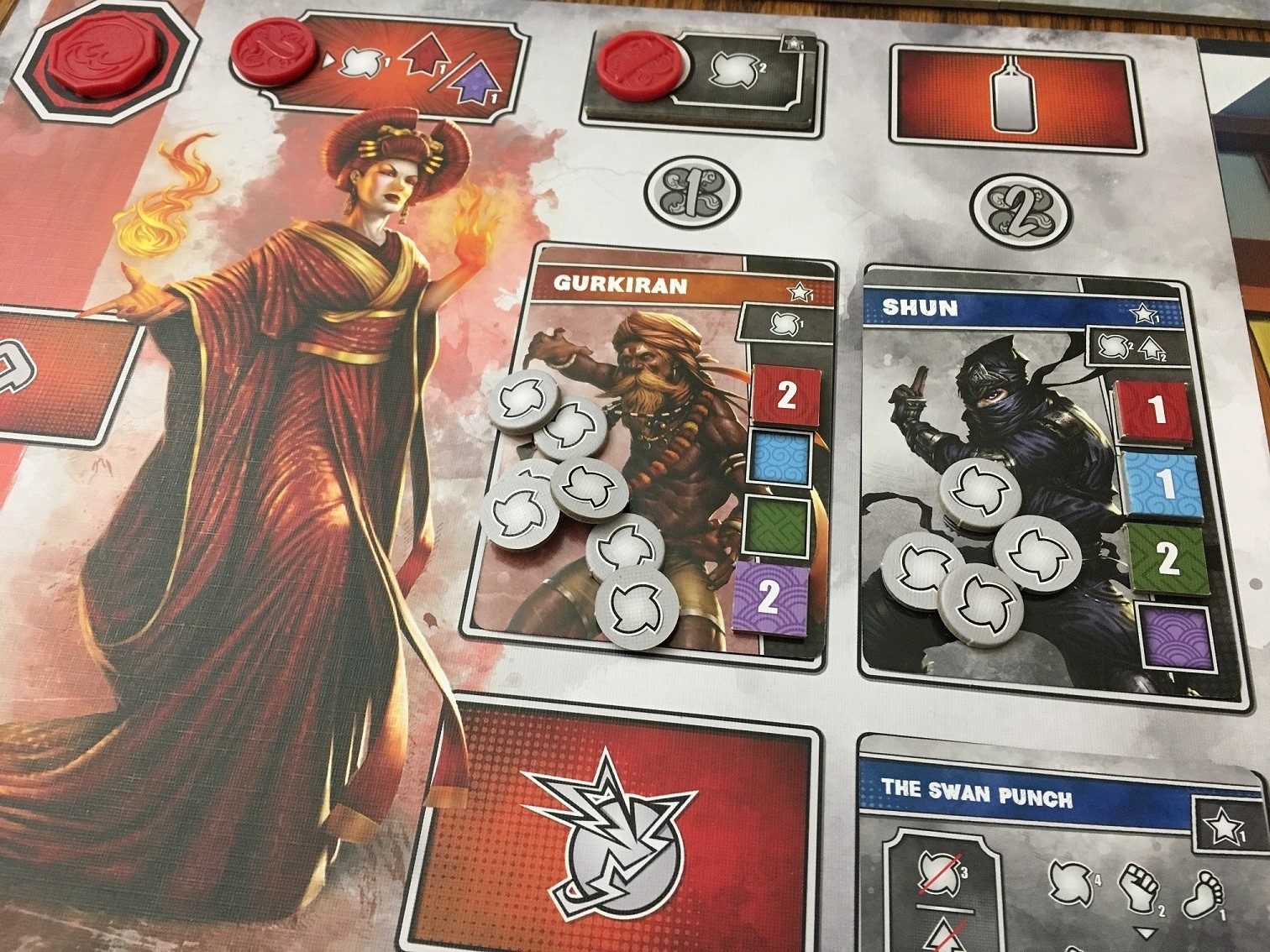 You have three rounds during the training session to prepare students for the tournament - and will very soon wish there was more time! You can develop your dojo, exercise fighters on equipment, teach them secret moves and special techniques, send them on adventurous journeys and instruct them to aid the village. All of these activities level them up in the four different disciplines, nab points and earn ki - the gameâ€™s currency required to learn and perform special moves.

After the third round, whether youâ€™re prepared or not, you enter your best athletes in a round-robin tournament for fame...and victory points. The action ratchets up from its mild-mannered Euro personality to a dice chucking throwdown of flinging bodies, feet and fists. The farther up the bracket your athletes fly, the more renown they heap upon you and your dojo!

Just like the innumerable varieties of martial arts, board games represent a diverse field of particular styles and mechanisms. Dojo Kun masterfully blends two contrasting schools that I believe manages to please proponents of both. Training sessions are planned and orderly affairs. It generates an appropriate amount of tension, thanks to your limited workers contesting premium action spaces. The alternating turns, developing dojos and especially grabbing those victory points gives the design a thorough German game feel. After all, the objective in most modern hobby games is to earn points. Most often, any action becomes a means unto that end but often solely exist for that purpose. Thereâ€™s certainly that characteristic here in Roberto Pestrinâ€™s freshman title.

Indeed the winner in Dojo Kun is still the sensei with the most points. But that masks a grander, more exciting effort - a martial arts tournament. This goal will slide into the wheelhouse of fans partial to American game designs and provides its worker placement aspect with a broader purpose beyond mere points.

The dice-based combat is also quite brilliant and unique - even more so as itâ€™s delicately connected to training. During the worker placement half, the main effort is in training students and leveling them up in the four disciplines. The number and type of dice rolled in a bout depend on the athleteâ€™s experience in these. When fighting, a competitor grabs a number of each colored dice equal to his or her level in the corresponding disciplines, which max out at three. All dice have at least one of the icons relevant to fighting, but each type focuses on either kicks, holds, blocks or hits. When both fighters roll all their dice they count up the number of these icons, modify them with special moves and track them on a nifty tourney board. Then each contestant's kick negates a hold, while holds counter blocks and blocks reduce an opponentâ€™s hits. After this brief accounting the athlete who landed the most punches wins and advances. 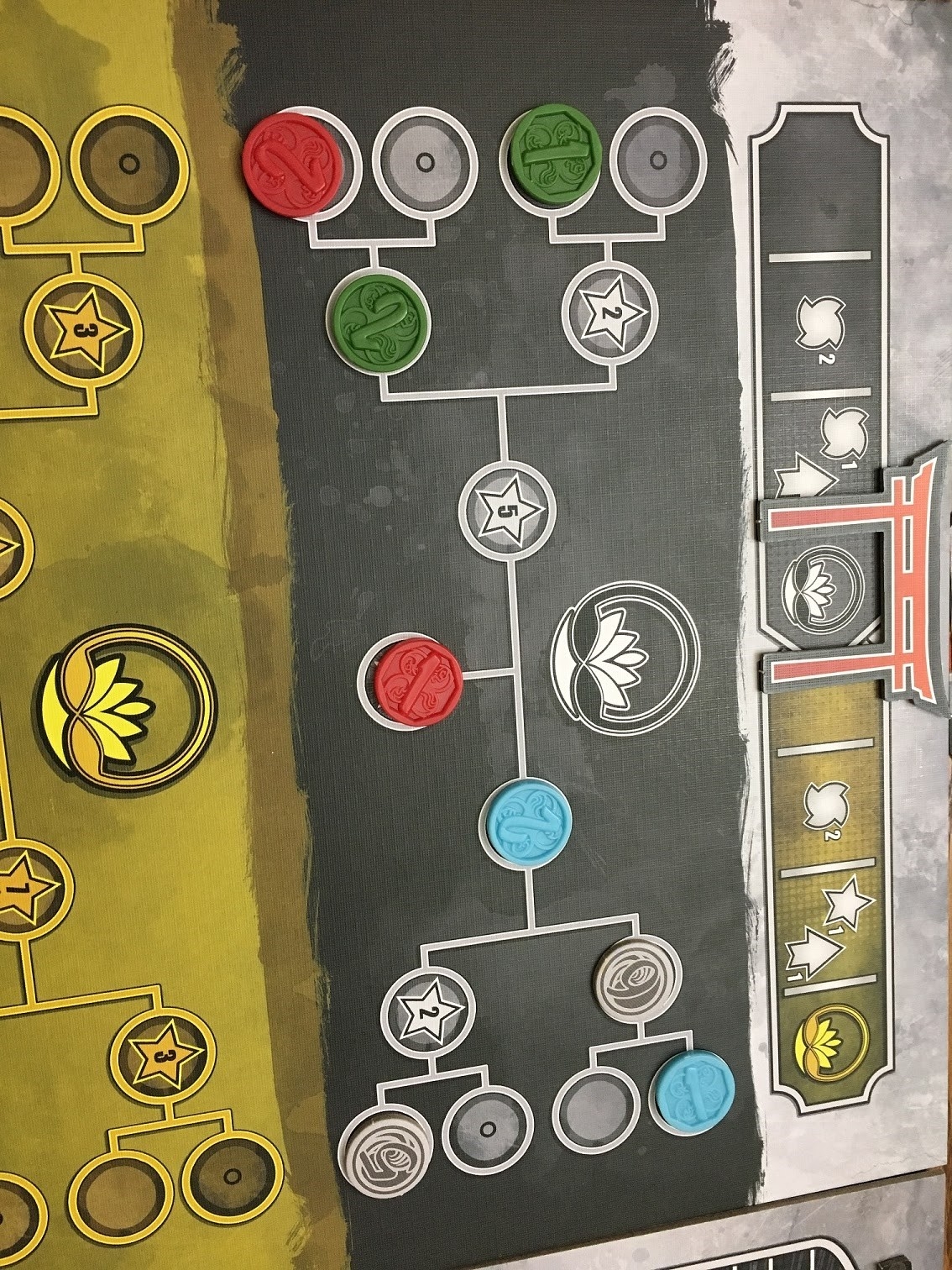 Good luck with this bracket in your office pool!

The game is about testing and competition and that spirit infuses play throughout, not just in the actual tournament. The worker placement training phase offers areas to spar over. You may be thinking ahead about evading and destroying your enemy in one-on-one battle. Yet in the meantime youâ€™ll need to contest spots for the best athletes, equipment, moves, techniques and journeys, in addition to nabbing ki and squeezing out as many points as you can manage. Every one counts. During that process, the strategy integrally plays out through the action, building a story of improving students preparing for advancement - win or lose - under the wise tutelage of their masters.

Dojo Kun may elicit different references in you, but for me it will always evoke The Karate Kid. Just as Mr. Miyagi instructed his young, impatient student, â€œFirst learn stand, then learn fly,â€ this design tremendously captures its training to compete theme. With the tempered and disciplined training sessions used to prepare your â€œworkersâ€ for the tumultuous do-or-die tourney, this martial arts yarn successfully explores and bridges competing styles. A little off the radar and seemingly flying in from nowhere, Dojo Kun is worth checking out for its smart design, careful strategy, potential narrative, exciting dice-chucking and ability to bring different kinds of gamers together.