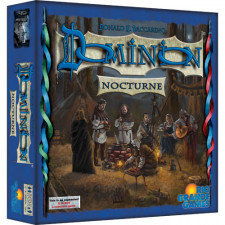 Two sets past the "last set ever," Dominion: Nocturne is here to remind you that the OG deck builder isnâ€™t going anywhere and it doesnâ€™t care that your storage solution is bursting at the seams.

No game is complete without the obligatory zombie expansion.

As evident by the name, Nocturne is all about things that go bump in the night. This set consists of PG-friendly horror tropes whose effects trigger during a new phase of the game. After your standard action and buy phases, you now have the option to play any Night cards during the aptly-named Night phase. There are no limits to the number of cards you can play during this phase, which allows your inner mega-combo-maniac to go wild.

These night cards are downright cool. The Monastery allows you to trash a copper from your hand or in play for each card youâ€™ve gained that turn. For a cheap 2-money cost, you can guarantee everyone is getting in line to become a monk. The Night Watchman allows you to look at the top 5 cards of your deck and discard any that you want, then returning the rest in any order. This is insane given he only costs 3 money to purchase and is gained to your hand instead of discard pile. And then thereâ€™s the Vampire. Not only does this not-so-sparkly foe give other players a Hex (which Iâ€™ll explain later) while gaining you a card costing up to 5, it also transforms into a Bat, which will get transformed back into a Vampire after use. I wonâ€™t cover all of the night cards, but suffice it to say that the others are just as exciting. Some are even duration cards that will trigger on your next turn.

More happening than my usual nights.

While at first glance these cards may appear pretty powerful, keep in mind that you are sacrificing spending money during your buy phase in order to acquire them in the night phase. The normal, non-night cards are just as enticing and useful. The Faithful Hound gives you +2 cards, but also comes back to your hand if itâ€™s discarded outside of the clean-up phase. Thereâ€™s also the Bard who provides you +2 monies and gives you a Boon. Boons and Hexes, indicated by cards with Fate or Doom on them respectively, are Nocturneâ€™s yin and yang. Boons give you good things like additional buys, cards, or money. Hexes, on the other hand, make you discard, trash cards, gain curses, or even acquire states. 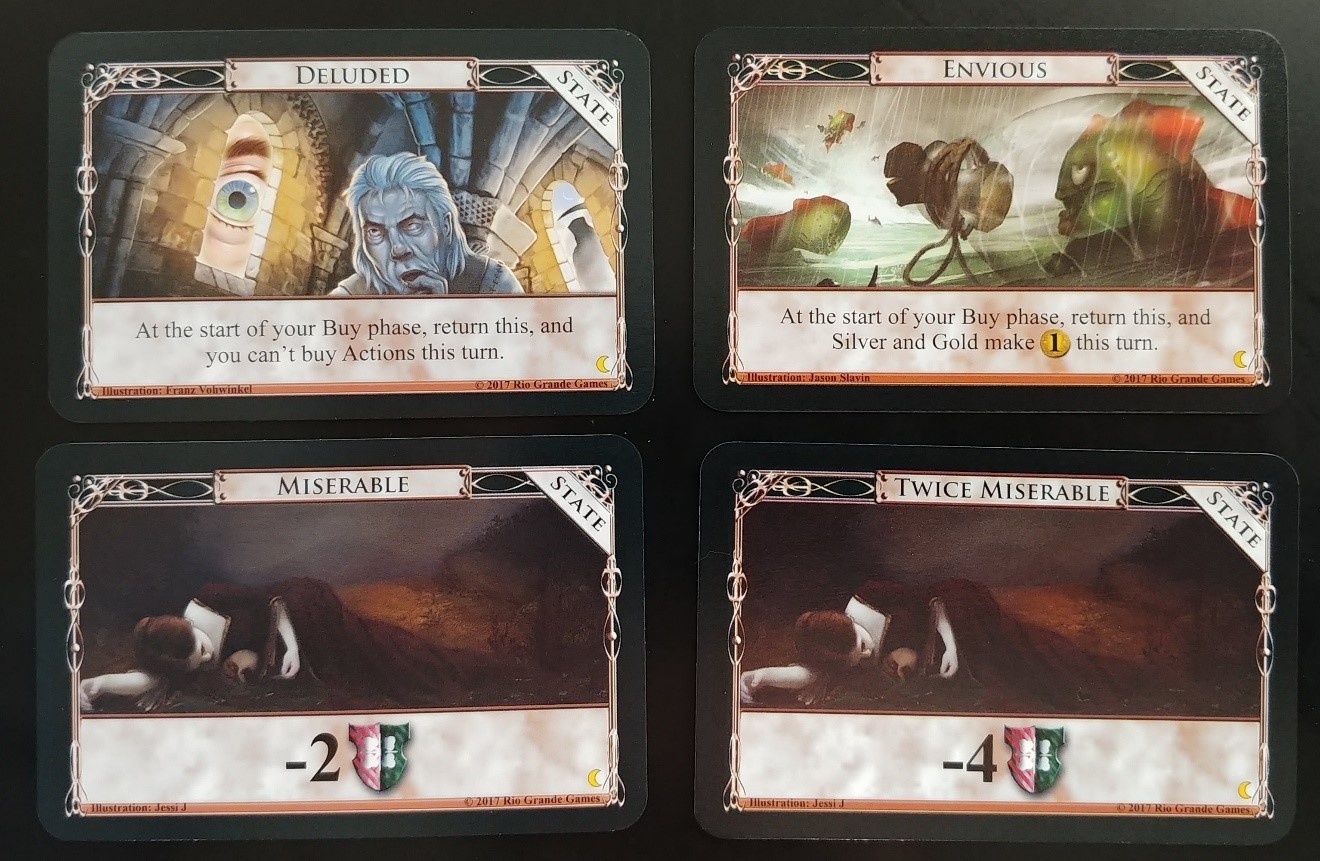 As though two additional piles of cards werenâ€™t enough, states are a separate stack of cards that usually limit something you can do on your next turn or simply cost you victory points at the end of the game. States like Deluded or Envious are a nuisance whereas becoming Miserable feels far more punishing. Since the Hex deck is random, itâ€™s a roll of the metaphorical dice as to what will happen to you. Though not infuriating, itâ€™s hard to avoid Hexes given how many cards deal with them in some way. For players who like to avoid conflict in their games of Dominion by blacklisting certain cards, this may be more difficult to do in Nocturne. Like the Hex deck, Boons are also random but, of course, feel far better. At worst, you get something completely useless and at best, you get a turn cincher. Still, neither Boons nor Hexes will turn the tide of a game any more than the right draw from your deck at the right time does.

The last bit of stuffing inside Nocturne are the heirloom cards. Several kingdom cards have their normal effect in-game, but provide an heirloom that replaces a copper in playersâ€™ starting decks at the beginning of the game. When playing with the Tracker, for instance, players receive a Pouch that provides +1 money and +1 buy. Though the Pixie is a decent enough card on its own, it comes with my favorite heirloom, the Goat. It also provides 1 money but allows you to trash a card from your hand when played. Like many Dominion cards, itâ€™s an amusingly thematic card for a game that is brazenly mechanics-forward. 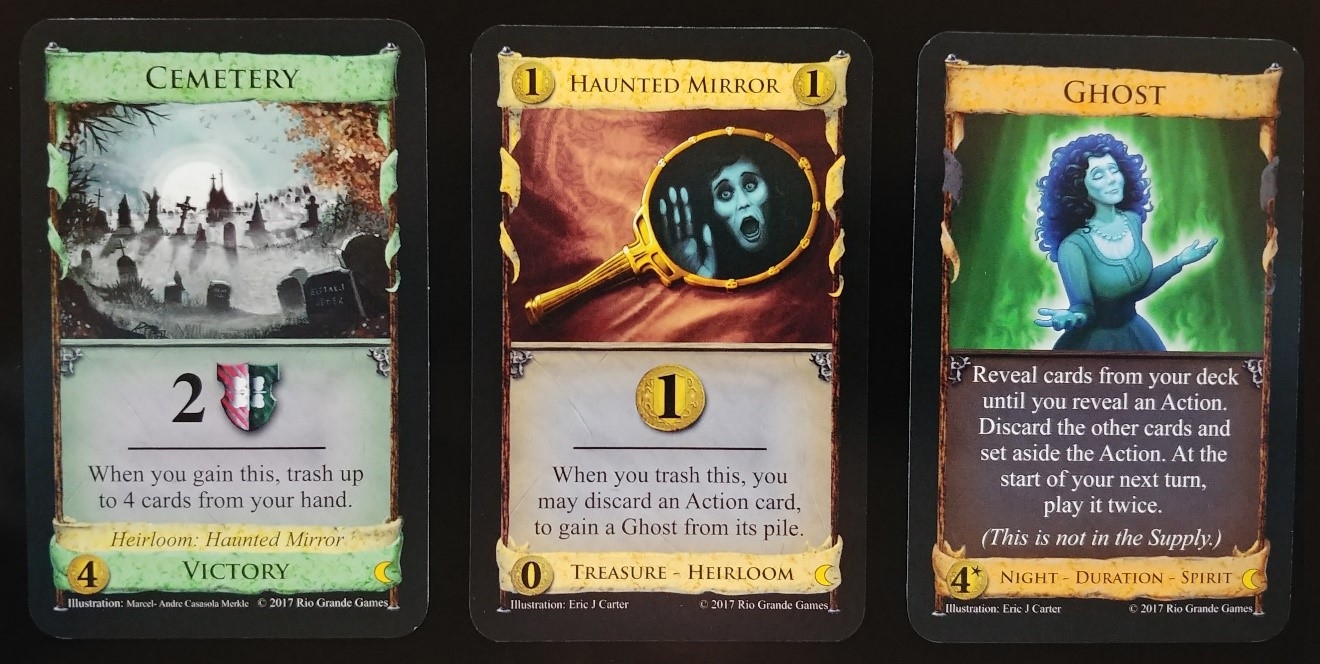 This is why you shouldnâ€™t pick things up in cemeteries.

Following the trend of previous sets, Nocturne certainly adds more complexity to the game with an extra burden during setup. In addition to the 10 kingdom card piles, you also have to lay out Boons, Hexes, States, Heirlooms, and Spirits (acquired via other card effects). However, for veteran Dominion players, the discovering of new interactions among these cards are well worth the overhead. Youâ€™ll never like every card in every set, but as a whole, this is easily one of the more memorable releases. I know expansion fatigue is real, but Nocturne is one that you donâ€™t want to sleep through.