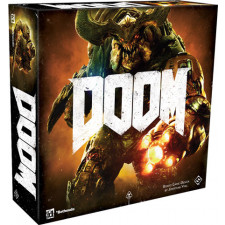 DOOM: The Board Game Review

MB: DOOM. It's in all caps for a reason, brother. This game is totally bad ass, and of the recent crop of great guys on a grid games I actually think this is the best of the lot. This is a lean, mean shoot-'em-up that manages to capture the fast action and extreme action of this storied video game franchise. I'm also surprised that I like it as much as I do because in the past I've not cared for the "Overlord" style, all-against-one format. But I think the recent examples of this kind of game (such as Conan and TMNT) have really innovated and improved the concept. For example, if you are the demon player in this game, you can actually cut loose and play to kill without feeling like you are simply prolonging the game or ruining everyone's fun.

CT: This is a great game, totally agree. I do see that pattern emerging of designers giving some TLC to the overlord player and not just expecting them to orchestrate enjoyment for others. This is certainly a tense, head to head affair with a group of marines going all out at high octane to face smash a bunch of demons. Speed is the key element of Doom, and I dig it.

MB: Yeah, it is all about constant movement and impact. There is never a sense that you are stuck in an area, trying for an hour to get to a door (see: Descent). As the marines, you are constantly strafing, shooting, getting mobbed, blasting out of dangerous situations and respawning. As the Demon player, you are always putting new demons out, activating powers, cutting off teams and looking at spending your Argent points smartly to buff units. It's like a shark, always in motion and out for blood.

But I think the one thing that really makes this game MOVE is the Glory Kill mechanic. This is a brilliant implementation of something from the most recent video game. In it, if you do enough damage to a demon it becomes staggered. Then, you can run up and do a gory finishing move sort of thing on them. This keeps the player constantly in the middle of the action, never on the peripheral. Likewise, the board game continually incentivizes running right up to monsters- even if you are loaded out with longer range weapons- and smashing their skulls. If you've done a certain amount of damage, you only have to move onto the square with the demon and you immediately frag them. No rolls, no uncertainty. You get a bonus ability card as a reward for doing this. But more importantly, this also has the subtle effect of keeping the demon situation constantly in flux. There are never times when there are 4-5 demons on the board with low health. You don't have to spend another shooting action to off a demon with only 1 or 2 health remaining. You just run up on them, which often means charging right into the fray. 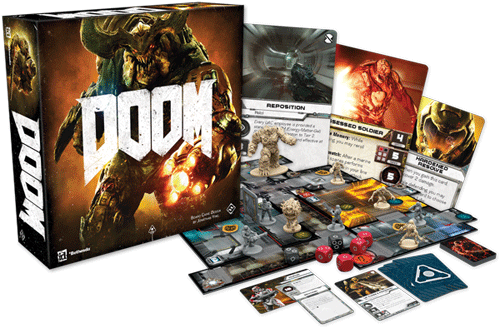 Yeah, of course it's packed with a bunch of good-looking stuff.

CT: The Glory Kill mechanic is phenomenal. In combination with custom player decks based on weapon loadouts--deckbuilding with actual teethâ€”it gives the game its sense of motion. The way weapons have a specific feel in terms of your sphere of influence and agility just feels so apropos to a first person shooter. Its closest comparison is probably Adrenaline, the recent CGE release, but Doom packs in a little more ferocity and grit.

Itâ€™s really odd how close this looks to the Doom family tree, as if itâ€™s an evolution of Imperial Assault, yet it feels very different. It stands out and somehow manages to not feel like a rehash or patch job. Doom is its own thing with its own distinct personality.

MB: Oh, the loadouts. What a great concept. I love how you add cards to your deck when you pick up a weapon, but even more interesting is how the weapons actually change your tactics- and it's not just in a melee versus ranged way. I really did not expect this design to have such a strong sense of specialization and variety in the combat. You know, at first I thought that it was sort of iffy that you generally only have three of your weapon cards in your hand at a time because it seemed like that the restriction was limiting choices. But then I realized that when I'm playing Doom, I'm not carefully considering a broad range of if-then possibilities or triaging decisions. I'm making snap decisions on the fly. I may not make the "best" decision every time, and I may not always have many decisions to choose from. What I'm getting at here is that Doom manages to capture a sense of "twitch" gameplay. And that's something else I didn't expect from this design. Mainly because of what I expected from the previous FFG take on Doom.

I almost look at this year's model as a reboot of the original system...but more than that, I actually think that it should bury its predecessor's entire lineage. Wish that FFG had held off on Imperial Assault until after this new Doom!

CT: So weâ€™re both clearly huge fans. There are a couple of minor blemishes that keep this one from edging out other recent titles and earning that final star from me. The first is that the game can take quite a long time, suffering from repetition slightly if it does go long. Most of the time it keeps moving and the pace is frantic, but when a scenario stretches out to two hours you can start to feel it.

MB: That is kind of the weird dissonance with Doom. It has the turn to turn pace locked down. But the overall game can run long, for sure. I do find that it plays long - too long, even. I've found myself wishing it was as much as an hour shorter. And it can feel a little grind-y, mainly because as it goes on that sense of repetition.

CT: Iâ€™m also not sure Iâ€™m fully sold on the scaling. There was a great effort here to make marine play work with any number, but with a marine or two it really feels like the balance is shifted too far to the good guys. It also gets very swingy at this count due to several actions occurring in a row, as itâ€™s not too uncommon for the Mr. Alpha or Delta to get four actions in a row if their card is drawn consecutively.

MB: Another valid issue, but I think this one is easy to fix. Just play with four marines every game, and have players handle more than one if need be. I didn't really care for the scaling fixes from the first game because it is clearly designed for a full table so this has become our de facto way to play.

I have to say that my biggest problem though is the #%!?%# puzzle tiles. I hate them. At least Doom has fewer than most games of this type.

CT: Yeah good point about the puzzle connectors. Iâ€™m not a huge fan either, as they get frayed easily and you have to really work to get them to sit smoothly connected.

Besides the tiles, the rest of the production job is stellar. That shouldnâ€™t really be a surprise at this point because itâ€™s FFG, but damn those minis are nice. The combination of tan color and deeper recessed detail work makes this set of miniatures the best Fantasy Flight has released thus far.

MB: Over the past year I've been getting back into "real" miniature games (read: Warhammer) so I've become a serious minis snob. Board game minis usually don't cut it for me anymore. But these figures are great. 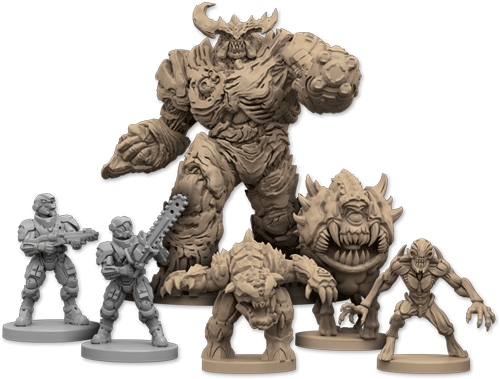 This ain't the Getalong Gang.

CT: The art production job here is on the money as well. I love the graphic design as a whole, and am enamored with the stark contrasting silhouettes on the manuals.

MB: YES, those manuals. That is the difference that professional, on trend product and graphic design makes. I saw those and I thought "this is going to be good".

Good looks and great gameplay aside, another thing I really love about Doom is that it feels very much like a complete package. There's a sense that this game is self-contained. It doesn't feel like a flagship for a product line, it doesn't feel like it is putting you on the mill for endless add-on purchases. I especially appreciate that in an industry where even the expansions have expansions.

CT: Absolutely, this is a game thatâ€™s not waiting to meet its potentialâ€”itâ€™s already there. From cover to cover the effort and vision is there and getting to the meat requires trivial effort. I think we are both really pleased with the feel of this game as a product, as well as a piece of game design.