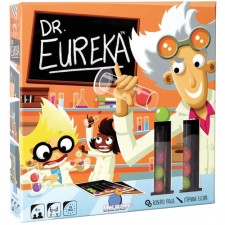 Dr. Eureka is a kidâ€™s game marketing itself to children eight and up. But that target age is likely very conservative and it should be playable with slightly younger children. Five or six is probably when kids can grasp the concepts. But unlike many childrenâ€™s games that are really quite awful to play as an adult, this one is surprisingly solid. Iâ€™m not saying youâ€™ll want to bring your hobby friends over and gather around. But if you have kids in the right age range, theyâ€™ll enjoy it, youâ€™ll enjoy it, and it will foster a great time for everyone.

The game comes with three test tubes per player and six little balls in three colors. Each player starts with two of the same color in each tube. Then, a card is flipped over. The card shows three tubes with the balls in particular combinations. One might show red on green, another green on purple, and the final purple on red. Or maybe one might have four balls in it, another two, and the final one empty.

The players then hurriedly try to match the depicted configuration. To do so, they simply poor balls from one test tube to another until they get it right. There can be no spilling, and no simply removing balls by hand and placing them â€“ much to my five-year-oldâ€™s chagrin at first. The quickest player to get it right wins the round.

For an adult, the game is still fun. You have to quickly manipulate the test tubes and it certainly gives you the feeling of being a mad scientist as you poor chemicals from one place to another. For an adult, the correct sequence to get the desired result is not so hard to grasp, so it basically comes down to speed and dexterity. 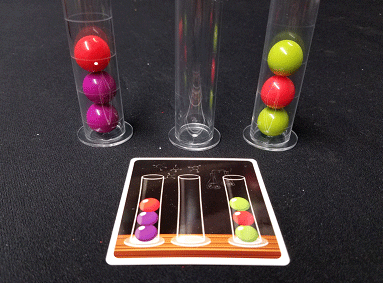 For kids, though, the game can be brain burning. Itâ€™s not always easy for the target audience (grade-schoolers) to see enough moves in advance. The card shows two tubes each with purple on top of green. But the purple tube has purple on the bottom. What gives?

However, through repeat play and familiarity they begin to understand how to move the balls around. Vitally important is the notion that when mixing two tubes, you can use the third as a repository. The challenge is real for the little ones, and so is their pride at accomplishing it.

There is even a variant that tends to even the playing field between adult and child. Adults have to hold all three test tubes in their hand â€“ without spilling anything â€“ and may only set them down when they complete the puzzle. Pro Tip: that dexterity challenge shouldnâ€™t be taken lightly. Itâ€™s easy to accidentally spill, and be disqualified, when youâ€™re juggling three tubes in two hands.

It has a separate variant where you try to bid on how few moves you think are needed to accomplish the objective. But, frankly, it strips away a lot of the engaging fun that racing against everyone else provides.

Dr. Eureka reminds me a lot of Uluru (now called Pelican Cove). Itâ€™s essentially a logic puzzle where you try to get your personal setup to match the depiction. Sure, the good doctor slows things down a bit to make it child accessible. But you get the same kind of deduction feeling. And thatâ€™s a great skill for children to learn.

Childrenâ€™s games are great because they teach turn taking, being a good sport, and all sorts of other good qualities. But itâ€™s uncommon for a game to also train your child how to think logically â€“ and to think in sequence. And thatâ€™s especially true at the age Dr. Eureka targets. Games engaging this skill usually target kids thirteen and up. This one goes as low as five or six and manages to strongly succeed.

As an adult, probably 80% of your enjoyment will come from playing it with your kids. Thereâ€™s something special about that. But unlike those abysmal mass market games, Dr. Eureka can be enjoyed by adults. Itâ€™s fun to work through the little puzzles. Sure itâ€™s light. But the dexterity involved means it keeps your attention and you get to see it captivate your kids.

If youâ€™re looking to show your kids how fun board games can be, Dr. Eureka is a good one to use. Itâ€™s interactive, simple to grasp, engages both the mind and the hands, and stresses logical thinking. And for all those reasons, it also makes a great birthday gift for nieces and nephews.