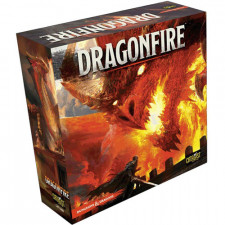 I didn't come into this review of Catalyst Game Labs' Dragonfire with high expectations. Last year I went through a brief fling with this design's original iteration, Shadowrun: Crossfire. I kind of liked that game despite my general distaste for the Shadowrun setting, but it was also a somewhat over-complicated and quite unstable cooperative deckbuilding adventure game with legacy elements that never seemed to gel in the way I think the designers intended. It was one of those games where you couldn't help but think that you could be playing something better the whole time you were playing it. 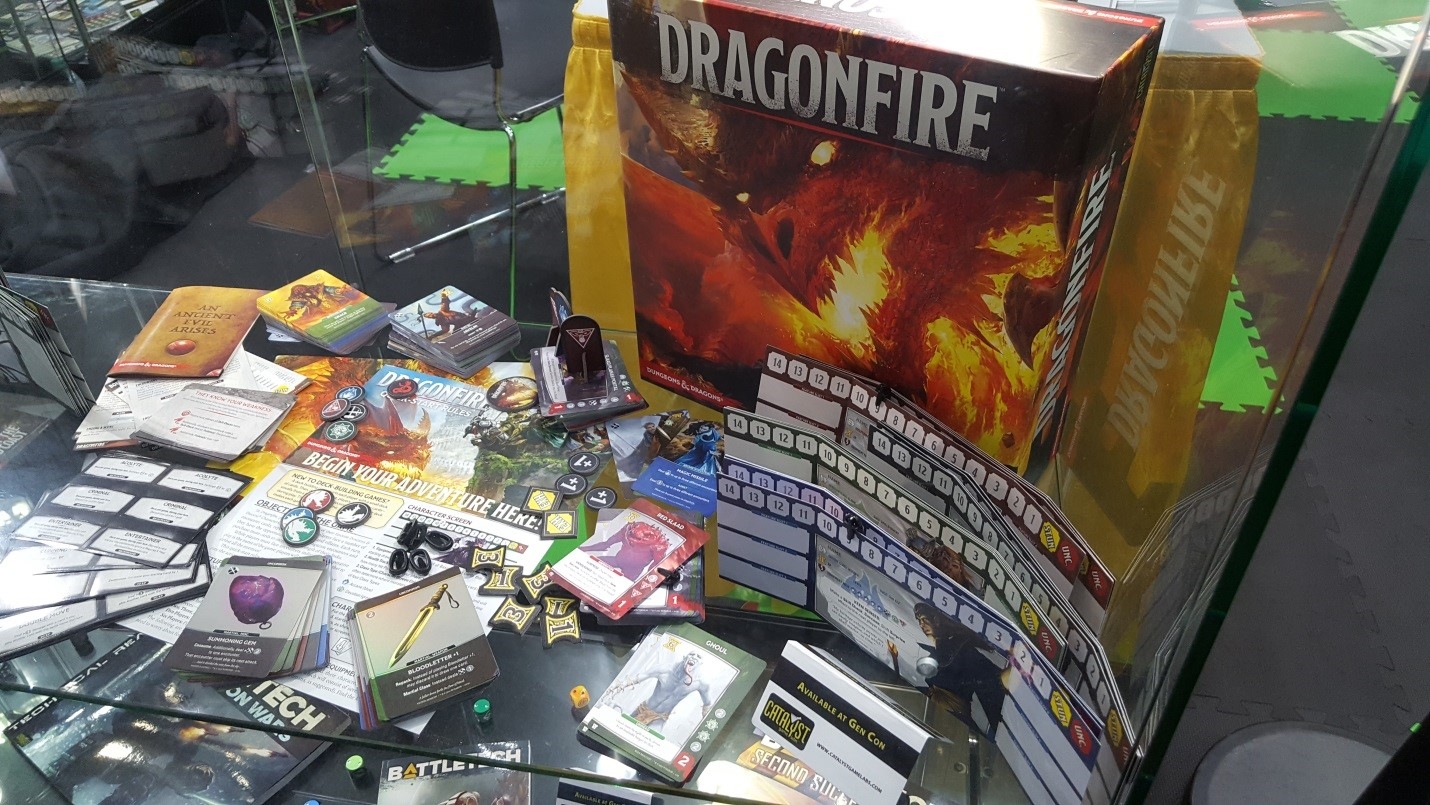 Comes with everything you see here. Except the Battletech stuff.

Dragonfire is that better game, but surprisingly, not really all that much has changed on the surface beside the obvious shift in setting. It's still a design where each player takes a character of a specific race and class and their seed deck of basic cards effectively describes their specialization (Arcane, Devotion, Martial, Deception). These suits also carry over to encounters, which are generally monsters and locations that emerge over the course of an adventure. When the Displacer Beasts, Grells, Gnolls, and Gelatinous Cubes (YES) show up, they present a set of icons on their card that indicate what suit of damage is needed at each level before they are killed. So a red creature may need to be fought with a card that generates a deception icon, and then three of any and then maybe another suit. And since it is co-op, players may attack any monsters facing their friends or play out-of-turn assists to try to move those damage sliders up before the monsters attack and deal damage- at least, if you are in the same location as your buddies. When a monster is slain, there's a gold reward that the party divides up equally.

And of course, you use that money to buy more advanced and effective cards from a display. There aren't a great number of different cards in the game but what there is allows for some compelling decisions. Do you want your Martial-specializing fighter to take a couple of Deception cards, or focus solely on generating those Martial icons for the party? But then there are some cards that have a special benefit for some classes or are restricted from dual-classing altogether. And others require that you purchase a card of one type before you can buy it. 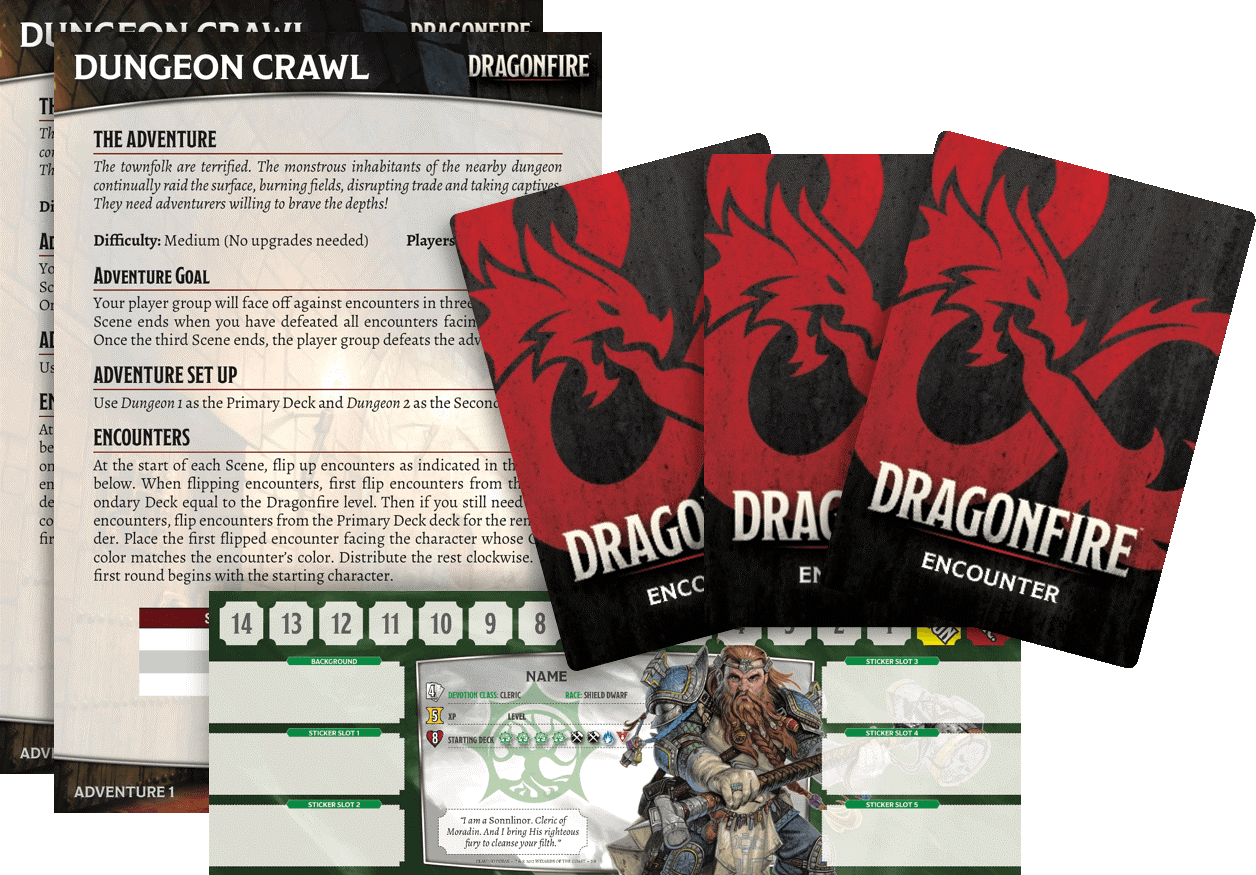 The illustrations and graphic design are top-notch across the board.

This is the general flow of the game, but it is also a scenario-based affair. Each scenario- which can and should be played as a linked campaign- occurs in scenes. In order to advance the scene and acquire XPs, you just have to clear the encounters and any token monsters that they generated or anything else that popped up as a result of the Dragonfire event cards that pop up over the course of it. There is something of a built-in timer in those event cards as one is drawn each turn and that increases the Dragonfire level, which makes some cards in the game more powerful. So your party needs to keep it moving or else the game gradually ramps up the difficulty. And it can get pretty tough- much like Shadowrun: Crossfire, it isn't quite balanced in terms of challenge and with the wrong cards in hand, in the encounters, and turning up in the Dragonfire phase the game can suddenly veer toward impossible. The fix for that isn't really a great one, the idea is that you can replay failed scenarios (read: grind) to earn XPs to level up and come back to them stronger. That said I really like that you can choose modifiers, almost like those skulls in Halo, to make a scenario more challenging in exchange for greater XP rewards.

The RPG-like levelling mechanics are fun. You start out a character with a background feature that gives them a special ability and over the course of a campaign you spend XPs to unlock additional feature slots. So growth is expressed in these advantages and there a lot of options as to how to develop your character. This is all handled by putting stickers on the character screens, which is likely to offend some folks who are worried about their precious game components but it is also recommended that you write on them as well. Don't be scared. It's actually worth it to track everything easily and sold-separately character packs will have plenty more cards and stickers if you decide that your group is going to play Dragonfire for the next decade.

And there are also magic items as part of the progression system- these come from a deck of lovely foil (!) cards and they become permanent additions to your starting deck. At the end of a scenario, there may be a reward of a pull from the magic item deck, which is subdivided into common, uncommon and rare treasures. Getting a hold of and attuning this loot is loads of fun and they can give your characters some great advantages, including "always on" powers- at least until a monster with Dispel Magic shows up. 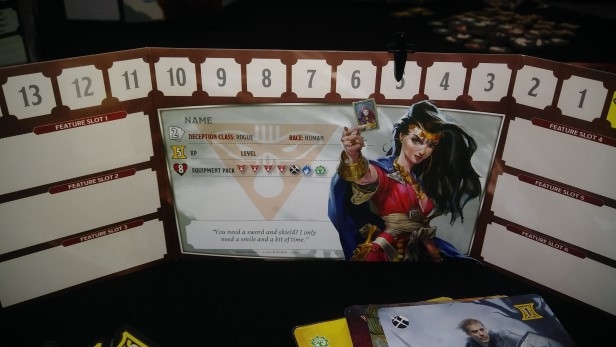 DM screens for every player!

If it isn't already apparent, Dragonfire is naturally a more complicated deckbuilder than something like Ascension or Legendary. You are looking at a 32 page rulebook and an 8 page quick start guide, along with a small scenario booklet and setup cards for each scenarios. I don't feel like it is any more complex than the Pathfinder or Warhammer Quest Adventure Card Games, but I do feel that the depth and potential for gameplay is greater here. It also feels quite different than most deckbuilding games because it isn't so much about getting better or more efficient at generating values for purchasing or eliminating cards. It's much more about looking at the monsters on the board facing down a player with low HP and figuring out how you can kill them before they stun or KO that character. This might mean buying assist cards (that go into hand, not discard), working out how the next player can skip the damage level progression with a card they have, or moving the monster to another player. It's all very tactical and puzzle-y in the best way. You get a sense of fighting to keep the party's head above water and moving forward before the Dragonfire level gets too high, which creates some nice tension.

I think this game, due to the card and content writing, simply plays better and more smoothly than Shadowrun: Crossfire did. You could almost look at that game as something of a beta for Dragonfire, and I cannot imagine that anyone interested in this Crossfire system (as they are calling it) would want to go back to the original game. Unless, of course, someone just loves Shadowrun. For my part, I am much more interested in the classic D&D setting, and I especially like that this is a Forgotten Realms game set in The Sword Coast. So that means that you are in the vicinity of Waterdeep and Baldur's Gate. It's true that this is fundamentally a deckbuilder where matching suits takes priority over narrative and storytelling, but I love that this all feels like good old fashioned D&D.