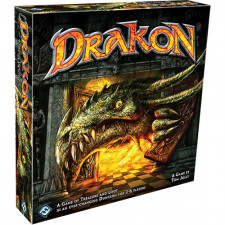 Tom Jolly’s Drakon has been around the block, and I’ve been around the block with it. It was first released way back in 2001, back when Fantasy Flight Games had not really hit their stride and was still sort of feeling out how to do hybrid games blending European mechanical simplicity with the American priorities of setting and conflict. The recent reissue of the game is the fourth edition and it is the third time that I’ve owned this silly little tile-layer. It will likely be the last, because I think I’ve finally come to terms with the fact that it struggles to make a case for itself. Particularly now during a time when simple, fun-first fantasy dungeon crawlers are a dime a dozen. And among those numbers are currently in print, best-in-class titles such as DungeonQuest and Jolly’s own Wiz-War.

When Drakon first released 14 years ago, tile-laying was all the rage. Klaus Jurgen-Wrede had recently won the Spiel Des Jahres for the classic Carcassonne, and everyone was excited about anything where you built a map through dominoes-style gameplay. Drakon was definitely on trend for its time, but it was also on trend for a Tom Jolly game in any era. He is an old school American hobby designer, so of course there had to be a genre setting and some take-that to spice it up. But he kept it very simple, very direct and very accessible. And short. These would be the game’s best qualities.

Each player takes a hero figure and a handful of dungeon tiles. Kicking off the adventure from an entrance tile, each player gets a choice to either place a tile- thus expanding the dungeon- or to move one space into a previously placed tile following arrows that regulate egress from tile to tile. Most of the squares have special effects that occur when a player steps on to them, the most important of which is to steal a gold coin from Drakon, the titular dragon. The coins are valued at one, two or three and the goal is to nick ten points worth of treasure.

Of course, it’s not as easy as all of that because many tiles do rude things like steal gold from other players or move dungeon tiles around. Or destroy them outright. There is a magic lyre that lures (forces) players to spend their move checking it out. And then there is the Drakon tile, which moves the dragon around in the dungeon. If he lands on your hero, you lose a gold coin and go back to the start. There is no elimination or player death – just inconvenience.

There are quite a few room effects that require an aid sheet to decipher, but there are few exceptions or conflicts that tend to arise between them. You can put this game on the table and be playing with a table of complete newbies within five minutes. There is virtually no setup- no cards to shuffle, no tokens to sort out, no board to populate. You put out the heroes, hand everybody four tiles and go. There are also hero powers available for those that want one more razor-thin layer of depth. These are once-per-game powers that add very little to the game. Yet you don’t want to leave them out because then Drakon feels even more barren. Protip- don’t pick the Fighter, his power sucks.

It’s all about as cut-and-dried as it gets, but there are some twists to consider. One is the “place or move” mechanic. This means that you can’t really just lay out a gold tile next to your figure’s position intending to move onto it next turn. By the time it gets back to your turn, everyone on your tile will have also gone there to take a coin. And it isn’t necessarily zero sum- you’ll probably draw a one value coin while the others draw twos or threes. Deciding when to play tile, where to play it and then when to make a move are the key decision points.

There is at least some sense of planning involved. What tends to happen is that a couple of “routes” develop where players are hitting gold rooms and other effects regularly and then other players do things to either cash in on the money train or to crash it. Once the dragon is out, he tends to just start hitting everybody as all players use his room to wreak havoc.

Along with the dragon room, the tile effects are fun and add just a little complexity. Dropping a tile that lets you put your figure directly on it to escape, say, a rampaging dragon is always a good time. Teleporting yourself into a milk run sequence of lucrative tiles that others have set up is satisfying. And nabbing a coin from the purse of an opponent one point away from winning is always priceless.

This is definitely the kind of game where stopping another player from winning turns out to be a consistent last act strategy. And of course, if you’ve played these kinds of games you’ll know that the winner is usually the player that manages to squeak through the gauntlet of potential losers. That’s not really a big issue when the game runs 30 minutes. But it can be when an extra 15 or 20 minutes of endgame is added.

It’s a decent, brain-dead way to spend half an hour with four, but with five or six it starts to wear out its welcome. This is unfortunate because Drakon is the kind of game that you’d expect to be really good with five or six. With that said it is definitely a better game with five or six beers, and the design kindly steps out of the way so that you can make jokes, have conversations and check your phone.

I won’t deny it. There is a certain moronic charm to Drakon. It’s like watching a Z-grade fantasy movie. You know it’s not really any good, but it’s an easy and mindless way to get your genre jollies. But what does that say when a game’s most notable assets are that it’s easy and mindless?