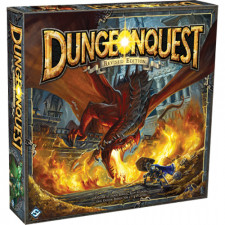 Dungeonquest is a great game, but not for the usual reasons. The players rarely have much control, and it usually ends without a winner. It has player elimination, sometimes as early as the first turn. To a lot of gamers it will look stupid and random, and it is both of those things. But itâ€™s also probably the richest joke in board gaming. Itâ€™s a pie in the face not only to fantasy board games, but to the entire narrative of the mighty hero.

The players are all adventurers who seek to plunder a dungeon guarded by a sleeping dragon. Each turn you draw a tile to move closer to the center and the dragonâ€™s hoard. The problem is that each tile presents its own challenge. Usually youâ€™ll have to draw a card, but some are printed directly on the tile. This dungeon is fraught with peril, filled with bottomless pit, swinging blade traps, monsters, and treasures.

These encounters all are resolved with a dice roll against a character stat, where you donâ€™t so much succeed as much as you fail to varying degrees. Almost everything chips away at your life if it doesnâ€™t outright kill you. And of course, thereâ€™s no coming back from death. Itâ€™s literally game over. Even when you donâ€™t take damage, the tile draws are brainless and cruel. As often as not they create closed loops that never actually lead to the central treasure chamber or are inescapable. The winner is theoretically the person who gets out with the most treasure, but in practice most games end with every adventurer dead, meaning no one wins. Just to be sure, if people survive without winning long enough, the dungeon collapses and kills everyone anyway.

Obviously this game will drive some people crazy. The very idea that the game will typically end with no winner is a violation to many people. I mean, why bother with a game where you might fall into a bottomless pit on the first turn? But against all logic, Dungeonquest works, and it works well. Part of that is because itâ€™s a snappy experience. Turns are quick, and the whole game is over in about 45 minutes. Even when you are eliminated, itâ€™s fun to stick around and see how everyone else will die.

More than that, Dungeonquest commits to its absurdity. By creating an environment where survival is a happy accident, the point is less â€œwho will winâ€ and more â€œhow will everyone die.â€ Of course people make it out sometimes (if they do I recommend you let them sign the box), but itâ€™s never on purpose, just a happy accident. Itâ€™s like the joke that starts as amusing, becomes annoying, then circles back around to hilarious. When the game creates a sealed loop from which a player cannot escape, you can almost hear the rimshot.

It also plays as an elaborate goof on the whole idea of heroic fantasy. Fantasy hinges on the idea of the chosen one, the hero who succeeds where others have failed. Fantasy board games often revolve around the same idea, though not always explicitly. This is especially true in dungeon crawls, where the players are trying to storm the gates of an unnamable evil. Even in failure games like that follow a predictable arc, where players get stronger and there is noticeable tension in the endgame. Dungeonquest has some of those moments, but they happen without much rhyme or reason. Iâ€™ve seen people escape in nail-biting endings, but itâ€™s more common for the game to end with the characters trapped in a room forever, or killed by a golem. In other words, the players arenâ€™t chosen at all. They arenâ€™t special or qualified to raid the dungeon, and they certainly arenâ€™t chosen ones. I mean, would the chosen one defeat an evil sorcerer and then immediately fall down a bottomless pit?

Dungeonquest has gone through several iterations through the years, the most famous one from Games Workshop in the 1980s. This current iteration is from Fantasy Flight Games, and it represents their second attempt at the game. The first came out several years ago, and featured a surprisingly complex combat system that was at odds with the aggressively silly attitude of the game. The response was mixed at best, and so the current revised edition has reverted to the old rock-paper-scissors combat from previous editions, and it is better for it. Another good move was incorporating some elements from the Games Workshop expansions, such as subterranean catacombs which allow players to die without even having their character on the board.

There are flaws in the design, but itâ€™s one of those games that takes its flaws and turns them into assets. It needs to be random and brutal, and it needs to be possible for the player to be knocked out in the first turn. It needs those absurd things because the whole fantasy game genre could stand to be more absurd. Not only that, but the entire hobby of board gaming sometimes just needs to lighten up and goof around. Thereâ€™s no better game for it than Dungeonquest.