NO: When anyone thinks about classic roleplaying games, the first title anyone thinks of is Dungeons & Dragons. Well into its fifth edition, D&D still looms large over the whole genre. As has been the case since the original Advanced Dungeons & Dragons, the full experience of this classic game is spread over a whopping three hardback books, usually referred to as the core books. The Player Handbook, Monster Manual, and Dungeonmasterâ€™s Guide have all existed in various forms for almost four decades, and thatâ€™s no exception this time. The Player Handbook could be best understood as the rules of the game, a guide for players to understand the wide world of roleplaying. The Monster Manual and DMâ€™s Guide are more for the Dungeonmaster, the referee/opponent/world-builder who runs each individual session. The Guide is meant to offer insight into creating adventures and stringing them into a coherent narrative, while the Monster Manual has stats and fluff on all of the different monsters and creatures at the DMâ€™s disposal in the world of D&D. While a regular player can get by with just the handbook, an aspiring DM would be well-served to make the heavy investment in all three books. 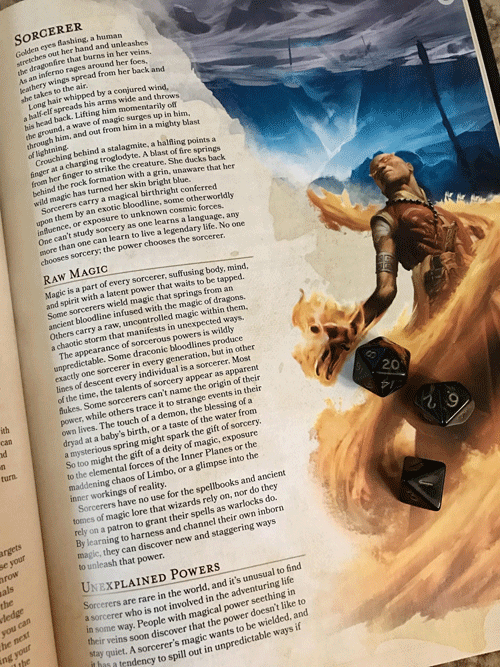 A world of magic and adventure awaits.

Full disclosure, the fifth edition of D&D is my first exposure to this classic system, but it has proven to be a game-changer in how I relate to the hobby. In fact after a recent move my highest gaming priority was finding a way to continue to play D&D, since I couldnâ€™t imagine going back to a version of gaming without the roleplaying experience. In spite of a couple of warts and hiccups, I am very impressed by this version of the game, and the core books mostly do a great job at explaining how to get started. How about you, Raf? What has been your experience with Dungeons & Dragons in general, and with the fifth edition core books in particular?

RC: My dungeoneering life began with the 3rd Edition Starter box set. My poor parents were left trying to be supportive of a grade school Raf in well over his head. From there I played 3e sporadically with close friends, had a horrible experience with 4e in college-it was the people, not the game-and finally came to love the game with this new edition. I began with the Starter Set and quickly picked up the 3 core books and more. To be frank, 5th edition is a breath of fresh air. D&D has always been mechanic heavy with its skill checks, attributes, and modifiers but this new has really streamlined the game and taken inspiration from other modern fantasy games.

The mechanics are extremely important, but this new edition really pushes story and background forward. This is most evident in the Player Handbooks, with the inclusion of backgrounds and the Insight mechanic but it is present in the other books. The Monster Manual is still a classic book of charts and stats but there is more fluff there. I love entries like the Githyanki. The description of their culture and habitats inspired an entire campaign that took my players to the Astral Plane.

NO: Iâ€™d agree with your assessment on all of that. Fifth edition is the first time Iâ€™ve really understood how to play D&D, which probably says more about me than anything else. But the Player Handbook does a really good job of explaining the game as well. It seems to be approaching it by thinking of how RPGs would look to new players, rather than how a fifth edition of D&D will look to established fans off the game. Itâ€™s very approachable, and itâ€™s the best of the three books, not to mention the most essential one. The Monster Manual is likewise very useful for DMs, particularly in how it lays out the stats for all of the creatures. The details it provides are a lot of fun, and the illustrations are all terrific.

We havenâ€™t talked about the Dungeonmasterâ€™s Guide yet. Itâ€™s the book Iâ€™ve spent the most time in, and itâ€™s also the toughest to parse out. Itâ€™s quite useful, but it has some definite problems, namely in its hodge-podge of info and weird organization. Has that been your experience as well?

RC: Yes. Itâ€™s the book Iâ€™m most disappointed with, though thatâ€™s only if I start nitpicking. This 5th edition DMâ€™s guide is full of alternate rules, additional systems, and mechanical bits and bobs that donâ€™t seem necessary. So much of the core experience of 5e is grounded in storytelling and narrative that most of the DMG feels unnecessary. Iâ€™m sure there are thousands of D&D players who live for feats and specific rules for chase sequences, but Iâ€™m not one of them. Whatâ€™s there is good; I just ignore it all in my search for magic items.

Magic and Wondrous items have been my favorite part of the DMG in all editions. While I feel adept at crafting an engaging campaign, I have difficulty coming up with specific balanced magic items. I love skimming through this section and imaging what kind of trouble my players could come up with if I gave them a Cloak of the Manta or the hand and eye of evil Vecna himself. Also tucked in there are charts and instructions to help people like me balance their own items, even if we donâ€™t have the creative juices to come up with something exciting. What do you use the book for?

NO: So far itâ€™s been used mostly as a springboard for building encounters and adventures. The other part that has been useful for me as a new DM is the section on running the game and how best to parse out experience. The doling out of XP is a particular D&D element that had always eluded me until reading the DMâ€™s Guide. My only complaint about this particular aspect is that the alchemy for encounter creation is a bit overwrought, though not as much as Iâ€™d been led to believe. The magical items are also a real treat, though they are dropped right in the middle of the book, when it really feels like something that should be at the end. Kind of a quibble, but it does break up the flow of the whole thing, if youâ€™re the type who wants to read these books all the way through.

RC: As an aside, I spent a few hours doing the math on all the encounters in the Starter Box to see how they shook out using encounter creation rules. Donâ€™t feel bad if you die.

NO: But I would agree that the DMâ€™s Guide probably commits too much space to things that arenâ€™t strictly necessary. It devotes a whole lot of real estate to explaining the fourteen planes of existence, and it insists that every campaign needs to nail this stuff down. The truth is that no one knows what your campaign needs better than you, and you might not need to worry about that kind of thing very much. Likewise it places a lot of importance of developing an overall plot, and as any DM knows, no plot can survive contact with actual players. There are also places here and there where it feels like a catch-all for info that wasnâ€™t in the other two volumes. The index I have used the most is the list of monsters in the back, organized by challenge rating. This seems like the sort of thing that really needed to be in the Monster Manual, but I guess they had a hard page-count they needed to stick to in that book. 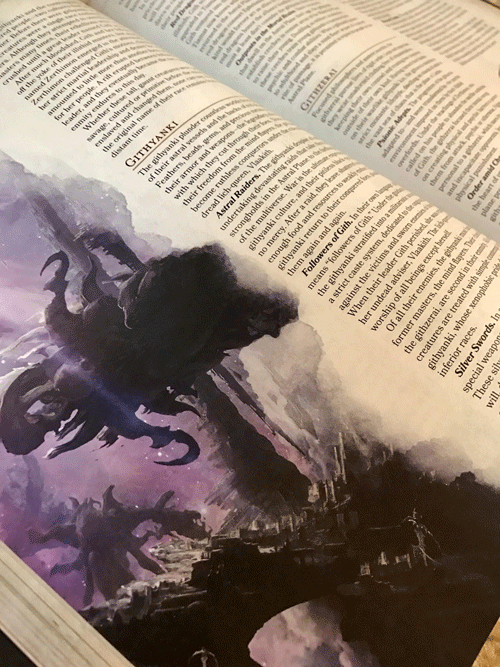 Two full pages about the Gith and we havenâ€™t even seen a stat block yet!

RC: Yes! Thatâ€™s such a handy chart. While I really like how the MM entries flesh out many monsters, I wish there were entries or indexes designed to help you put different monsters together. Do gnolls partner with goblins? Would be common to find a T-Rex (yes there are T-Rexes) in the lair of a Purple Worm? I know the answer is that itâ€™s up to the DM, but itâ€™d still be nice to have some suggestions for when my creative juices arenâ€™t flowing.

Have your fellow players found it easy to pick up and learn? The PHB is written to follow the steps of character creation, which Iâ€™ve always enjoyed.

NO: Yeah, itâ€™s definitely an easy system to learn, especially if you have someone there who can walk you through the early weirdness of roleplaying in the first place. Even better than that, the 5th Edition is an easy system to internalize. While you will always have to refer to the books to figure something out, those moments become less and less frequent going forward. My current group is filled with people who have only recently started playing, and we all feel quite comfortable with the bulk of the game. I mean, we havenâ€™t tried anything like underwater combat, but when and if we get there I think weâ€™ll be able to latch onto it pretty easily.

I feel like Iâ€™ve been a little hard on the Dungeonmasterâ€™s Guide, but the truth is that itâ€™s still a very useful book. All three books do a really good job at making a rather complex system quite approachable, while still offering a lot of flexibility to experienced players to allow them to tweak the game as they see fit. While itâ€™s not entirely airtight, it really does provide enormous versatility in play-style, genre, and world-building, and it does so in a manageable way. It helps that Wizards of the Coast have so far been pretty sparing with extra rules weight for 5th Edition, which sets the barrier for entry a good deal lower than in, say, 4th Edition. Whatever else Iâ€™ve said in this review, I absolutely love Dungeons & Dragons in its newest form, and I look forward to spending years with this game.

RC: Absolutely. The Player Handbook is indispensable for everyone around the table and is a great product. The DMs out there should look at the Monster Manual and Dungeonmasterâ€™s Guide in that order I think. Ultimately though, all three books are great. The D&D core rulebooks have always formed the foundation for the edition and 5th Edition is excellent. 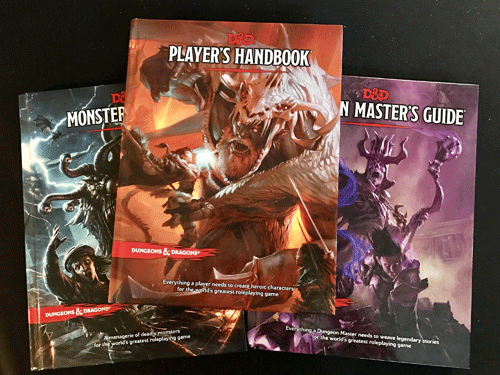