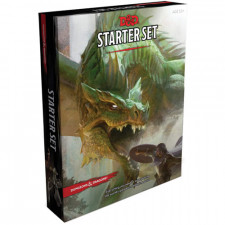 Those five words, spoken in nearly every session of every game of Dungeons & Dragons, contain both the hopeful promise and potential quagmire of an open world RPG system. Now in its 5th Edition, Dungeons & Dragons is the largest and most widely known tabletop RPG and its influence on the modern hobby cannot be overstated. With this Starter Set, Wizards has put together a top-notch entry into D&D that gives everyone around the table what they need to start off on a fantastic adventure.

Part of what makes D&D so appealing is also what makes it so hard to get going. You can do almost anything. The players are free to fight the dragon, talk to the dragon, or see the dragon and nope right out of town and find something else to do. Itâ€™s true that 5e has streamlined things and put more of a focus on storytelling, but it can still be daunting for the Dungeon Master to know where to begin, and difficult to convince someone to forsake making a player and run the game. The Starter Set does a great job at making this role both fun and easy, which is its greatest accomplishment. The box includes â€œThe Lost Mines of Phandelverâ€, a fleshed out story to take your party of adventurers from level 1-5. Itâ€™s a high quality story that starts in a pretty linear fashion that will help you get your bearings and branches through a number of chapters that vary from sandbox style to dungeon delve. Along the way your characters will meet a number of NPCs both good and evil.

Thereâ€™s Klarg, the bugbear leader of a band of goblins whose cave your players can storm with their swords drawn on their way to slaying him. Or they can sneak through it and charm him into revealing his secrets and pump his guards for information on the local Big Bad Guy. Thereâ€™s also Sildar, Knight of the Lordâ€™s Alliance and friend to the characters who will provide them information and resources. If they save him in time of course, otherwise he is Former Knight of the Lord Alliance and nothing more than a source for some gently used armor. Whatâ€™s important here is that the starter set doesnâ€™t just describe the scene, but it gives the DM tips and pointers on how to play these characters and how they would interact with the good guys. Itâ€™s something that was missing from the third edition starter I tried years ago, and leads to a rich experience you can get set up and start playing quickly.

That attention to fleshing out the characters and narrative of the provided story goes a long way to making the game more enjoyable for the actual adventurers as well. The fact that this is a pre-written story doesnâ€™t constrain the players as much as expected. The examples I gave above are from campaigns Iâ€™ve run for two different groups. The story hooks provide just enough incentive for the players to run into the major events or characters, but what they actually do will be as different as your groups. They can do what they want to do, and that will change with each play. The included pre-made characters come with stories and backgrounds that will give a new player the information they need to learn how to roleplay and itâ€™s a lot of fun to explore the world with new people running the same characters in very different ways. This game will also challenge you, both in the sense that killing evil wizards and ferocious dragons is difficult and in the sense that pretending to be elves and dwarves and deciding what to do in a fantasy world can be difficult.

Dungeons & Dragons is a very rich game. While there isnâ€™t the ultimate freedom of some modern story driven RPGs, the full rules cover an extensive range of classes, races, skills, and spells. Itâ€™s impressive and yet some players may not want to jump right into the deep end of this particular pool. The Starter Setâ€™s basic rules mean that youâ€™ll be rolling, cheering, and cursing your luck quickly and can relax confidently in the knowledge that the current adventure has been crafted with a new player in mind. It never feels anemic, but you donâ€™t have to grapple with the Grapple rules on day one. If youâ€™re the DM, all you have to do to get going is open the box and read the first chapter; if youâ€™re the player all you need to do is show up ready to roll.

In front of you sits a cardboard box. The legends speak that inside is a portal to an unknown and hidden world of heroism and adventure. Emblazoned on the cover is a dragon, locked in mortal combat with a group of fighters. It calls to you.

What do you do?