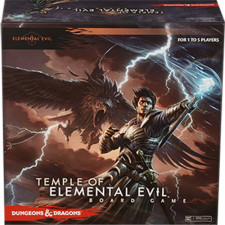 In 2010 Wizards of the Coast released its first Dungeons and Dragons Adventure System Game, Castle Ravenloft. I immediately fell in love. Here was a very simple, approachable dungeoncrawler closer to HeroQuest than the tactical slog of Descent and it was sloppy with classic D&D trappings. You could explain it in five minutes to a group and play through a fun hack-and-slash adventure in an hour. Two more games in the line were released, Wrath of Ashardalon and The Legend of Drizzt, and I loved them even more. Now, five years on and after something of a hiatus, the Adventure System is back with a new game published in cooperation with WizKids. To date, The Temple of Elemental Evil was my most anticipated game of 2015 and as jaded and cynical as I am about most board game releases after well over a decade of writing about them, I still squealed when it showed up on my doorstep.

I canâ€™t say that it didnâ€™t disappoint, because there are a couple of critical points where I feel like opportunities were lost, balls were dropped and all of that. Donâ€™t get me wrong- this is still an imminently fun, simple dungeoncrawl with lots of good content and packed to the gills with great figures. And it still has that irresistible, real-deal Dungeons & Dragons atmosphere. But ultimately it remains much the same as the first three games. Move, take an action or move again. Flip a new dungeon tile if you are on an edge. Players control monsters when they appear, following preset AI routines that usually amount to â€œmove to the good guys and hit themâ€. Encounter cards add pressure and make your life in the dungeon difficult.

The scenario design in these games was never particularly complex or layered, but the quests offered in this edition are quite a few steps backwards from the momentum built between the Ashardalon and Drizzt releases. Fewer special components, fewer unique objectives and more â€œget to tiles 9-12 and find the bossâ€ adventures. Despite some rather rudimentary town-based missions, there seems to be less variety on offer here. The heroes are sort of ho-hum, standard race/class combinations with powers similar to what weâ€™ve seen before. The tradition of bringing in classic D&D monsters (Bugbears!) continues and is certainly welcome, but the monsters are also something of a let-down. The elemental cultists are sort of boring and you fight these guys all of the freaking time. There really isnâ€™t any kind of improvement in terms of the simple AI that drives them.

So letâ€™s think of Temple of Elemental Evil as D&DAS version 1.5 and not the 2.0 that myself and other fans of the game had hoped for. There are some positive changes, and thankfully nothing is necessarily moving in a negative direction should there be (hopefully) more games in this line. All the things that were good before are good here, itâ€™s still supremely accessible and fun to play and veterans will nonetheless appreciate the slight upgrades.

The campaign system is a major improvement in the way the game handles experience and also campaign play. There were some sort of perfunctory attempts at creating a sense of persistence between games in Ashardalon and Drizzt, wherein your two-level characters could spend some money and draw treasures. That has been scrapped, and in this outing most of the treasure deck gives you gold rather than magic items. Each adventure has a kind of pass/fail outcome which impacts not only character rewards, but also the addition of upgraded treasure, monster, or encounter cards into those respective decks. Characters can sell items and spend their hard-won gold on once-per-game upgrade tokens that increase in value for the entire team per purchase or they can spend 1000 gold to flip their card to second level. The silly system of spending XP in game when you roll a natural 20 is no more, doing away with one of the weaker pieces of the original D&DAS design.

This time out, XP earned from slaying monsters is strictly used to cancel encounter cards. As a whole, I think the encounter cards are much more interesting than in past games and I especially like that traps have been moved from these cards and onto the actual dungeon tiles. A tile might have several trap spaces onto which you place face-down trap chits. It could be a dud, or it could be a nasty spear trap or something to that effect. This makes the Rogueâ€™s disarming abilities and others that affect traps feel much more integrated into the adventure.

Another new feature is dungeon tiles with elemental traits, what with this being the titular Temple of Elemental Evil and all. Some scenarios and encounter cards specifically interact with these elemental sigils and that suggests some interesting possibilities that never really quite amount to much. Likewise, the town element, which brings in a cast of villagers and a couple of missions that feel sort of awkward and not really congruous with the gameâ€™s hack and slash approach, feels tentative. I keep wishing that they developed these ideas more and Iâ€™m sure fans of the game will do so on their own.

The gameplay is still there and the quality matches up one to one with the old games, so everything in this game is mostly interchangeable and compatible with the titles you might already own. This is great. But there are seams. Some elements from the old games donâ€™t quite work here, some elements from the new game donâ€™t quite work there. Iâ€™m not quite sure how to retroactively apply the campaign system to the older games, but youâ€™re going to wish it was there all along.

To top off what seems like a litany of complaints about a game I adore (trust me, this is a tough love review), Temple of Elemental Evil is simply way too easy. Both solo and with a group, I think weâ€™ve blown maybe three Healing Surges over the course of an entire campaign. The heroes keep getting stronger and stronger, the villains might get a couple of upgraded monsters that may or may not be drawn. It isnâ€™t that there arenâ€™t tense moments and do-or-die situations because there still are, but it feels like there are more â€œsavesâ€ and more power at the heroesâ€™ disposal. I hesitate to call it out of balance in favor of the heroes, but it might be. The lack of challenge is ironic, given that the game is based on one of the more notoriously difficult D&D modules.

But still, Temple of Elemental Evil will still delight fans of this system and for those new to it this is absolutely the best way to start exploring it. In some ways, it is the most refined of the four games and in others itâ€™s the most ragged. I donâ€™t think, however, that it will convert those who were turned off right away by Castle Ravenloftâ€™s simplified approach to the genre that really has more to do with classic family games like Dungeon! than it does with the more hardcore, Warhammer Quest style designs. Itâ€™s hard to be too tough on a game that delivers so much simple, meat-and-potatoes fun with in a classic setting.