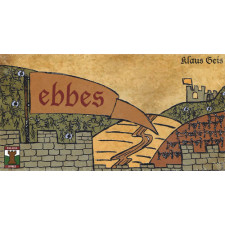 Trick-taking games appear as old as playing cards themselves, both originating in China and moving to Europe by way of the Middle East. The first western example, KarnÃ¶ffel, is attested in 1426, just a half-century after paper cards were introduced there. Six centuries and a legion of games later, it seems unlikely that anyone could constructively add to the genre. Yet the style is experiencing a modern Renaissance of late.

To start with, Klaus Geis unconventionally refuses to capitalize ebbes, which in a particular German dialect means â€œsomething,â€ a concept that impacts one of the gameâ€™s goals and scoring elements. This trick-taking contribution feels mechanically familiar. Ebbes includes five suits with cards valued from 1 to 15 (though you will rarely play with all). The lead player opens a trick with a card and others must follow suit, if able. Otherwise they may choose to trump or discard. The highest card of the suit lead, or the highest trump, wins the trick. The winner of a trick leads to the next. 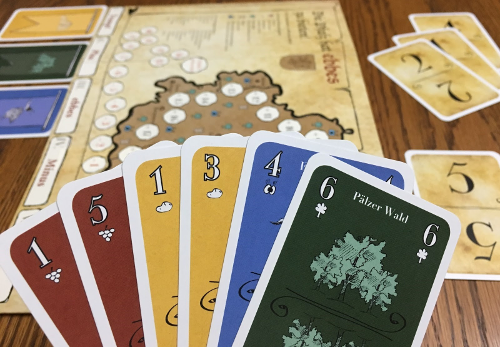 Where ebbes immediately distinguishes itself is through the delayed revealing of contracts. As you begin a game, neither trump nor point cards have been established. They will be via a separate numbered designation card and player decisions. The dealer flips a random designation card before starting each hand. As the numbers matching that designation are played, their corresponding suits will become (in order) trump, positive, ebbes, negative and nix. So if the designation card is a 3, and the first 3 played is of potatoes (yellow suit), then potatoes will be trump, even if potatoes have already been played earlier.

The second 3 played will determine which suit is worth points. Next is the ebbes suit, which awards three points to all players who do not have either the most or the least of that suit, hence at least â€œsomething.â€ The fourth designated suit is worth negative points while the final suit is basically of little consequence, although the player who collects the most decides who leads the next hand. The score is tracked on a small board and the game lasts until someone reaches the end or one falls so far behind they are a Dabbscheedel (nincompoop)...or after an agreed upon number of rounds. I secretly pray a session always ends with a Dabbscheedel, because thatâ€™s just brilliant!

The trick-taking family is large. There are dozens of major game titles, with most boasting multiple variants, rules, player counts and other implementations - not to mention local peculiarities. The combination of versions is staggering. And thatâ€™s just counting whatâ€™s available with traditional standard decks. 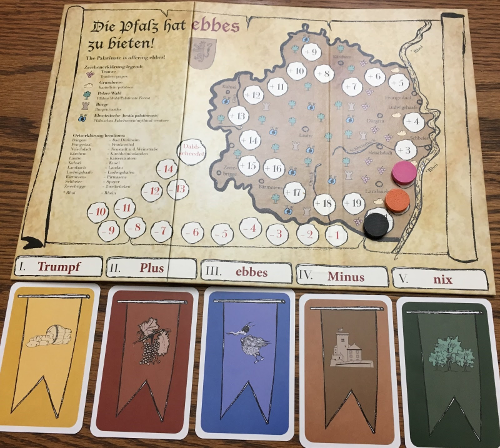 Ebbes is a recent addition to the string of commercially produced deck designs since the genreâ€™s German resurgence in the 1990s with popular titles like Sticheln, Was Sticht and MÃ¼. It effectively captures a good deal of what makes the style so enduring: teach-ability, accessibility, sociability and depth of play through minimal components and randomness. Yet it also offers its own stamp on the category.

Indeed itâ€™s one of the more strategic trick-taking games Iâ€™ve played that still maintains a largely intact traditional framework and simple rules. In other words, it doesnâ€™t have to completely upset the basics of trick-taking to offer something new, unlike many of its contemporaries. But what it does add is significant. Working how to favorably establish and reveal contracts adds another layer of planning to the usual machinations of leading to a strong suit, sloughing unwanted trash, discarding and/or otherwise coaxing opponents to give you what you want and commit themselves earlier than when they wished.

The titleâ€™s namesake suit is a good example of this layered strategy. Capturing positive points while avoiding negative cards is a common element in the family - although made more challenging here in that you may miss the positive and collect the negative before you even know whatâ€™s what! However, the third point producing suit, ebbes, requires new tactics to ensure you have something to represent the suit, while collecting more than the least but not the most, or risk ending up with nothing. That enhances traditional trick-taking principles such as short suiting, card counting and discarding.

Some genre die-hard may decry the designâ€™s uncertainty. Indeed, I suspect that ebbes will fall hard into the â€œlove it or hate itâ€ divide. Suits typically will not receive a designation until after several tricks. Even trump may not be established until the first few of the hand. If you have a short suit, it all may be for naught if that winds up trump, leaving you without much offense; or say even negative, meaning you have less influence as to how theyâ€™re distributed and thus vulnerable to getting stuck with penalty cards. Purists might prefer a game in which they can control trump, as with bidding, or one neglecting trump altogether. Manipulating a handâ€™s contracts to your advantage often leaves you at the mercy of luck of the draw. For those players, there is a quasi-bidding variant which might prove useful. But I find ebbes a fresh challenge that ramps up the genreâ€™s strategic nature, an attractive element already inherent to most trick-takers, though nonetheless usually more subtle.

Of course, ebbes is expected to add its own distinctive, modern twist to the common trick-taking formula. Thankfully it manages that while still harkening back to the charming simplicity of traditional examples. An element of the unknown may prove a turnoff for veterans. But in retaining the most basic of rulesets, the unique design piles on a layer of strategy that is both manageable and rewarding. It proves that you donâ€™t have to violently upend the standards of a particular classic to create something worthy of a field already crowded with distinguished games that have stood the test of time.