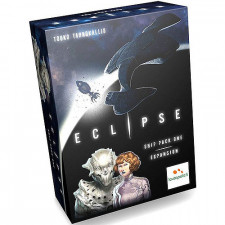 One of the big draws of lush thematic games are little plastic toys for middle aged men to push around and squeal "PEW PEW PEW" in between gulps of Mountain Dew and mammoth pawfuls of Doritos. Fantasy Flight Games has spoiled the industry and set a high level expectation for deluxe skyscraper MSRP games chocked full of miniatures. While Eclipse is one of the finest thematic designs ever created, its stock dull diminutive space craft left much to be desired.

Ship Pack One is a mea culpa from Lautapelit.fi as the expansion introduces 108 new plastic models to replace the chaff of the base game. Each of the alien races gets a set of unique sculpts which are full of flavor and character. Economically, but perhaps lacking inspiration and confidence, the pre-existing miniatures are used to represent the human fleets. This is a slight cop-out but understandable in the greater scheme of things as the cost of machining molds for plastic production is excessive.

The new alien pieces are slick. The Planta feature bulbous sprouts and the Orion Hegemony blocky freighters of death. The majority are distinct and vibrant, a contemporary take on the ultra-futuristic design of foreign civilizations. When you pull them out players will remark how fascinating they are and want to paw through all of the baggies and eat up precious gaming time by imitating a John Williams score and echoing blaster sounds. Eclipse candy is served up in copious amounts.

There's a small amount of additional ephemeral inclusions of rare tech/developments, an outer hex, new GCDS, variants, and small touches. These seek to pad out the release and goad you towards purchase. None of these small items are in and of themselves the reason to pick this up - you either want to bling out your huge swathing space opera or you don't. Gameplay is not altered with this expansion in any meaningful way and this serves as merely a shout out to the new-fangled crop of "game pimpers" that seek to increase their enjoyment by adding bling and spinners to their library.

A few issues do arise that detract from the potential satisfaction of integrating these hot new miniatures into your soiree. The first is the most nagging as the alien species receive miniatures for their Starbases, which are fantastic. However, those of us slumming it as homosapiens are stuck with the stock cardboard tokens despite the fact that humans are the only race to actually start with such technology. Odd and probably a cost cutting decision as opposed to a neglectful oversight, it's one of my main issues with this box.

The second item of annoyance is the fact that none of the expansion races see screen time. So when you're tearing the stars up as the Rho Indhi Gangsters you're back to those square and inelegant human designs of inferiority. It's like a motorcade blasting down the street with a portion of the cars buffed up with spinners and full chrome detailing while the other half are junkyard angels whose most notable element of character is an odd bout of rust coloration.

The designation of Ship Pack "One" certainly means the expansion races are a possibility down the line, but not launching with them demeans the integrity of what has been offered. It's not overly offensive and these new miniatures are certainly still worth including in your weekly space opera jaunts, but it's like a constant thorn in your side when a new player sits down and has to ask why he gets a bag of dollar store plastic army men and you're doing backflips with a fully pose-able Snake Eyes.

A degree of nitpicking can also occur concerning the size of miniatures. They're nice, thick, and easy to look at, yet occasionally you'll realize perhaps they're too big. It can be difficult fitting a couple of these dreadnaughts onto a hex already bristling with fighters and cruisers. The expansion does include a couple of overflow tiles to store your minis which helps, but you will still more often than not just pile it all on and obfuscate information you will certainly need to see. There's a trade-off here between visual impact and playability and it's ultimately about a user's preference as opposed to any objective reasoning.

While there are a couple of nagging complaints, at the end of the day Ship Pack One is a solid pickup for those who like to add a bit of luxe. It does exactly what it says on the tin and will add a touch of spice to a game which is perhaps a little bit more visually dim than it should be. You won't see me picking up my pom-poms but you will see a fleet of stunning plastic if you join my game. Well, mostly stunning.