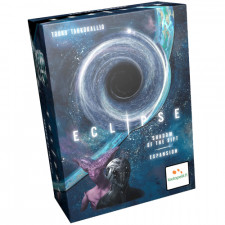 Rise Of The Ancients was a relatively fantastic expansion that pushed Eclipse forward a solid notch. It definitely had a few clunky modules but the stellar elements rose to the surface. Shadow of The Rift is the newest addition and looks to perpetuate the quality coming out of the Lautapelit.fi studio.

At this point most anyone would be hard pressed to come up with new inclusions in an already robust design such as Eclipse. I certainly would never have guessed angling towards time travel and evolution. Yet, here we are with two new factions that are entirely distinct from anything that's ever come prior in this game. The new species in the previous extension were interesting and noteworthy, but none as significantly game changing as the new breed.

The Shapers of Dorado are the most exciting of the new races. This group takes advantage of Time Distortion to borrow assets from the future or send current supply forward in time. You have a lend-lease contract ongoing with yourself and must successfully manipulate this new mechanism to maximize your gain.

This sounds a bit heady but mechanically it's pretty slick and efficient. You draw three tiles from a bag which dictates your time manipulation options. Additional ones will be drawn as you go and you can flip colony ships to discard and re-draw. The tiles themselves will allow abilities such as immediately spawn a Dreadnaught, gain 5 Economy, or instantly research +3 Computers. You can also send ships or a whole unexplored hex into the future to be uncovered later. You can borrow actions and other resources as well. It's wild and crazy and can be as powerful as it sounds.

The trick is that you must close the event by paying it back (or receiving the benefit) a set number of turns in the future. So if I receive five Science now, in exactly three turns I need to pay eight to the bank. Failing to do so will create a time paradox which will penalize you a set number of victory points, typically one or two. Each Distortion that you complete also counts as one VP at end game scoring. What do your opponents do when they see you pull a Dreadnaught from the ether of time on the very first turn? They cry.

Combine that with the Shapers starting shiny new Soliton Cannon - a three damage weapon - and you have a recipe for wild swings. Yet, everything seems roughly balanced over the long haul. Their native initiative is horrific and the lack of blueprint flexibility can make them much weaker in the end game. Much of the strategy in playing the Shapers is managing your Time Distortions and tactically choosing to not pay one or two back, eating the penalty. In some ways it reflects a similar philosophy as purposeful bankruptcy.

The Octantis on the other hand draw Evolution tiles to further the cause. These new components can be purchased using a Research action with an all new Mutagen resource the faction naturally accumulates each turn. The Evolutions themselves are equivalent to tacking on additional racial special abilities to the faction. This ballooning of power knows no bounds as you start stepping on the toes of your opponents and swinging your elbows around into their asymmetrical breathing space.

It can be slightly aggravating to see much of what makes your faction unique assimilated by some purple hammer-head shark wannabes, but again, trust in this design team as multiple checks and balances exist. The huge plus here is that this is a race that has a very exploratory feel as you're not quite sure where the game will take you based on that Evolution draw. You do have flexibility as you can re-draw much like the Shapers, but certainly the whims of fate have an unwashed finger stuck in your coffee.

The flipside of both of these new faction sheets includes another oddball - the Pyxis Unity. These freaks collect only a single resource and ignore the color of planets they colonize. They also have really wacky actions that allow them to perform multiple watered down abilities. So instead of building with a limit of two, you can build one ship and upgrade with one tile. They also may level up their ships to the next higher rank on the blueprint. This is an exceedingly weird race that is fun to play but takes a bit of a back seat to the main two factions in the expansion.

The additional inclusions add variety through new modules, just like Rise Of The Ancients. We have rare technologies that grant a weakened form of Evolution or Time Distortion, along with some spiffy new weapons and shields. The crazy new Rift Cannon rolls its own custom die doing straight up damage and ignoring shields and computers. The catch is that you can commit friendly fire. Several new developments are thrown in to pad out the number as well and a nice addition if you use them.

New hexes come in the form of Deep Warp Portals. A random sector in each of the three rings now links to an off-board tile of enormous strength. Think of it as another middle hex off on an island and out of reach that requires a warp whistle of sorts to get there.

Unfortunately the Warp Nexus island is protected by rampaging anomalies that EAT planets. Yes, they destroy planets they move onto and fire at ships with those aforementioned Rift Cannons of death. Fate here is partially steered by the player though as you can place anomalies on a static defensive side, or flip them for a mobile option that will randomly move about the map. Discovering a Deep Warp Portal on the edge of an opponent's empire and unleashing a phantom fleet of motes and embers that will devour his scum sucking Planta infestation - exhilarating stuff.

The final element of craziness is a set of Reputation tiles that award special benefits when drawn. If you pull one from the bag you keep the tile and may use it at any time. Powers include re-rolling combat dice, gaining one resource, taking a full action as a reaction and many more. What's really clever is that this incentivizes combat early in the game. The psychological effect was noticeable at my table as players would just edge a little more towards risk-taking and pushing boundaries. This shakes up the established metagame strictures of the design just enough without veering off course. However, I do think this module should be completely jettisoned if playing with Descendants of Draco as it throws off the balance. Not being able to combat Ancients puts the Draco behind as other players grab nifty little gifts for throwing lasers at peaceful natives.

Rise of The Ancients was an expansion that included several must-have modules and a few that were weaker or completely taste driven. Shadow of The Rift feels like more even with less waste, but it is not quite as impactful or game changing on a macro level. The two new races are the most radical and divergent in the entire system, but I don't feel as though the other elements are as crucial as the anti-missile technology and sector tiles in the prior extension.

Overall the fire in this expansion did surprise me. Despite loving Eclipse, I didn't expect to be overly pleased with even more content and thought we'd get way out there inclusions that were more experimental than sound. Instead we got way out there inclusions that are wildly fun and full of taste. It's 2016 now and this game is still kicking like Bruce Lee in his prime.