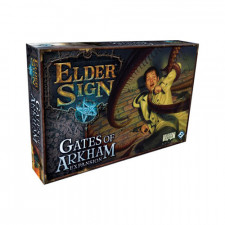 Of Elder Sign and its first expansion, I can say no more than I have said already. If anything remains vague, it is because of the dark cloud which has come over my mindâ€”that cloud and the nebulous nature of the horrors which brought it upon me.

I concluded my review of the base Elder Sign (link) by pointing out that it's an inherently confused design. It can't decide whether it's a dice game or a thematic adventure game. I also mentioned that, rather than the minor tweaks introduced by its first expansion, what Elder Sign really needed was a ground-up redesign. Elder Sign: Gates of Arkham is that redesign, and it's well worth the wait. People have always tried to call Elder Sign "Arkham Horror Lite," but it never deserved that title...until now.

Released in 2011, Elder Sign was the low point of Fantasy Flight's Arkham Horror franchise. The digital version, Elder Sign: Omens, improved the game by allowing you to play in short bursts (the board game tended to overstay its welcome) and the addition of specialized scenarios based on the Ancient One selected. These themed campaigns revitalized the game, adding a greater sense of adventure and new strategic choices. The board game's first expansion, Unseen Forces, ignored all of these innovations.

Gates of Arkham finally brings the concept of themed scenarios to the tabletop game. It introduces a thick deck of new Adventure cards set in locations around Arkham, completely replacing the old Museum Adventures. It does the same thing for the Mythos cards, replacing the old ones with a new deck that's more challenging, tactical, and built especially for the new Adventures. Then, it adds two new decks of asset cards for the investigators and several major new mechanics that completely change how the game is played. Before, Elder Sign didn't know what kind of game it wanted to be. Gates of Arkham finally takes a stand: it's an adventure game, damn it.

The worst part of Gates of Arkham is that it's not a standalone. You need at least the dice, asset cards (items and so forth) and monsters from the base game in order to play it, but if you buy Elder Sign just to play Gates of Arkham, you'll have a lot of dead weight. But it's still worth it: Gates of Arkham turns a mediocre-to-bad game into a good-to-great one.

The main way it does this is by increasing the uncertainty. In the museum, you always knew the requirements and rewards/penalties for each Adventure, so it was pretty easy to math out the best choices for each turn. In contrast, the new Arkham Adventures enter play face down. Each Adventure is tied to a location from the Arkham Horror map, like Hibb's Roadhouse, South Church, or the Unvisited Isle. The backs of the cards name the location and tell you the approximate difficulty of the Adventure. That means that, like Arkham, you can improve at the game by becoming familiar with each location's mini-deck and making calculated choices based on what you might encounter there, though you'll never know for certain.

The backs of the new Adventure cards also introduce an effect matched to the location. These come in two flavors: the most difficult locations have At Midnight effects that do things like spawn a monster or remove an Elder Sign, undoing the investigators' progress in defeating the Ancient One, while the easier locations have optional good effects that let you spend trophies or advance the clock to gain allies, items, spells, or the new Skill and Membership cards. Once you are at a location you must reveal and attempt the Adventure or suffer its penalty. You want those At Midnight effects out of play, but the penalties for going in unprepared can be even worse.

You may have noticed that this sounds a lot like the Encounters in Arkham and Eldritch Horror. This is as it should be, since (as I mentioned in the base game review), the dice mechanics in Elder Sign aren't really all that different from just rolling for successes on a regular d6. The meat of the gameplay needed to come from elsewhere.

To complement these new location effects, Gates drastically revises the Entrance card. Instead of all sorts of goods and healing for sale, you are now limited to three choices, each of which costs two trophies: flip an Adventure face up, discard an Adventure from play (only if it has no monsters, investigators, or open gates), or heal one sanity and one stamina. Choose any of these, though, and you must immediately move to and attempt an Arkham Adventure. There's no hanging out at the Lost and Found and gradually beefing upâ€”do something or skip your turn completely. Furthermore, the goods on offer now depend on the locations in play.

The Event icon on some Adventure cards increases this sense of uncertainty. Before you start rolling, you draw a card from the new Event deck, which can either help or hinder you. The underlying theme is that you can't calculate your way through the game any longer; like any adventure game, you never know if you're prepared for what's coming.

The new Gates mechanic completes the metamorphosis to Arkham Horror Lite. Whenever an Other World card enters play or an effect says a Gate opens (lots of these on the new cards, including the new doom tracks), the Other World enters play face down and gets a Gate token, with a matching-colored token being placed on an Arkham Adventure of your choice, locking investigators out of that Adventure until you've explored the Other World. Many new Mythos cards introduce bad effects based on the number of open gates, so you'll want to shut them down quickly, but that often means neglecting other important considerations. Too many open gates also floods Arkham with monsters, but if you close too many gates without resolving the corresponding Arkham Adventure, you'll get the equivalent of a Gate Burst, removing all seals from play and adding a doom token to the Ancient One. The Gate mechanic offsets the uncertainty introduced elsewhere, drastically expanding the strategic decision space.

I've only encountered one flaw: fighting an Ancient One is still a slog compared to the rest of the game, and it happens much more often now. Here's hoping that, along with a new set of locations (Dunwich?), the next expansion introduces an equivalent of Kingsport Horror's Epic Battle cards.

Honestly, this doesn't even feel like an expansion. It feels like a new (and much better) game that happens to borrow Elder Sign's dice-rolling mechanics to resolve its random encounters. It's much harder, generally quicker (I've lost before the fourth midnight), and adds both an element of surprise and a greater sense of player agency. If you own Elder Sign, it is a must-have expansion. If you were on the fence about the lackluster base game, this excellent addition might be tip the scale.