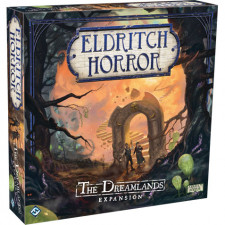 There's no question that the new Eldritch Horror Expansion, which takes investigators to the far-flung and forbidden realm of dreams as described in the Lovecraftian Mythos canon, is an interesting and content-packed addition to what I believe is the best adventure game currently on the market. What is in question, however, is how much that game really needs it. The answer is somewhat complicated. I'm finding that I have the same issues with this big-box expansion as I had with the previous offerings in this format. 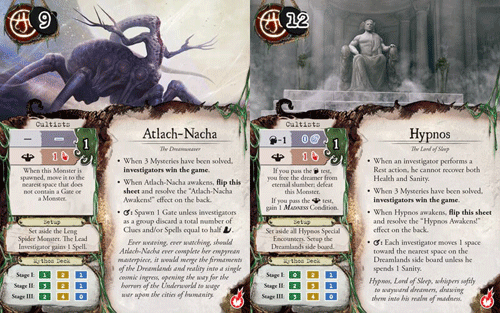 Mr. Sandman is not included among the new Ancient Ones.

There is a lot to dig into and fans of the game are going to find something in here that they like even if the whole package is something of a question mark. A new sideboard adds locations such as Ulthar and Celephais- it's a neat touch that you can get to this board by taking a Rest action. As usual, you get a couple of new Ancient Ones (Atlach-Nacha and Hypnos) and their attendant mystery decks, plenty of new investigators (featuring several familiar faces returning from other Arkham Horror Files titles), new monsters, and encounters for all of the locations in the game. There are new artifacts, assets, and spells - some specific to the Dreamlands setting like famous dreamer Randolph Carter. More conditions, which I absolutely adore, are included as are more Prelude cards which I've never really liked. They feel like clutter. And that is really kind of why I do not love this expansion, as I haven't with the previous Mountains of Madness and Under the Pyramids sets. One of the coolest things about Eldritch Horror was that it blew up the Arkham Horror concept to a worldwide scale while also reducing that game's administrative footprint. Now, with a mountain of expansion content on the table with it, that base game is no longer the streamlined, lean adventure on a grand scale that it once was. I remember back during an early game of Eldritch Horror mentioning to my friends, "as long as they don't start adding side boards". Now there are three. And as I expected, the Dreamlands board is very situational and it can be kind of disappointing to have it out and rarely - if ever- have a reason to visit it. I find myself wishing that these additional locations were part of a more modular concept wherein you would add and subtract elements to ensure that they are the focus rather than a big maybe. Mixing it all in together just tends to dilute the entire game. 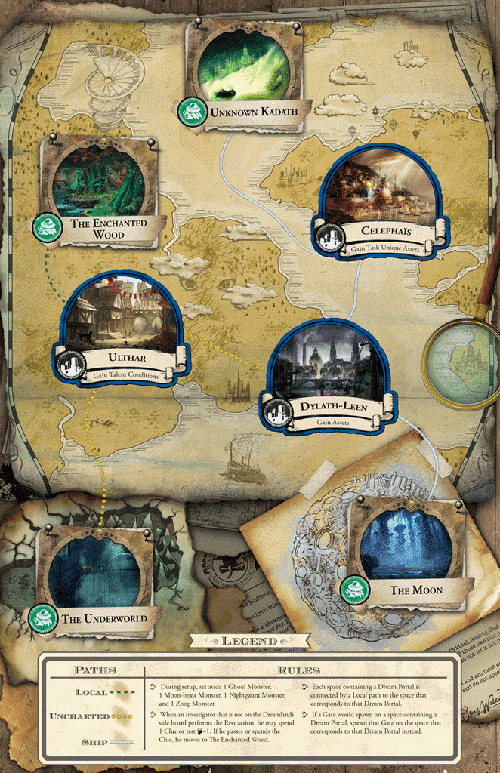 There is a lot I like here. I love the Dreamlands concept, which was already in Eldritch Horror but in a much more limited way. I like the addition of Dream-Quests, although they aren't fundamentally different than any of the other multi-part tests and expeditions in the game. The encounters are good, the new materials overall add a lot of satisfying variety. When the game first released, my only complaint was that there kind of were too few encounters, conditions and so forth.

But now there is already a lot of satisfying variety over the other expansions, in particular the small-box ones that add all of that without spreading a little too thin with the sideboards and watering down the world-wide focus of the base game. As more cards are added, it also becomes more and more apparent that there is a certain redundancy inherent to the game when, effectively, most of the skill checks and tests in the game are mechanically the same other than nomenclature, timing and context. This game is getting to a point, like Arkham Horror or Talisman, where savvy players that have all of the expansions would do well to essentially edit the card decks to reign in the "too much of a muchness" and maybe do something like tailor them so that if you play with Dreamlands, you'll be doing a lot with that board and specific content.

So in the end, if you play a LOT of Eldritch Horror and you have played through everything, seen everything, and witnessed most of the various combinations of elements this game offers then The Dreamlands is a must-have. If you are a more casual player and your set has a few hundred cards that have never been touched and a pile of undefeated Ancient Ones, then The Dreamlands is a much less compelling value proposition. If you're in between those extremes then it really comes down to how much more of this game you feel like you need and how accepting you are of how nothing in this box is going to fundamentally change how you play Eldritch Horror. There is good stuff here, but sometimes you've got to know when to say "when".