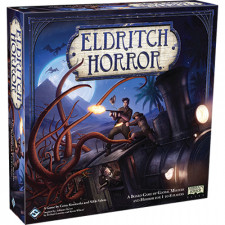 I never fully bought into Fantasy Flightâ€™s version of Arkham Horror. I was promised theme and adventure, and all I got was a massive headache. So I dropped it onto the trade pile and sought out Chaosiumâ€™s original 1987 incarnation, an edition I ended up finding much more fun to play. In just a fraction of the playtime, it delivered the mood, setting, and style of the RPG without all the rules overhead of FFGâ€™s monstrosity. Of course, it had its own problems borne of low-budget 1980s game production- subpar components and an all-too-thin rulebook that left the players to fill in some gaping holes.

So it was with cautious optimism that I approached Eldritch Horror, an Arkham Horror-inspired game recast on a global scale. It promised a high-quality FFG production coupled with a streamlined ruleset. Iâ€™ll cut right to it and state that in no uncertain terms it succeeds at every aspect of boldly paring down the Arkham Horror experience. Clear separation of each phase, turn, and step means that timing issues are a thing of the past. The pacing is cleaned up by shifting the focus from closing gates to specific objectives, which are neatly themed to the unique and horrible attributes of each Old One. All the while, the Lovecraftian feel that kept people coming back to Arkham for more punishment each game night loses none of its potency. Itâ€™s a remarkable achievement.

The game drops between one and eight investigators right in the middle of a global war raging against a Great Old One that is dangerously close to rubbing the sleep out of its eyes, making a cup of coffee, and ripping apart the very fabric of reality. In Lovecraftâ€™s world, humans are practically insects, an idea that is perhaps better driven home against the backdrop of the world stage than it is in tiny New England villages. Players get a broader sense of the time-space continuum caving in around our heads as Epic Monsters spawn around the globe, strange constellations push the world toward its doom, and dimensional rifts open gates to unspeakable evil. Make no mistake: this has all of the thematic narrative of Arkham Horror.

But in Eldritch Horror you donâ€™t have to worry about whether monsters block this kind of movement or that kind of attack. You donâ€™t have to figure out whether this or that monster moves in this or that sub-phase. Sorting out whether a gate draws in an investigator or if you resolve that during Phase 4A or Phase 2B (I could have sworn that was in the rulebook--or maybe I read it in the third FAQ or second errata?). Ongoing negative effects have been changed primarily to occur only when a Reckoning symbol is drawn during the Mythos phase, a neat bit of design that speeds up the game and prevents constant checking for stacked effects.

The newfound focus on a quick, clean pace is evident throughout the design. Players take two simple actions, chosen from a short list. Then everyone encounters either the space they are on or a token at that location. Once everyoneâ€™s encounter is completed a Mythos card is resolved at which point clues may be sprinkled about the board and the terrible consequences of previous encounters with seedy characters or performing dark spells may befell the players. The doom track might tick down toward zero, awakening the Great Old One. And of course, gates will open, pouring deadly monsters out from the other side.

Some have complained about a lack of â€œsoulâ€ in comparison with Arkham Horror, a complaint that strikes me as nebulous and unquantifiable. No, you wonâ€™t be min-maxing crunchy stats on a spreadsheet or camping at a location, waiting for an Elder Sign to show up in a random draw. You may not have that small-town horror movie feel, but instead youâ€™ll get an epic, globe-trotting adventure. The theme is definitely present, and itâ€™s front and center the whole time. The encounter deck is well-written with plenty of crazy, inventive plights youâ€™d expect from some of Lovecraftâ€™s work--though if youâ€™re playing the game often, youâ€™ll start to repeat some encounters quickly. This is an issue FFG attempted to address in both currently available expansions with additional cards for every deck.

Sorry, Arkham Horror fans: the designers have captured the us-against-the-Cthulhu Mythos theme in Eldritch Horror much better than in the gameâ€™s forebear. The Great Old Ones are wildly different from one another, yet all stay well within the confines of the gameâ€™s elegant structure. Rather than simply tacking on an annoying constant effect that players have to try to remember during certain sub-phases of the game, each GOO fundamentally alters the focus of the session. Without spoiling too much, Iâ€™ll just say that Cthulhu will have players sailing the tumultuous seven seas, while Azathoth will drown investigators in a sea of gates and wicked constellations, devouring the world before you hit the two-hour mark. The other boss monsters are just as unique.

While high player counts can see Eldritch Horror clocking in around three or four hours, at lower counts the game plays very quickly. It scales smoothly. One-investigator solo play is feasible and even winnable with some luck stacked on humanityâ€™s side. So whether youâ€™re looking for a solitaire game with a broad scope, a medium-length coupleâ€™s experience, or something to fill out the game night with a group, Eldritch Horror might be the ticket. Itâ€™s not very often a redevelopment can nail down the special sauce that makes the original great while reducing the rules overhead and bulk, but Fantasy Flightâ€™s design team makes it look easy here.