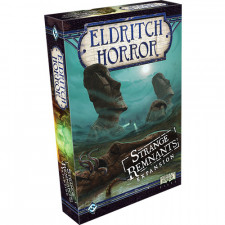 When Eldritch Horror first released, the common opinion (which I did not necessarily share) was that it was a â€œsimplifiedâ€ Arkham Horror. Despite a larger scope- globetrotting adventure rather than skulking around creepy New England college campuses and port towns- Eldritch Horrorâ€™s great act of reducing Arkham Horror had more to do with stripping away the piles and piles of cards, tokens, tracks, chits and sanity-blasting bookkeeping. For my part, I think the game is the best title in Fantasy Flightâ€™s lineup of adventure games but Iâ€™m under no illusion that it is somehow â€œdumbed downâ€ or more compact than its predecessor. Speaking as someone that burned out on Arkham Horrorâ€™s expansion explosion before they even got to expanding the expansions with the Miskatonic Horror set, I felt like the initial release needed more- specifically location cards. Now, after three expansions including the new Strange Remnants release, I think Iâ€™m ready for them to put on the brakes.

Strange Remnants is a decent enough addition that includes a good Great Old One scenario card that is somewhat different conceptually than the usual big, alien gods. Itâ€™s Syzygy, and itâ€™s some kind of cosmic confluence/planetary alignment or whatever except that no hippy-dippy baloney goes on as a result. Itâ€™s a bad thing including a sinister eclipse. And the investigators are tasked with doing the usual Eldritch Horror thing, but with an increased emphasis on ancient ruins and relics. Donâ€™t worry, thereâ€™s still plenty of Mythos to go around, lots of squishy tentacles and Ghantanthoa makes a guest appearance if youâ€™re lucky v. But the overall narrative tone while combatting the Syzygy is different enough to make it compelling.

Lots of new relic cards, including relic weapons, are in the mix ready to flip over and surprise you with their hidden consequences and the new Mystic Ruin cards add some classic â€œweird destinationâ€ places to the map such as Stonehenge and Easter Island. There are four new investigators including a Chef, so naturally my first solo outing was a team-up between said Chef and the Waitress from a previous set. They won, and pretty easily at that.

Content-wise, there is definitely enough here to justify the low cost and fans of the game will undoubtedly appreciate more variables. However, there is a fundamental problem with Strange Remnants and that is that too much of it, in fact almost all of it, feels repetitive with materials included in Forsaken Lore and Mountains of Madness. If you own those two expansions, there really isnâ€™t much new here except for text and effects. The mechanics were already introduced.

Focus, which really should have been in the base game from day one, is re-presented. The Mystic Ruin cards are actually more or less exactly the same thing as the Expedition cards from the original design; itâ€™s just a separate deck of them that you only use with Syzygy or a particular Prelude card. Oh yes, Preludes â€“ one of the gameâ€™s tacked-on and completely unnecessary subsystems â€“ is back. And the Adventure cards, which offer investigators an alternate way to advance Mysteries through a branching path, was already a featured value-adds of Mountains of Madness.

So in a way, Strange Remnants comes across like an expansion for expansions, even though you could play just this set with the base game without the previous releases. And with this oneâ€™s release, it feels like the game is edging closer to Arkham Horrorâ€™s morass of negligibly impactful cards and irritating micro-decks of only occasionally used cards and off-to-the-side administrative functions. Of course, as a fan of the game I like having more of it, but Iâ€™m left wondering how much more they can add on to the game without blowing it in terms of keeping it more manageable and sanely enriched by high quality expansions.

But I actually wasnâ€™t crazy about Mountains of Madness either, despite being associated with Lovecraftâ€™s best story. I felt like the Antarctica board was more burdensome than fun and the extra cards and content there made me lose the sense of satisfaction I had with just the Eldritch Horror box and Forsaken Lore to flesh it out a bit. If you want more Eldritch Horror, I would consider Forsaken Lore to be essential and Mountains of Madness to be a fanatics-only product. Strange Remnants doesnâ€™t feel like it can exist without the other two, but overall it is closer to its small-box relative than its big-box one.

Regardless, Strange Remnants got Eldritch Horror back on the table not only with a group of folks I play with but also for a few solo sessions and I regard that as a net gain. The new scenario is good and I like all of the new cards. The Glamour spells, which grant a lasting and persistent effect, are very cool as are new conditions like the very sinister (and usually deadly) Agreements. It seems like there are more cards that cause an Investigator to lose all of their health or sanity, which knocks them out of the game but I actually like that because of how the game handles defeated players. You can actually go visit downed Investigators, encounter them, and take their stuff. It could be just random happenstance, but in my recent games defeat has happened more often and I like that the mechanics there are encouraged.

For veterans of the game, itâ€™s a fine expansion overall. But it is also a worrying one if it is an indicator of trend. If they never expand this game again, Iâ€™d be good.