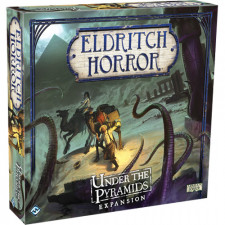 What do you want Eldritch Horror to be? Your opinion on the new Under the Pyramids expansion hinges on your answer. If you liked Eldritch Horror as a lighter, smarter, quicker brother of Arkham Horror, I think Under the Pyramids is going to hurt your enjoyment of the game. There are more rules, more special decks youâ€™ll only access occasionally, a whole sideboard that may or may not come into play. This expansion clouds what I liked most about Eldritch Horror, the elegant structure that led to just as much fun story-weaving as its older brother. But if you lamented the lack of more intricate, granular rules and fiddling with different decks and stacks of tokens in the base game, Under the Pyramids does make the gameâ€™s setting richer and pushes it a step closer to Arkham Horror in tone and structure.

There are a couple missteps with the new expansion right off the bat. The game does not include the previously introduced and well-received Focus mechanism, though thereâ€™s at least one reference to losing Focus tokens. I assume players without the other expansions can simply ignore these cards, but it may cause a few moments of confusion. Either way, it would have been nice to have had that little boon to the playersâ€™ cause. Second, the expansion tends to spread things out into new decks and subsystems rather than work within the confines of the existing game structure. This helps to not dilute some of the base decks too much, but the upshot is weâ€™re left with a game that is constantly creeping out onto more and more table real estate, like a Great Old One oozing forth from another dark dimension.

Now, the content itself is pretty good, so maybe that is not a huge deal. The encounters are as well-written as ever, and they do a great job of thickening up those stacks that some felt were so anemic in the base game. Some of the new encounters are the best ones Iâ€™ve run into in Eldritch yet, including a healthy number that give the player the option to tackle a challenge with a couple different stats. You might decide to muscle your way into a cultish gathering or sneak by quietly and gather up the clues you need. I could take or leave the sideboard, as it doesnâ€™t hinder the gameâ€™s flow too much, but Iâ€™m not really sure it does anything that couldnâ€™t have been done with less rules overheard using the existing game board and design.

The first new Ancient One, the Dark Pharaoh, offers up a nice splash of flavor. His Reckoning effect slowly calls investigators toward the cursed pyramids, then saps away their sanity if they get there. So players have to play around this dark power, making sure that in solving the mysteries on the new Egypt sideboard they donâ€™t get too close to the Dark Pharaohâ€™s lair, lest his Reckoning effect drive them mad. While heâ€™s a slightly more difficult god to face, heâ€™s one of the more enjoyable ones, as each game against him feels fresh and unique. Abhoth seems to be a little on the easier side, but his creature-oriented encounters and effects make the game play out with a fun twist to the usual narrative.

Iâ€™m not really sold on the new Impairment mechanism, which brings along with it a whole set of tokens to negatively modify your investigatorsâ€™ stats. While groups that have mastered the base and some of the other expansions may welcome the added challenge, itâ€™s really easy to get hit with a stack of -2 modifiers to all your stats, at which point youâ€™d probably rather just get killed off so you can start afresh. This also makes one-investigator solo play much more difficult than it was in the base game. Finally, I really think there could have been a more clever way to handle the new functionality, something cleaner than another set of modifier tokens players have to rifle through to find what theyâ€™re looking for.

So there are some hits and misses in here, and the question Iâ€™m left to answer is whether or not the good is worthwhile enough to wade through the bad. For me, the conclusion is a half-hearted â€œit depends.â€ I really like the new content, and the twisted Egyptian setting comes through with style. Iâ€™ll probably include it in some of my plays going forward, or at least not go out of my way to avoid the new stuff, but I would have been fine without this expansion. Eldritch would probably have seen more table time without it, since setup is that much easier when not using one of the big-box expansions.

If you skip this entry in the Eldritch Horror series, youâ€™re not going to be missing a ton, unless youâ€™re dying for more content. If you are a big fan of Arkham Horrorâ€™s â€œeverything-and-the-kitchen-sinkâ€ approach to expansion, this is another creeping step in that direction, and there probably will be a lot of gamers who are happy with that kind of thing. The new Ancient Ones, items, encounters, and other mix-ins are welcome, while some of the new stacks and components just donâ€™t play to the gameâ€™s strengths. If FFG is going to keep me coming back for more Eldritch fixes, theyâ€™re going to have to find a more elegant approach that augments the gameâ€™s inventive design rather than obscures it.