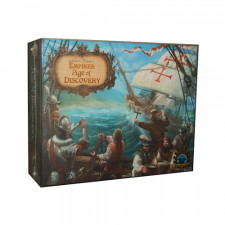 Glenn Drover was always somewhat ahead of the curve. In 2003, he released Age of Mythology through his Eagle Games imprint, and it was sort of the first game to really press this notion of “hybrid” design, meaning that it was as much a vintage American-style conflict game as it was a Puerto Rico-style Eurogame. But it was a little tentative- maybe even a touch avant garde in retrospect- and it wasn’t until a couple of years later that hybridization really hit its stride. In 2007, Drover turned up with a Microsoft license and produced Age of Empires III, based on the popular real-time strategy game. By this time, worker placement games like Caylus had become a big deal, and once again he leveraged the new “technology” coming out of the European designers to streamline bigger, more baroque styles of gameplay.

I had mixed feelings about Age of Empires III when it was first released. At the time, it felt somewhat mediocre and where I was as a game player was more in tune with the kinds of things that Fantasy Flight Games were doing. But I’ve had an opportunity to revisit the game extensively with the newly released Empires: Age of Discovery (retitled due to the expiration of the license) and I’ve found that in hindsight, this was – and is – another game that was very much ahead of its time. Yet it not only feels current, it also feels not quite like anything else out there in the worker placement or 4x genre.

And it really is kind of both worker placement and 4x, but it isn’t nearly as complicated as something like a Stefan Feld or Uwe Rosenberg design. It’s also not as cumbersome and overwrought as many 4x games tend to be. It’s surprisingly fluid, lean and with just the right amount of development, narrative, direct conflict and player agency. It’s big (both in terms of scope and its physical size) but it’s also very manageable, easy to teach and it doesn’t bog down in intricacy or process.

Each player represents a European colonial power during the titular Age of Discovery. The goal is to send folks over to the New World, explore it, settle it, make money with trade goods and use that money to fund developments that will make you do all of the above better. You start out with a little seed money (some really nice metal doubloons) and five plain ol’ colonists- these are the workers you will place in the various task slots on the right hand side of the board. Early goals are to send colonists over to see what kind of resistance the natives put up and to establish starter colonies. But eventually the decision tree blossoms into populating existing colonies, grabbing up trade good tiles to make revenue-generating sets, establishing trade fleets and most significantly, assigning colonists to new roles.

One of the really cool things about Empires is how you convert colonists to different roles and there are several of them. Send a guy to become a Missionary, and when you settle with that Missionary he’ll bring an extra colonist along with him. Merchants turn a quick $5 profit when you ship them to a colony. Captains add bonuses to exploration attempts and soldiers increase the amount of plunder you get from resolving discovery tiles. The soldiers are also how you can wage war against your rivals, either in one contested region or in an expensive ($10) war covering all regions where you have sent troops. And there’s also a Builder, who reduces the cost of developments or can earn VPs for sending him as a colonist, presumably bettering the region’s level of civilization.

So you do all of the above by placing those regular colonists in slots and then the whole thing resolves top to bottom in an orderly fashion. There are tons of important placement decisions because there are many ways to win as well as many emergent opportunities to gain advantages but then the actual resolution and the decisions made there are just as significant. This isn’t a complicated game in terms of rules, but it is in terms of the choices you will make during its course.

It is also something of an area control game. At the end of each of three ages or sets of rounds, the player with the most figures in a region gets points with a runner-up award for second- nothing for ties. So it isn’t uncommon to see players jockeying for majorities toward the end of an age, sending colonists and specialists over, launching attacks either through “missionary work” or by putting soldiers in contested areas. It comes to feel something like a Dudes on a Map game in this regard.

But you can also earn points by exploring those discovery tiles that mark each of the New World’s regions and when those run out, there’s a deck of discovery cards that yield big points. There are points to be had in earning money and exploiting sets of trade goods for maximum profit, with these cool plastic carvels representing your merchant fleets (or, in game terms, wild cards for making sets). And there are ways to earn points in the buildings, all of which also impart special abilities. It’s a multi-faceted design that lets the player choose which direction or directions they want to go, and it never feels like there is a programmed, prime route to victory. There’s enough variability systematically and through both direct and indirect player interaction to prevent that from happening.

It’s a satisfying game in many ways. It’s heavier, but not burdensome and it gets to the good stuff without players needing to be five game veterans. Yet it is highly replayable and it rewards coming back to it with a new approach and with a different set of priorities depending on how the game situation evolves. It’s also evocative and interesting in terms of its setting, and it never feels vague or superficial. Its themes of colonialism, exploitation and profit all stick together very well and it gives a good sense of managing such a national enterprise.

Despite being almost ten years old and coming out of a very different time in terms of design sensibilities, Empires: Age of Discovery is still relevant and well worth looking at today. It actually manages to do some things better than recent games in its category, and it manages to walk that high wire between complexity and accessibility extremely well. There’s a lot to do, a lot to accomplish in each game and it’s one that I’m glad I got a second chance to explore at a different time in my gaming life. It’s also great that this is a deluxe, refined edition with great production (tons of plastic, for those that still get excited about that) and a tightened-up rules set. I find myself really looking forward to the upcoming science fiction version of the design, and I’m interested once again in what Glenn Drover is doing next.